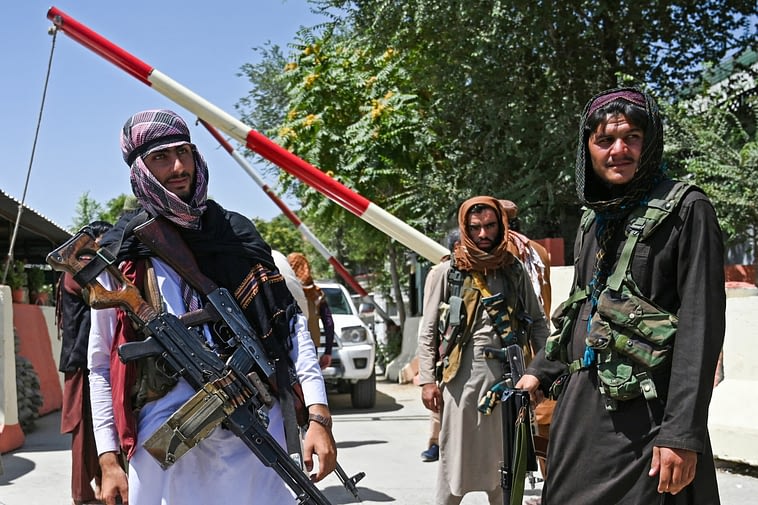 Taliban fighters stand guard along a roadside near the Zanbaq Square in Kabul on August 16, 2021, after a stunningly swift end to Afghanistan’s 20-year war, as thousands of people mobbed the city’s airport trying to flee the group’s feared hardline brand of Islamist rule.

LONDON — World leaders have expressed their dismay and concern at the chaotic scenes coming from Kabul, Afghanistan, with the Taliban now effectively taking control of the country.

Since the U.S. began winding down its Afghan operation, the Taliban — which seeks to enforce an austere version of Islamic law — has been seizing new territory on an almost daily basis. It took Kabul on Sunday and took over the presidential palace, a move that marked the end of about 20 years of American military presence on the ground.

“I think it is very important the West collectively should work together to get over to that new government, be it by the Taliban or anybody else, that nobody wants Afghanistan, once again, to be a breeding ground for terror.”

The U.K.’s Defense Secretary Ben Wallace confirmed to told Sky News Monday that it was not in the country’s plans to send troops back to Afghanistan.

‘West has made mistakes’

In Italy, Foreign Affairs Minister Luigi di Maio shared a similar message, telling the newspaper Corriere della Sera on Sunday that there would be no new military commitment to Afghanistan.

“Surely the West has made mistakes and it is right to admit it,” di Maio said, according to an NBC News translation of the interview.

“Over the past 20 years, attempts have been made to put a barrier to the power and ideology of the Taliban, but if the advance in recent days has been so fast and rapid, we must at least ask ourselves what the reasons are,” he added.

Germany announced Sunday an evacuation of as many employees as possible in Kabul, though a “core team” will remain on the ground, according to Heiko Mass, the country’s minister for foreign affairs. Speaking on Monday, Chancellor Angela Merkel told her party that the latest developments in Afghanistan will have to be dealt with for a very long time to come, according to Reuters.

Merkel reportedly added that Germany must help Afghanistan’s neighbors in dealing with refugees.

In view of the rapid advance of the Taliban in Afghanistan, the Bundeswehr plans to begin evacuating German citizens and local Afghan forces from Kabul on Monday 16th August, 2021.

The United Nations Security Council is due to speak Monday for an emergency meeting on Afghanistan.

Meanwhile, Ireland’s Minister of Trade Leo Varadkar said Monday: “Shocking news from Afghanistan. Particularly concerned for the women and girls of the country. Ireland will continue to use its voice on the UN Security Council to condemn Taliban violence and prevent further suffering.”

Antonio Guterres, the secretary general of the United Nations said Sunday on Twitter: “Conflict in Afghanistan is forcing hundreds of thousands to flee amid reports of serious human rights violations. All abuses must stop.”

Hours earlier, the head of the NATO alliance, Jens-Stoltenberg said he had spoken with representatives from the U.K., Canada, Denmark and the Netherlands about the situation in Afghanistan.

“NATO is helping keep Kabul airport open to facilitate and coordinate evacuations,” he said via Twitter.

In April, U.S. President Joe Biden ordered the withdrawal of American soldiers before Sept. 11 — a decision that he reiterated last week when saying that the U.S. had spent over a trillion dollars over 20 years, trained and equipped the Afghan forces.

However, the departure of American troops and its allies is being overshadowed by the fast deployment of the Taliban forces and the subsequent chaotic scenes of citizens trying to flee the nation.

A spokesperson for the Taliban, Suhail Shaheen, told the BBC Sunday that the militants want a “peaceful” transition.

China has decided to keep its embassy in Kabul open, although it is advising its citizens to stay indoors. A spokesperson for the Chinese government, Hua Chunying, said that Beijing expects a smooth transfer of power and called for crimes and terrorism to be contained, according to NBC News.

Russia is taking a similar approach, having decided to keep its embassy in Kabul open. About 100 employees will be moved, a spokesperson for the Russian government told Reuters, adding that some will be on vacation, while others will not be around to avoid having too much of a presence.

Russian ambassador Dmitrij Zhirnov is due to meet with the Taliban in Kabul on Tuesday, according to the Russian foreign ministry.