In this undated photo provided by Virgin Orbit on Monday, Jan. 9, 2023, Virgin Atlantic Cosmic Girl, a repurposed Virgin Atlantic Boeing 747 aircraft that will carry a rocket, is parked at Spaceport Cornwall, at Cornwall Airport in Newquay, England. Engineers are making final preparations for the first satellite launch from the U.K. later Monday, when a repurposed passenger plane is expected to release a Virgin Orbit rocket carrying several small satellites into space. (Virgin Orbit via AP) 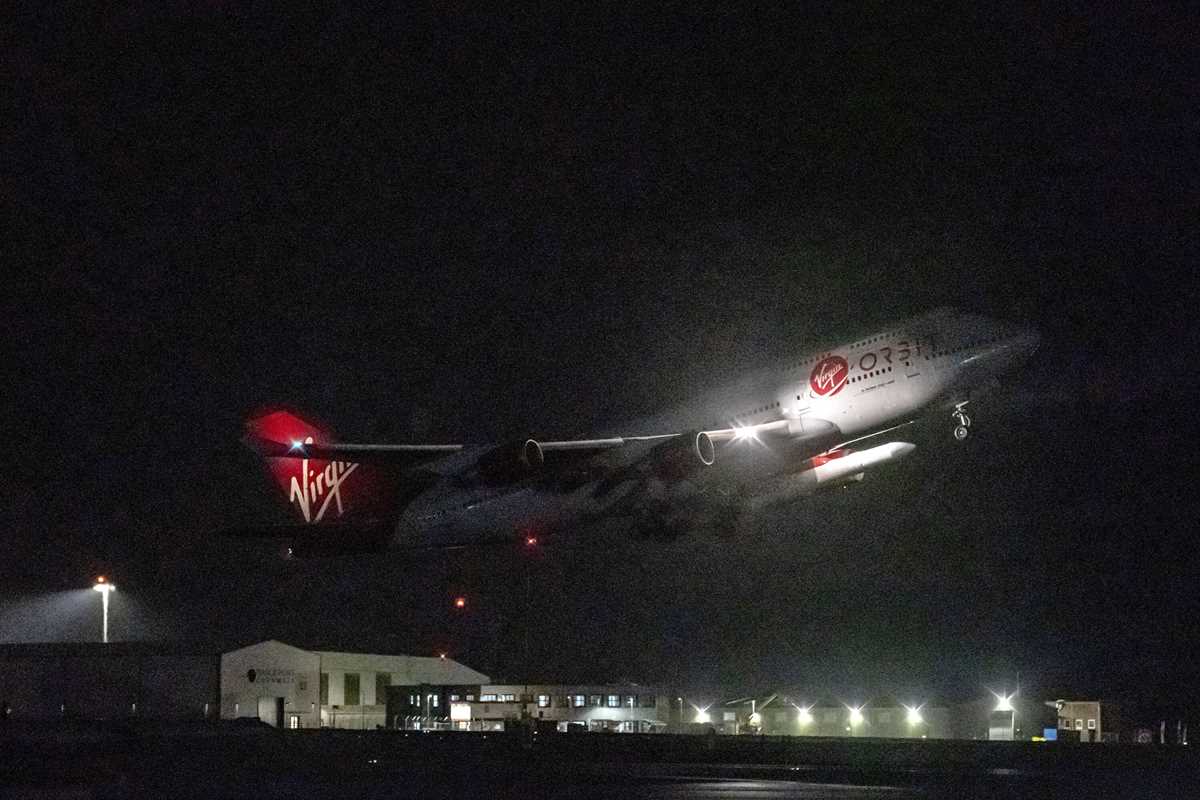 A repurposed Virgin Atlantic Boeing 747 aircraft, named Cosmic Girl, carrying Virgin Orbit’s LauncherOne rocket, takes off from Spaceport Cornwall at Cornwall Airport, Newquay, England, Monday, Jan. 9, 2023. The plane will carry the rocket to 35,000 feet where it will be released over the Atlantic Ocean to the south of Ireland, as part of the Start Me Up mission and the first rocket launch from U.K. The rocket will take multiple small satellites, with a variety of civil and defence applications, into orbit. (Ben Birchall/PA via AP)

LONDON (AP) — Virgin Orbit said Thursday its first attempt to launch satellites into orbit from the U.K. failed after its rocket’s upper stage prematurely shut down.

The U.S.-based company used a modified Boeing 747 plane to carry one of its rockets from Cornwall in southwestern England over the Atlantic Ocean on Monday. The plane released the rocket, which carried nine small satellites, but the rocket failed to reach orbit.

In a statement Thursday, Virgin Orbit said initial data indicated that the first stage of the rocket performed as expected. It said the rocket reached space altitudes, and that stage separation and ignition of the upper stage occurred in line with the mission plan.

But it said that later in the mission, at an altitude of approximately 180 kilometers (112 miles), “the upper stage experienced an anomaly. This anomaly prematurely ended the first burn of the upper stage,” the company said.

The plane, piloted by a Royal Air Force pilot, returned to Cornwall. The rocket components and the satellites were destroyed.

The launch failure was a disappointment to the company and U.K. space officials, who had high hopes that the mission — the first such one to be attempted from Europe — would be the beginning of more commercial space launch ventures.

Virgin Orbit, which was founded by British billionaire Richard Branson in 2017, began commercial launching services in 2021. It had previously successfully completed four similar launches from California, carrying payloads for businesses and governmental agencies into orbit.

The company has launched an investigation into the source of the second stage failure on Monday. It said it plans to carry out its next mission from the Mojave Air and Space Port in California, and that it is in talks with officials and businesses to return to the U.K. for another potential launch “as soon as later this year.”

Before you consider Boeing, you’ll want to hear this.

MarketBeat keeps track of Wall Street’s top-rated and best performing research analysts and the stocks they recommend to their clients on a daily basis. MarketBeat has identified the five stocks that top analysts are quietly whispering to their clients to buy now before the broader market catches on… and Boeing wasn’t on the list.

While Boeing currently has a “Moderate Buy” rating among analysts, top-rated analysts believe these five stocks are better buys.