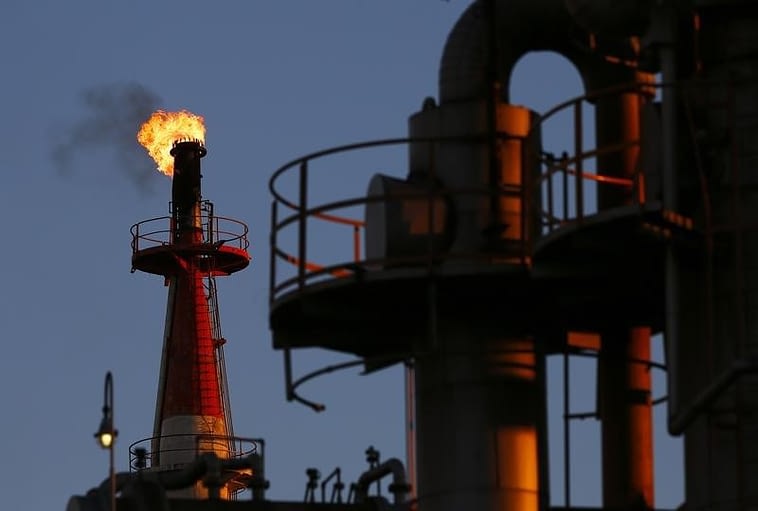 NEW YORK/HOUSTON (Reuters) -Prices of heavy sour grades have been rising in the U.S. Gulf Coast, traders said, as the market braces for a disruption of supplies from Mexico in the wake of a fire that has cut state-run Pemex’s oil output by about 25% since Sunday.

At least five workers were killed and six injured in the blaze, which broke out on an offshore platform in the southern Gulf of Mexico operated by Petroleos Mexicanos, halting production of more than 400,000 barrels per day (bpd), the company said on Monday.

It could take weeks for output and exports to return to normal, people familiar with the matter said, even as work is underway to restore power to the facility by Wednesday, and later connect 125 idled wells at the Ku-Maloob-Zaap (KMZ) cluster, Mexico’s largest with a 750,000-bpd average output.

Pemex did not reply to a request for comment.

On Monday, Chief Executive Octavio Romero Oropeza said Mexico’s monthly production and exports could fall, but the overall impact of the accident has not yet been estimated.

Before the fire, Mars crude had traded at the weakest levels in about a month, but prices on Tuesday were seen trading at a $2.35 discount to benchmark futures, dealers said, stronger than the $2.65 discount a day earlier.

Western Canadian Select (WCS) in Alberta also started to strengthen on news of the outage, they added.

Chevron Corp (NYSE:), Phillips 66 (NYSE:) and Valero Energy (NYSE:) are scheduled to receive Mexican crude cargoes in coming days, according to people familiar with the trade.

Valero aims to load a cargo on Tuesday, sourcing the barrels from onshore Pemex storage tanks at the Pajaritos terminal, they said. Pemex’s Deer Park, Texas, refinery has not been affected, a spokesperson said.

Chevron, Phillips 66 and Valero did not respond to requests for comment.

Among the challenges to fully restoring output is to clear a cloud of around the facilities, a person familiar with Pemex operations said.

Refining and trading firms are preparing for cargo delivery delays and the possibility of force majeure by Pemex, traders said.

The accident, which interrupted gas supply needed for oil production at KMZ’s fields, increasingly threatens the active flow of Mexican oil, especially Maya crude, to the U.S. Gulf Coast, where many refineries use it as their main source of heavy sour crude.

“There will definitely be some issues (with flows and deliveries),” the person familiar with Pemex operations said.

Three traders who are regular buyers of Maya crude for the United States and Europe said they expect a force majeure notice by Pemex if producing wells are no reconnected in the coming days.

But it is yet unclear if force majeure, or contract suspensions, will be necessary. Pemex is seeking to drain crude inventories from onshore and offshore storage to fulfill export commitments, sources said.

A former Pemex executive familiar with KMZ operations said the cluster has oil storage capacity that allows “several days” of autonomy, which could be exhausted before declaring force majeure.

“It is premature yet,” said a top Pemex official when asked Tuesday if force majeure would be declared soon.