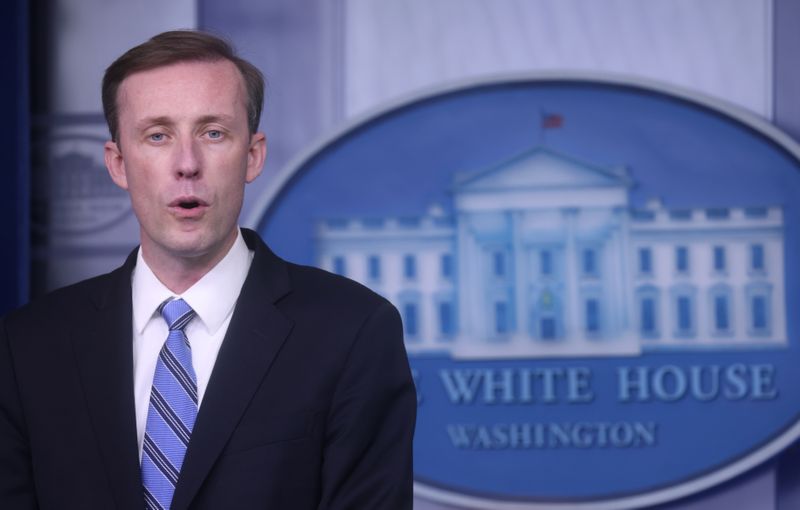 © Reuters. U.S. national security adviser Jake Sullivan gives a statement about the situation in Afghanistan during a news briefing at the White House in Washington, U.S., August 23, 2021. REUTERS/Leah Millis

WASHINGTON (Reuters) -U.S. President Joe Biden’s national security adviser on Monday said he had not heard the president discuss any plans to fire, reassign or ask for the resignation of any White House or U.S. officials over the situation in Afghanistan.

“I have not heard him say so,” Jake Sullivan told reporters at the White House, when asked if Biden had plans to take disciplinary action against U.S. officials after the Taliban’s lightning-fast takeover of the country this month.

Biden has repeatedly defended his decision to withdraw U.S. forces from Afghanistan, and said he took responsibility for making the decision to end the 20-year war.

Biden has said that the Taliban’s march into Kabul unfolded more quickly than anticipated, raising questions about a possible intelligence failure.

Sullivan said Biden was considering whether to extend his Aug. 31 deadline for withdrawing U.S. forces from Afghanistan, amid mounting pressure to do so from Britain, France and other U.S. allies.

He said U.S. officials were in daily contact with the Taliban and U.S. allies about the issue, but saw substantial progress in the military operation to evacuate U.S. citizens, people from third countries and vulnerable Afghans.

“The president will make his own determination,” he said.