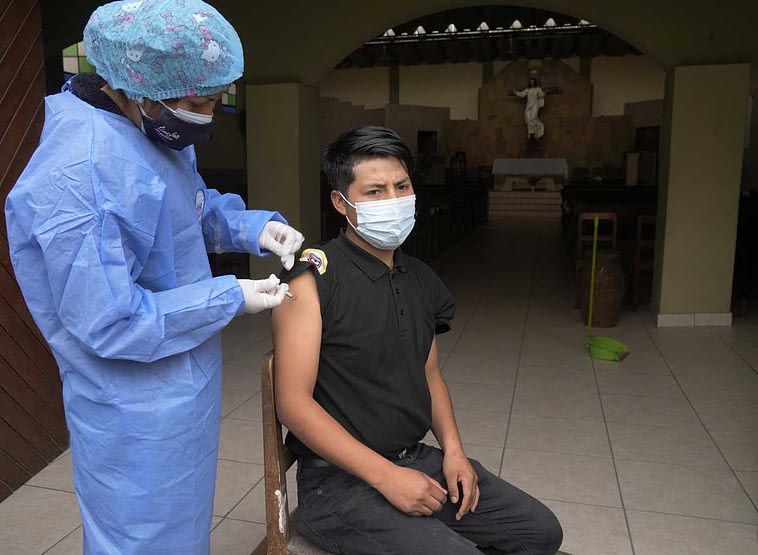 A nurse gives a shot of the Sinopharm COVID-19 vaccine to Cesar Tapia at the door of a church during a house to house vaccination campaign in the Villa Maria del Triunfo neighborhood of Lima, Peru, Wednesday, Oct. 13, 2021. (AP Photo/Martin Mejia) 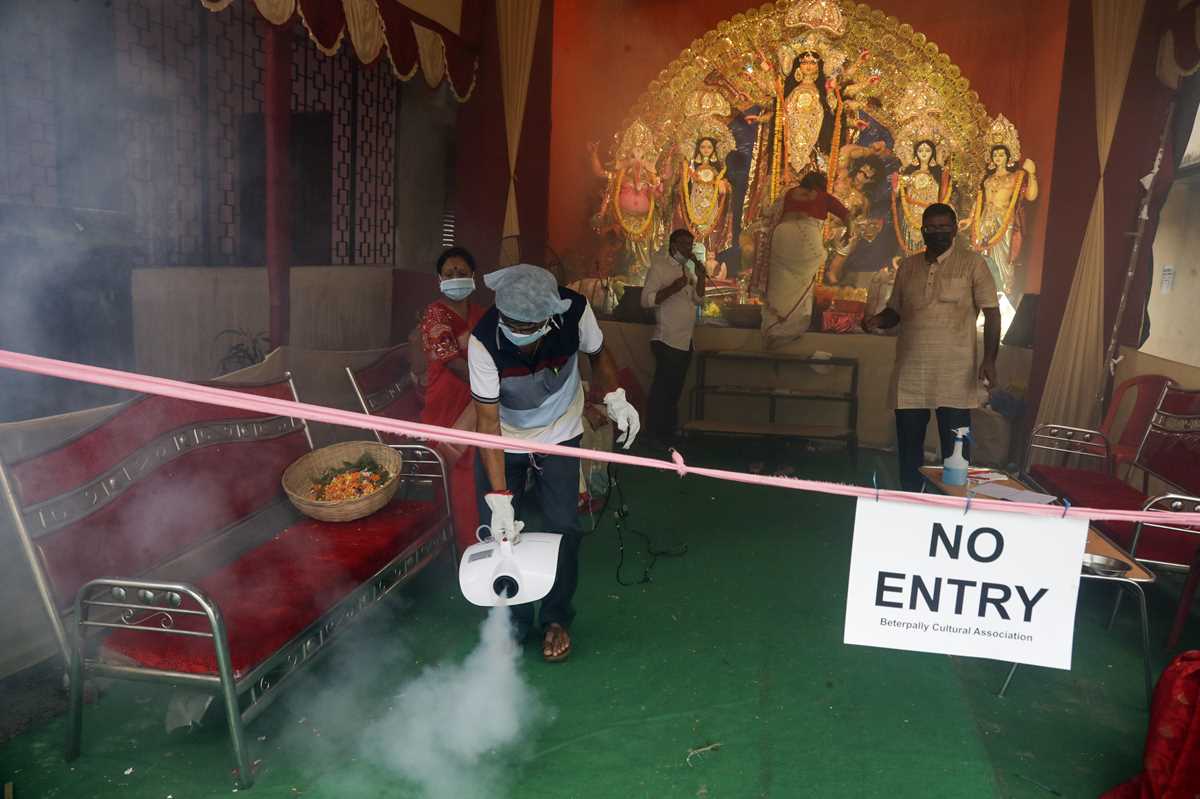 A volunteer sanitizes a makeshift public worship place for Hindu goddess Durga in Kolkata, India, Wednesday, Oct. 13, 2021. The five-day festival commemorates the slaying of a demon king by goddess Durga, marking the triumph of good over evil. (AP Photo/Bikas Das) 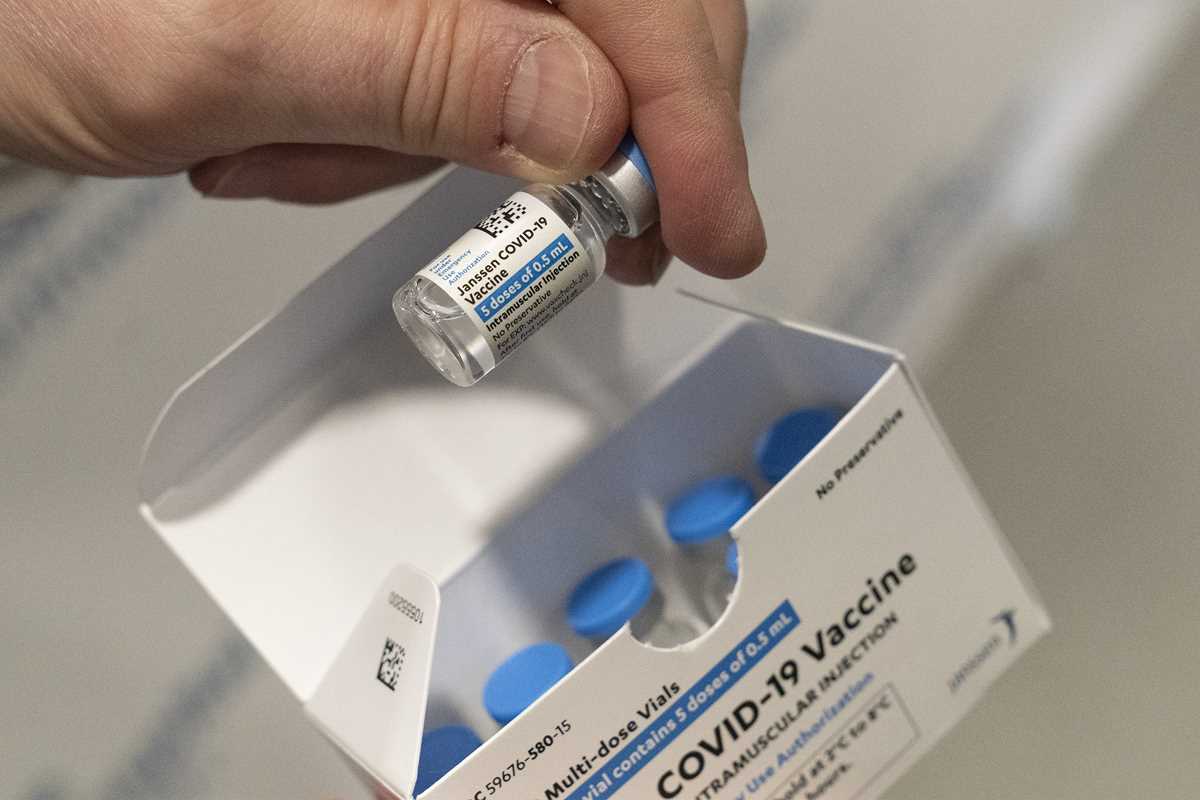 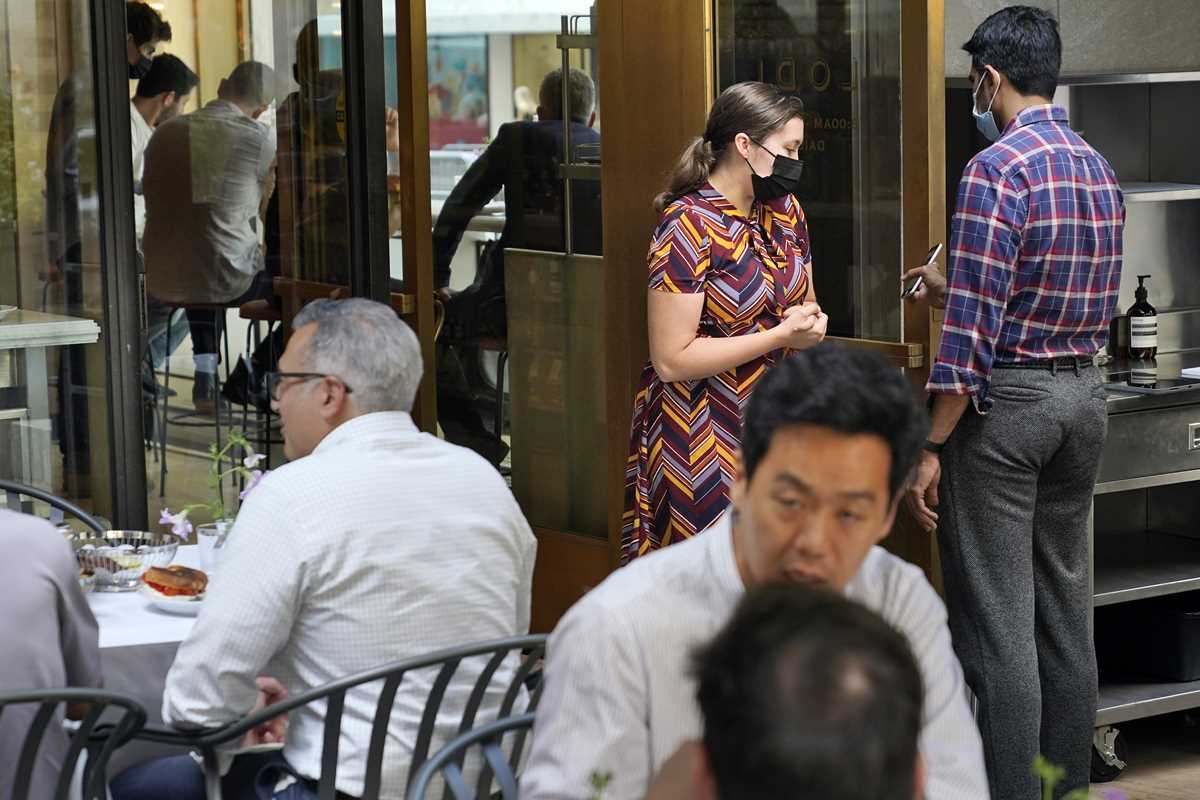 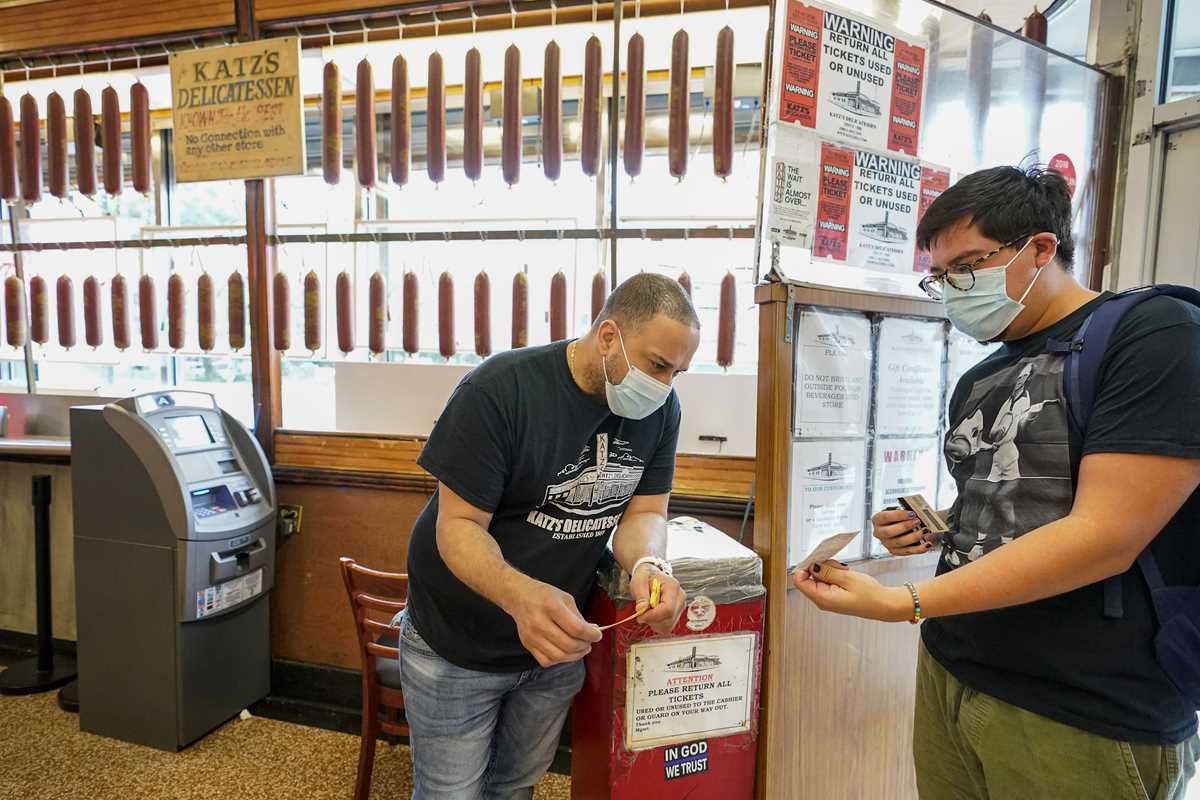 FILE — In this Aug. 17, 2021 file photo, a Katz’s Deli employee, left, checks the proof of vaccination from a customer who will be eating inside the restaurant, in New York. New York City’s COVID-19 vaccination mandate for restaurants, gyms and entertainment venues is going so well that only 15 businesses have been fined for not enforcing the policy, Mayor Bill de Blasio said Wednesday, Oct. 13, 2021. (AP Photo/Mary Altaffer, File) 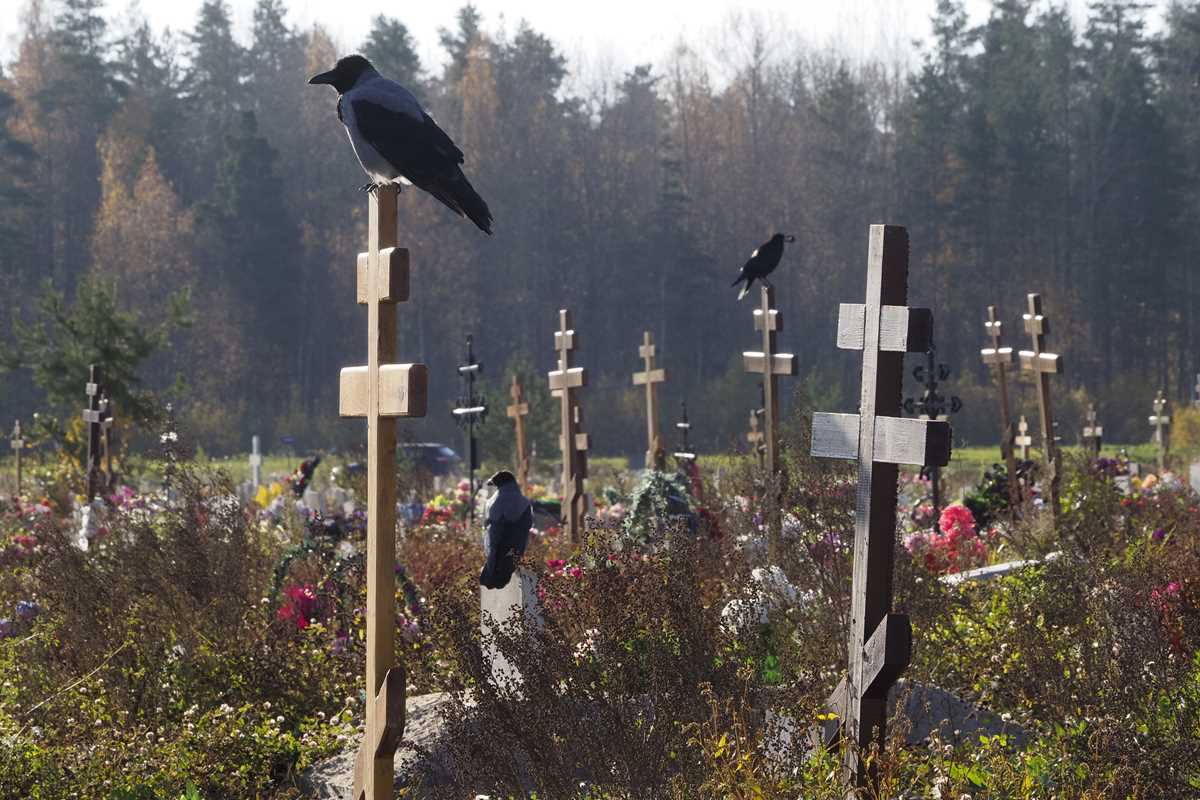 Crows sit on grave crosses in the section of a cemetery reserved for coronavirus victims in Kolpino, outside St. Petersburg, Russia, Tuesday, Oct. 12, 2021. Russia hit another record of daily coronavirus deaths Tuesday as the country struggled with a rapid surge of infections and lagging vaccination rates, but authorities have been adamant that there would be no new national lockdown. (AP Photo/Dmitri Lovetsky) 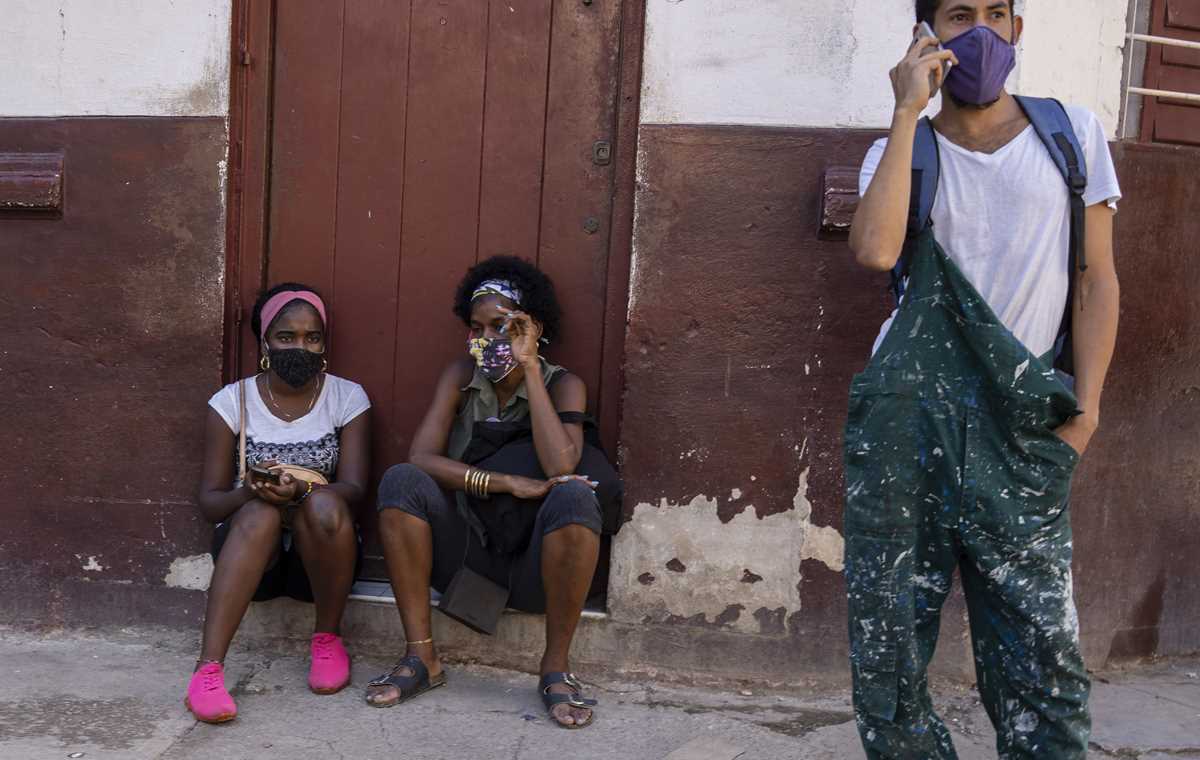 People wear masks during the COVID-19 pandemic outside a grocery store where they wait for it to open in Havana, Cuba, Tuesday, Oct. 12, 2021. (AP Photo/Ramon Espinosa) 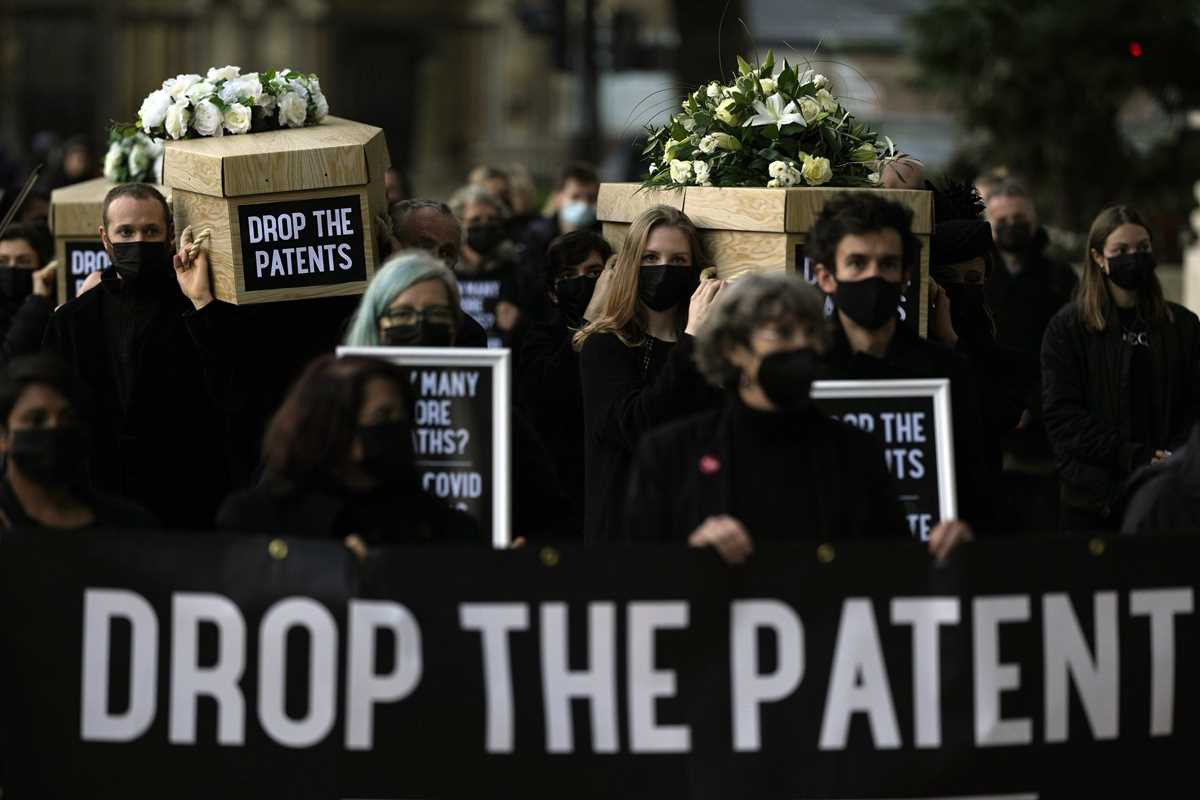 SAN FRANCISCO — About 800 San Francisco city workers have asked for medical or religions exemptions to avoid a looming deadline for them to get vaccinated against the coronavirus or lose their jobs. So far, the city has not approved a single request.

That’s according to a city human resources official, who said about 5.5% of the city’s 35,000-employee workforce have not complied with the mandate to be fully vaccinated by Nov. 1.

Police officers, firefighters and other employees who work in high-risk settings were told to be vaccinated by Wednesday. However, among that group, 260 police, fire and sheriff’s employees sought religious or medical waivers.

A spokesman for the police union says 120 officers face termination because they didn’t meet the deadline.

MORE ON THE PANDEMIC:

— Russia, WHO differ on when approval will come for Sputnik V

See all of AP’s pandemic coverage at https://apnews.com/hub/coronavirus-pandemic

HERE’S WHAT ELSE IS HAPPENING:

HELENA, Montana — Montana has set a new high for the number of people hospitalized with COVID-19 — 510.

The number reported Wednesday surpassed the previous high of 506 hospitalizations recorded Nov. 20, 2020, before any coronavirus vaccines were available.

Gov. Greg Gianforte issued a statement urging Montanans to get vaccinated, but added that “we will not mandate them.”

Meanwhile, the school district in Livingston, Montana, shifted its middle and high school classes to remote learning to slow the spread of the coronavirus among students. Officials said few students have used masks.

Plant-based baby nutrition stock could be bigger than Beyond Meat.

The school board voted Tuesday to have remote learning for its 740 middle and high school students until Oct. 25, because there are 17 coronavirus cases each at Park High School and Sleeping Giant Middle School.

HONOLULU — Organizers are planning for the Honolulu Marathon even though it’s not clear government officials will allow it to be held in December.

Hawaii Public Radio reports marathon organizers are frustrated that Honolulu is easing pandemic-related restrictions on large events but neither Hawaii’s governor nor Honolulu’s mayor have provided clarity about whether the marathon can happen with the thousands of participants it normally draws.

Other large marathons in Boston and Chicago were held recently.

SAN DIEGO — Beleaguered business owners and families separated by a nonessential travel ban are celebrating after the Biden administration says it will reopen U.S. land borders next month.

Travel across land borders from Canada and Mexico has been largely restricted to workers whose jobs are deemed essential. New rules will allow fully vaccinated foreign nationals to enter the U.S. regardless of the reason starting in early November.

Unlike air travel, for which proof of a negative COVID-19 test is required before boarding a flight to enter the U.S., no testing will be required to enter the U.S. by land or sea, provided the travelers meet the vaccination requirement.

The 19-month coronavirus restrictions had economic, social and cultural impact, preventing shopping and cross-border family gatherings when relatives live on different sides of the border.

In Del Rio, Texas, Mexican visitors account for about 65% of retail sales, said Blanca Larson, executive director of the chamber of commerce and visitors bureau in the city of 35,000 people. “Along the border, we’re like more of one community than two different communities,” she said.

Fully vaccinated U.S. citizens and permanent residents have been allowed into Canada since August, provided they have waited at least two weeks since getting their second vaccine dose and can show proof of a recent negative COVID-19 test. Mexico has not enforced coronavirus entry procedures for land travelers.

PORTLAND, Maine — A federal judge declined Wednesday to intervene to stop Democratic Gov. Janet Mills’ requirement that health care workers be vaccinated against COVID-19 by the end of the month.

U.S. District Court Judge Jon Levy says none of the nine plaintiffs met the legal threshold for an injunction to halt the requirement to be fully vaccinated by Oct. 29 or lose their jobs.

Levy ruled the record indicates regular testing alone is not sufficient to stop the spread of the delta variant.

“The speed of the delta variant’s transmission outpaces test-result availability,” he wrote. Daily testing, he wrote, would require use of rapid tests that are both less accurate and in short supply.

The judge concluded the plaintiffs were unable to show an injunction was in the public interest or that they had a strong likelihood of prevailing if the lawsuit moves forward. The Liberty Counsel, which filed the lawsuit in August, vowed to appeal.

The College of Physicians of Bucharest wrote a letter addressed to Romanians that says the medical system has “reached the limit.”

On Wednesday, Romania confirmed 15,733 new infections and 390 deaths, bringing the total number of deaths to 40,461. Data from health authorities indicate that more than 90% of coronavirus patients who died last week were unvaccinated.

Hungary has agreed to provide care to several dozen COVID-19 patients from Romania in the coming days to help ease the burden on hospitals.

“Only anonymous guys are leading this fight,” Zaharia told The Associated Press. “It’s heartbreaking for us when we know that a lot of those who died could have lived, if they would have been vaccinated.”

BOSTON — More than 800 people who work for Boston have been suspended without pay for failing to comply with the city’s coronavirus vaccine mandate.

Acting Mayor Kim Janey announced in August the city’s roughly 18,000 employees would be required to either show proof of vaccination or submit to regular testing.

Janey says the suspended employees who didn’t meet Tuesday’s initial deadline came from five “public facing” agencies, including the public schools department, libraries, the center for youth and families, the disability commission and the age commission. Workers who continue to ignore the mandate face termination, she said. The school department alone has about 11,000 employees.

The city is making plans to deal with potential staffing shortfalls, which so far accounts for less than 1% of workers. Suspended employees can return to work by providing proof of a negative test.

GENEVA — The World Health Organization says the number of global coronavirus cases fell in the last week, continuing a downward trend that began in late August.

In its latest weekly assessment of the pandemic published on Wednesday, the U.N. health agency says there were about 2.8 million new cases and 46,000 confirmed deaths in the last week, a drop of 7% and 10% respectively. Europe reported a 7% rise in cases, while all other world regions reported a decrease.

WHO says Europe also had the biggest rise in deaths in the previous week, with 11% more COVID-19 deaths. WHO says the highest numbers of new cases in Europe were reported in Britain, Turkey and Russia.

The biggest drops in cases came in Africa and the Western Pacific, where case numbers fell by 32% and 27%, respectively. Deaths in both regions fell by more than a third.

WASHINGTON — The Food and Drug Administration is wrestling with how to decide on booster doses of the single-shot Johnson & Johnson COVID-19 vaccine.

On Thursday and Friday, an FDA advisory panel will recommend whether to back boosters of both the J&J and Moderna vaccines. An extra dose of Pfizer’s vaccine already is available to certain Americans.

Pfizer and Moderna have provided the majority of U.S. COVID-19 vaccines. More than 170 million Americans have been fully vaccinated with those two-dose shots while less than 15 million Americans got the J&J shot.

MOSCOW — The head of the Russian sovereign fund bankrolling the shot says Russia is ready to provide up to 300 million doses of its Sputnik V vaccine to the U.N.-backed COVAX initiative.

That’s despite the lack of WHO approval and Sputnik V vaccine production issues that are drawing concerns worldwide. Russian Direct Investment Fund CEO Kirill Dmitriev and the World Health Organization had vastly different takes Wednesday on when the Russian vaccine would get WHO’s stamp of approval.

Sputnik V is already being used in 70 countries around the world despite not yet authorized by the U.N. health agency. Some officials in countries, especially in Latin America, have expressed concerns they aren’t getting the vaccine’s second shot in time to properly innoculate their people.

MIAMI — Families of COVID-19 patients are asking hospitals to rethink visitor policies a year and a half into the pandemic, which has killed 716,000 people in the U.S.

The relatives say they’re being denied the right to be with loved ones at a crucial time. Doctors also are increasingly telling hospitals to relax restrictions to allow patients to see their families.

Hospitals in at least a half-dozen states have loosened restrictions governing visits to COVID patients. Others, however, are standing firm, backed by studies and industry groups that indicate such policies have been crucial to keeping hospital-acquired infections low.

The University of Utah Health this year announced its hospitals would allow up to two adult visitors for the entire hospital stay with protective equipment and recently vaccinated or recovered from the virus. Many hospitals have made exceptions only for coronavirus patients who are about to die.

The Kremlin has attributed the mounting contagion and deaths to slow vaccinations. Prime Minister Mikhail Mishustin said Tuesday about 29% of the country’s nearly 146 million people were fully vaccinated.

President Vladimir Putin emphasized the need to speed up the vaccination rate on Tuesday, but he also has cautioned against forcing people to get the shots. Health experts have attributed the slow pace of vaccination to widespread vaccine skepticism and disinformation.

The Kremlin has ruled out a new nationwide lockdown similar to the one during the first months of the pandemic that badly crippled the economy and dented Putin’s ratings. It has delegated the power to enforce coronavirus restrictions to regional authorities.

Before you consider Johnson & Johnson, you’ll want to hear this.

MarketBeat keeps track of Wall Street’s top-rated and best performing research analysts and the stocks they recommend to their clients on a daily basis. MarketBeat has identified the five stocks that top analysts are quietly whispering to their clients to buy now before the broader market catches on… and Johnson & Johnson wasn’t on the list.

While Johnson & Johnson currently has a “Buy” rating among analysts, top-rated analysts believe these five stocks are better buys.