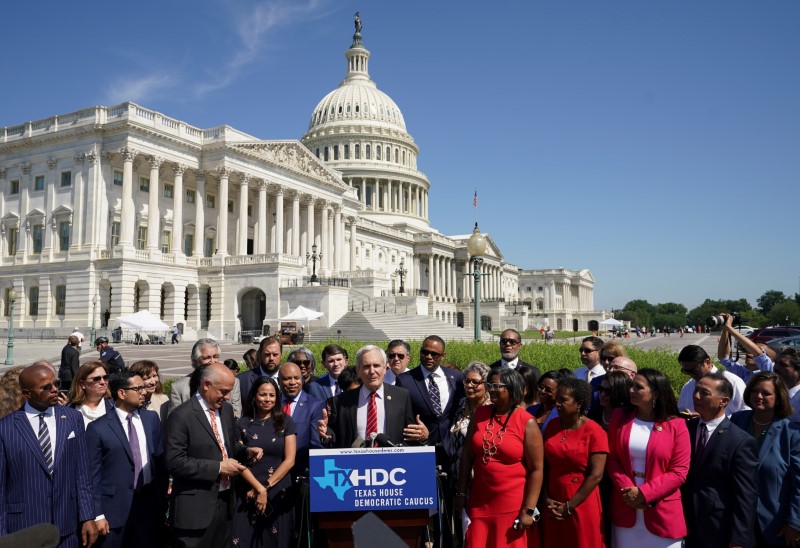 © Reuters. FILE PHOTO: Congressman Lloyd Doggett (D-TX) joins other Democratic members of the Texas House of Representatives, who are boycotting a special session of the legislature in an effort to block Republican-backed voting restrictions, as they speak in front of the U.S. Capitol in Washington, U.S., July 13, 2021. REUTERS/Kevin Lamarque

(Reuters) -The Texas Supreme Court on Tuesday blocked a rule protecting state Democratic lawmakers from arrest after they went to Washington to avoid a quorum as state Republicans attempt to pass voting restriction measures, the Washington Post reported.

Texas Governor Greg Abbott, a Republican, vowed to arrest more than 50 Democratic lawmakers who left the state on July 12, denying the state House of Representatives the quorum required to approve the voting limits and other measures on his special-session agenda.

On Sunday, Texas District Judge Brad Urrutia issued a temporary restraining order in a case filed by 19 Texas House Democrats against Abbott, challenging the state’s power to arrest them for political purposes, the Washington Post reported.

Texas is among several Republican-led states pursuing new voting restrictions in the name of enhancing election security. Former President Donald Trump has claimed falsely that the presidential election last November was stolen from him through widespread fraud.