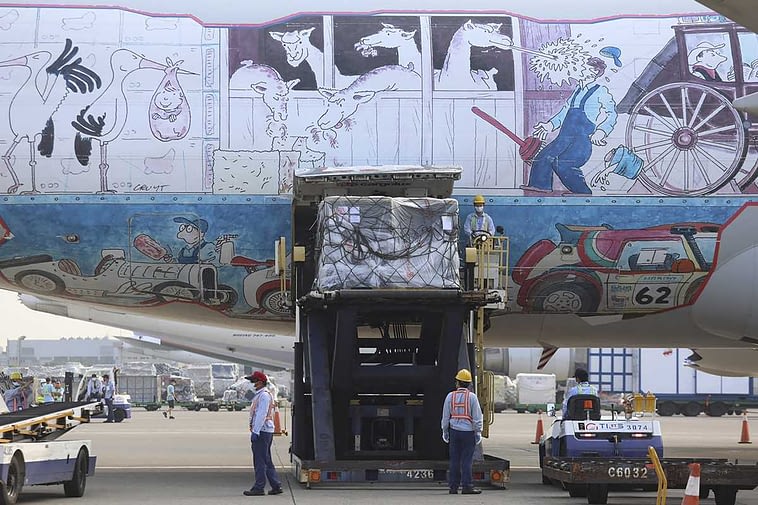 In this photo released by the Taiwan Centers for Disease Control, workers unload a shipment of Pfizer-BioNTech vaccines from an aircraft at the Taoyuan International Airport in Taiwan Thursday, Sept. 2, 2021. Taiwan received its first batch of Pfizer-BioNTech vaccines Thursday after a prolonged purchasing process that gave rise to a political blame game with China. (Taiwan Centers for Disease Control via AP) 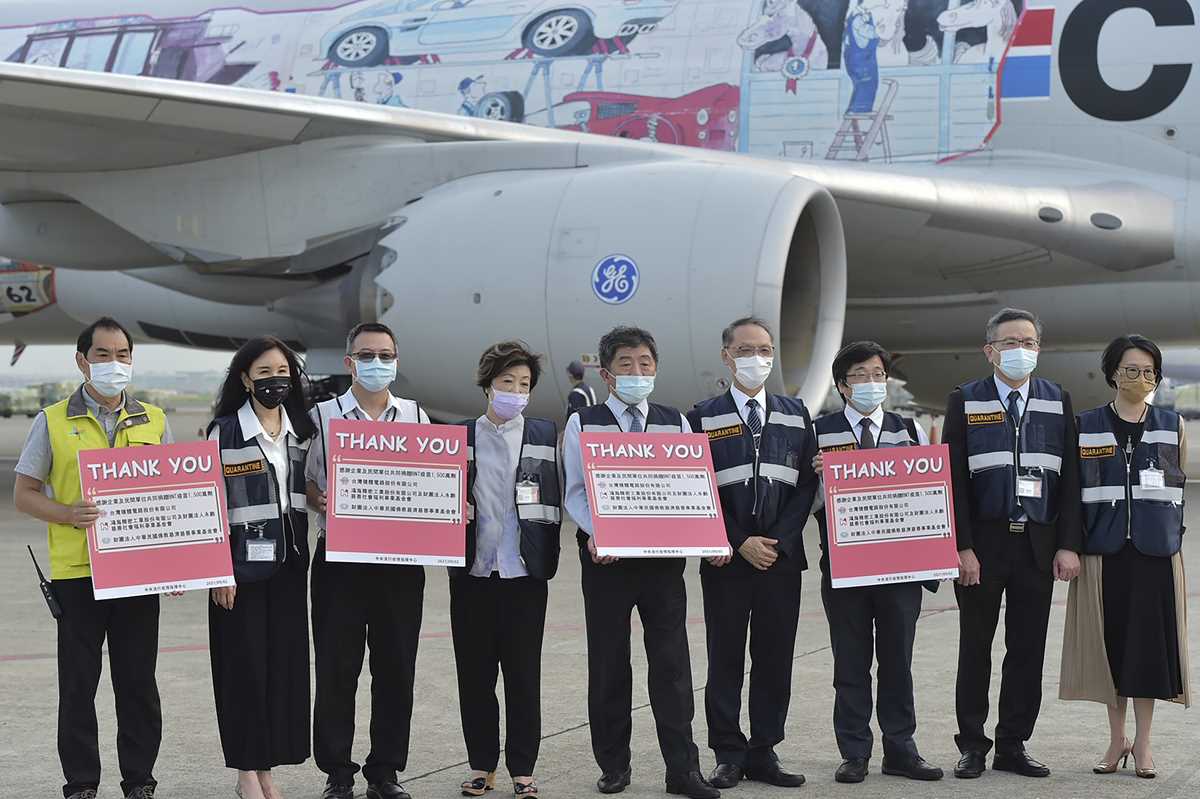 In this photo released by the Taiwan Centers for Disease Control, Taiwan’s Health Minister Chen Shih-chung, fifth from right, poses with thank you cards with other officials and workers after receiving a shipment of Pfizer-BioNTech vaccines at the Taoyuan International Airport in Taiwan Thursday, Sept. 2, 2021. Taiwan received its first batch of Pfizer-BioNTech vaccines Thursday after a prolonged purchasing process that gave rise to a political blame game with China. (Taiwan Centers for Disease Control via AP)

Taiwan had been unable to buy the vaccine itself directly from BioNTech, the German company that had partnered with U.S.-based Pfizer to develop the mRNA vaccine.

Taiwanese President Tsai Ing-wen earlier accused China of blocking Taiwan from getting the Pfizer vaccine through BioNTech, saying that they had all but signed the contracts when the deal was delayed indefinitely. China has denied any interference.

Eventually, two private companies, Taiwan Semiconductor Manufacturing Corp. and Hon Hai Precision Electronics, as well as a Buddhist organization Tzu Chi, stepped in to buy the vaccines and donate them to Taiwan.

The three organizations bought a total of 15 million doses. The flight carrying the first 930,000 doses arrived at Taoyuan International Airport on Thursday morning.

Even their arrival has been dogged by politics. Local media at first reported Taiwan was getting doses ahead of schedule because they weren’t needed in mainland China, where the Pfizer-BioNTech vaccine has not yet been cleared for use.

Health Minister Chen Shih-chung said last week that he had been told by TSMC that the vaccines would have simplified Chinese labels from China. Taiwan uses traditional, rather than simplified, Chinese characters. However, he emphasized that what mattered was the safety and the quality of the vaccine, not the labeling.

Chinese company Fosun Pharma has distribution rights for the vaccine in Greater China, a phrase Beijing says includes Taiwan. Fosun said on its social media Wednesday that it had supplied the batch of vaccines that was due to arrive.

The Pfizer-BioNTech vaccine will be given to 12-17-year-olds, Taiwan’s Centers for Disease Control had said.

I believe we’re on the cusp of something we haven’t seen in 20 years. Fortunes will be made and lost.

Taiwan has been using AstraZeneca, Moderna and the domestically made Medigen vaccine in its campaign so far and has vaccinated 43% of its population with at least one dose. The island’s policy is to give out first doses widely.

Before you consider Pfizer, you’ll want to hear this.

MarketBeat keeps track of Wall Street’s top-rated and best performing research analysts and the stocks they recommend to their clients on a daily basis. MarketBeat has identified the five stocks that top analysts are quietly whispering to their clients to buy now before the broader market catches on… and Pfizer wasn’t on the list.

While Pfizer currently has a “Hold” rating among analysts, top-rated analysts believe these five stocks are better buys.