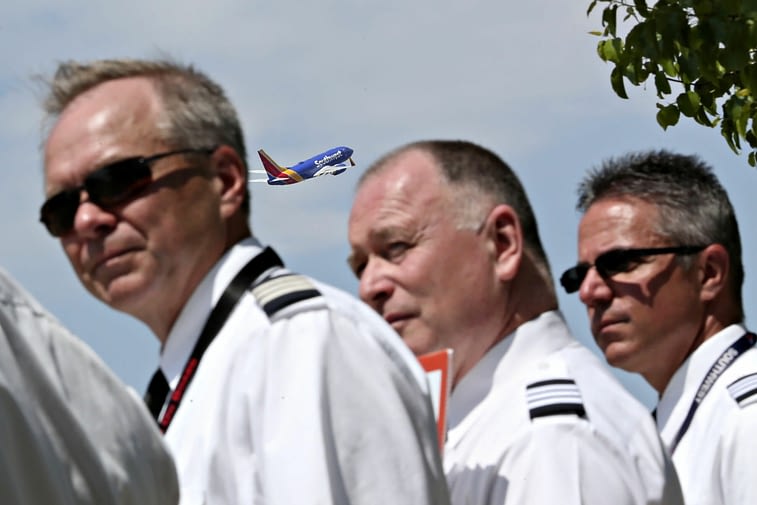 A Southwest Airlines Co. plane takes off as representatives and pilots from the Southwest Airlines Pilots’ Association (SWAPA) demonstrate outside Chicago Midway International Airport (MDW) in Chicago, Illinois, U.S., on Wednesday, May 18, 2016.

Those included changes to work conditions and pilot pay rules and rates, such as an “emergency” time-off program, according to the lawsuit, which the Southwest Airlines Pilots Association filed in federal court in Dallas on Monday.

Southwest denied the allegations that its changed required negotiation with the union.

“Southwest Airlines, like the rest of the industry, has been forced to respond to the unpredictable challenges presented by the global COVID-19 pandemic,” Russell McCrady, Southwest’s vice president of labor relations said in a statement. “The airline disagrees with SWAPA’s claims that any COVID-related changes over the past few months required negotiation.”

The pilots union said in the complaint that it is seeking an injunction to force the company to revert to the terms of their collective bargaining agreement.

The lawsuit comes as tensions between Southwest’s workers and management are on the rise.

Southwest pilots’ labor union this month said it was considering pickets at airports over Thanksgiving and Christmas to protest work conditions.

The company last week said it would scale back its schedules for the rest of the year, following complaints about exhaustion from staff. Pilots and flight attendants have also complained about a shortage of hotels and food options while on the road.

Southwest told workers this week that it is negotiating an agreement with a “food delivery service provider” to deliver hot food to hotels during overnight trips.

“Southwest will cover the cost of the monthly subscription to this service, and we are negotiating to remove delivery fees and significantly reduce service fees,” wrote Rachel Loudermilk, director base operations in an email to staff.