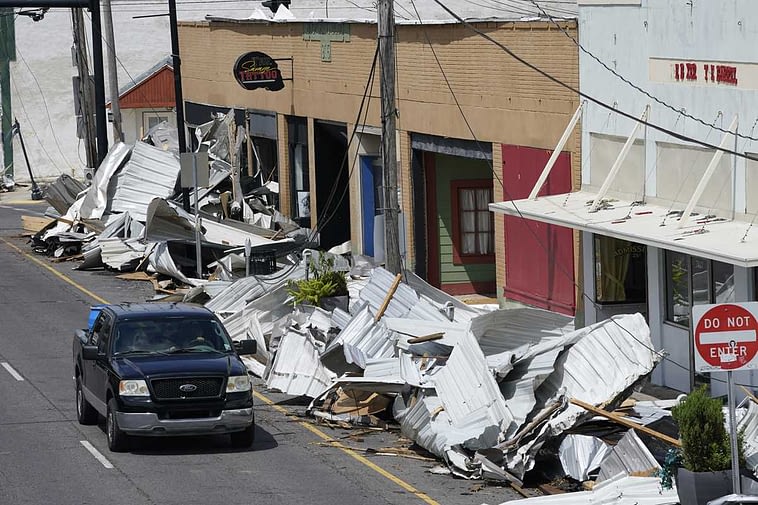 Traffic passes by piles of debris on the sidewalk of Main Street in downtown as residents and try to recover from the effects of Hurricane Ida Tuesday, Aug. 31, 2021, in Houma, La. Small businesses hit by Hurricane Ida face a slow and daunting recovery as they grapple with storm damage, a lack of power, water and internet service and limited ability to communicate with clients or customers. (AP Photo/Steve Helber)

New York (AP) — Small businesses hit by Hurricane Ida face a slow and daunting recovery as they grapple with storm damage, a lack of power, water and internet service and limited ability to communicate with clients or customers.

It’s yet another blow for business owners who have been coping with the disruption caused by the coronavirus pandemic for over a year.

“Our fear is many businesses aren’t going to be able to recover, given everything else they’ve gone through for the past 18 months,” said David Chase, vice president of outreach for the advocacy group Small Business Majority.

More than 1 million homes and businesses in Louisiana and Mississippi were left without power as Ida pushed through on Sunday into early Monday. Officials said some areas could be without power for weeks.

Experts say there are several ways for businesses to begin to recover from a disaster. First and foremost is making sure all staff and their families are safe. Then consider low-interest natural disaster loans from the government and insurance claims. The process could drag on for weeks if not longer.

“It’s a big storm, slow moving, and hitting a number of states,” said Todd McCracken, president of National Small Business Association. “The higher the number of claims, the slower response is going to be.”

For Bill Rau, the owner of M.S. Rau, an antiques business which has a gallery on Royal Street in the French Quarter in New Orleans, the biggest obstacle to recovery isn’t damage to the physical location. Instead, it’s the fact that without power and water, no one can tenably live in the city. He said most of his 62 employees in New Orleans have evacuated, spread out to 11 states.

The gallery survived Ida with minor leaks. Back in 2005, the warehouse sustained several million dollars of damage from Hurricane Katrina.

Rau says his employees are “safe and sound.” He evacuated to Bentonville, Arkansas, and then New York. He was hoping to return Tuesday but is now resigned to wait until power officials give the all clear.

The U.S. is in a desperate race for lithium with China. Lithium is the key technology to transform America to clean energy. Demand for electric vehicles is driving the booming need for lithium and igniting a new energy war. China controls 80% of the global lithium supply. But new discoveries in Nevada could tip the balance to the U.S.

During Katrina, Rau dealt with as many as 14 insurance adjustors. But he hasn’t even begun to consider whether he will apply for disaster relief this time.

“It’s way too early to think about that,” he said.

While efforts to assess the damage are just underway, an early estimate from Fitch Ratings says Ida will cost insurance companies $15 billion to $25 billion. That’s well below the record $65 billion of insured losses from Hurricane Katrina in 2005. But Ida will likely surpass the winter storm dubbed Uri that hit in February as the costliest storm in 2021.

Power and internet are lifelines for small businesses, said David Lewis, CEO of HR services firm Operations Inc. Ideally, businesses had a hurricane plan in place and sent out emails ahead of time, letting customers know how to reach the company if power is lost.

Businesses that didn’t forewarn customers should attempt to reach out, by forwarding a company phone to a cell phone, for example, or using a mobile phone as a hot spot for an internet connection. While they have had some problems with their mobile networks, Verizon, AT&T and T-Mobile all said they would offer customers in affected areas free talk, text and data throughout the week.

“If you are able to have connectivity, you’re often able to provide some level of continuity for clients,” Lewis said.

Business owners also should closely review their insurance policies to know exactly what is covered. In the aftermath of Superstorm Sandy, it became apparent that some insurers covered storm damage but not wind damage, for example. Alternatively, owners might be covered for some things they didn’t realize.

Alex Contreras, director of preparedness, communication, and coordination for the U.S. Small Business Administration’s Office of Disaster Assistance, said the areas hit by Hurricane Ida were declared disaster zones, so businesses of all sizes can apply for physical disaster loans as well as working capital loans. The maximum amount is $2 million for both types of loans combined. The interest rate for business loans is about 2.9% and the money can be repaid over 30 years.

Contreras said businesses should apply for the loans as soon as they can. Those that wait could receive smaller-than-expected settlements from insurance companies and then find themselves in immediate need of cash. By then it may be too late for a loan, which takes about 16 days to process, based on past disasters.

There’s an online portal for businesses to apply and the SBA will have staff assisting the Federal Emergency Management Agency and state recovery efforts. Contreras says businesses aren’t obligated to accept a loan but could feel reassured knowing it’s available if needed.

NSBA’s McCracken also advised owners to take the largest loan they’re eligible for because the loan process takes time and other things could come up.

“Unfortunately, there’s no magic bullet, it’s a difficult situation for everyone,” McCracken said.

Chase, of the Small Business Majority, also recommends that businesses look into Community Development Financial Institutions funds. They focus on offering loans to underserved communities that big banks might reject. The loans are low interest, but also low dollar amounts.

Should you invest $1,000 in Verizon Communications right now?

Before you consider Verizon Communications, you’ll want to hear this.

MarketBeat keeps track of Wall Street’s top-rated and best performing research analysts and the stocks they recommend to their clients on a daily basis. MarketBeat has identified the five stocks that top analysts are quietly whispering to their clients to buy now before the broader market catches on… and Verizon Communications wasn’t on the list.

While Verizon Communications currently has a “Hold” rating among analysts, top-rated analysts believe these five stocks are better buys.