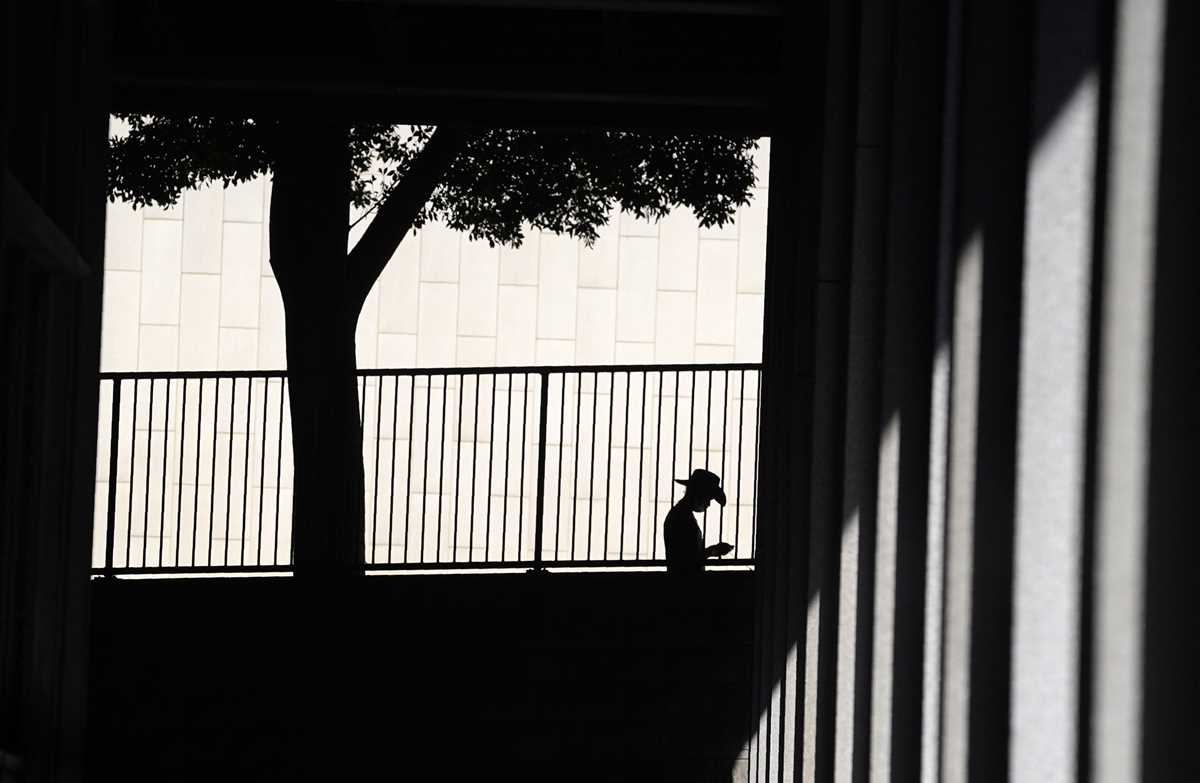 A man is silhouetted against a wall as he looks down at his cellphone outside the Clara Shortridge Foltz Criminal Justice Center, Thursday, July 29, 2021, in Los Angeles. Civil rights lawyers and Democratic senators are pushing for legislation that would limit U.S. law enforcement agencies’ ability to buy cellphone tracking tools to follow people’s whereabouts, including back years in time, and sometimes without a search warrant. (AP Photo/Chris Pizzello, File)

NEW YORK (AP) — Civil rights lawyers and Democratic senators are pushing for legislation that would limit U.S. law enforcement agencies’ ability to buy cellphone tracking tools to follow people’s whereabouts, including back years in time, and sometimes without a search warrant.

Concerns about police use of the tool known as “Fog Reveal” raised in an investigation by The Associated Press published earlier this month also surfaced in a Federal Trade Commission hearing three weeks ago. Police agencies have been using the platform to search hundreds of billions of records gathered from 250 million mobile devices, and hoover up people’s geolocation data to assemble so-called “patterns of life,” according to thousands of pages of records about the company.

Sold by Virginia-based Fog Data Science LLC, Fog Reveal has been used since at least 2018 in criminal investigations ranging from the murder of a nurse in Arkansas to tracing the movements of a potential participant in the Jan. 6 insurrection at the Capitol. The tool is rarely, if ever, mentioned in court records, something that defense attorneys say makes it harder for them to properly defend their clients in cases in which the technology was used.

“Americans are increasingly aware that their privacy is evaporating before their eyes, and the real-world implications can be devastating. Today, companies we’ve all heard of as well as companies we’re completely unaware of are collecting troves of data about where we go, what we do, and who we are,” said Sen. Ed Markey, a Massachusetts Democrat.

Panelists and members of the public who took part in the FTC hearing also raised concerns about how data generated by popular apps is used for surveillance purposes, or “in some cases, being used to infer identity and cause direct harm to people in the real world, in the physical world and being repurposed for, as was mentioned earlier, law enforcement and national security purposes,” said Stacey Gray, a senior director for U.S. programs for the Future of Privacy Forum.

The FTC declined to comment specifically about Fog Reveal.

Matthew Broderick, a Fog managing partner, told AP that local law enforcement was at the front lines of trafficking and missing persons cases, but often fell behind in technology adoption.

“We fill a gap for underfunded and understaffed departments,” he said in an email, adding that the company does not have access to people’s personal information, nor are search warrants required. The company refused to share information about how many police agencies it works with.

Fog Reveal was developed by two former high-ranking Department of Homeland Security officials under former President George W. Bush. It relies on advertising identification numbers, which Fog officials say are culled from popular cellphone apps such as Waze, Starbucks and hundreds of others that target ads based on a person’s movements and interests, according to police emails. That information is then sold to companies like Fog.

Federal oversight of companies like Fog is an evolving legal landscape. Last month, the Federal Trade Commission sued a data broker called Kochava that, like Fog, provides its clients with advertising IDs that authorities say can easily be used to find where a mobile device user lives, which violates rules the commission enforces. And a bill introduced by Sen. Ron Wyden that is now before Congress seeks to regulate the way government agencies can obtain data from data brokers and other private companies, at a time when privacy advocates worry location tracking could be put to other novel uses, such as keeping tabs on people who seek abortions in states where it is now illegal.

“It wasn’t long ago that it would take high-tech equipment or a dedicated group of agents to track a person’s movements around the clock. Now, it just takes a few thousand dollars and the willingness to get in bed with shady data brokers,” said Wyden, an Oregon Democrat. “It is an outrage that data brokers are selling detailed location data to law enforcement agencies around the country — including in states that have made personal reproductive health decisions into serious crimes.”

Because of the secrecy surrounding Fog, there are scant details about its use. Most law enforcement agencies won’t discuss it, raising concerns among privacy advocates that it violates the Fourth Amendment to the U.S. Constitution, which protects against unreasonable search and seizure.

Advocates on both sides of the aisle should be concerned about unrestricted government use of Fog Reveal, said former Virginia Republican Rep. Bob Goodlatte, who previously served as U.S. House Judiciary Chairman.

“Fog Reveal is easily de-anonymized tracking of Americans’ daily movements and location histories. Where we go can say a lot about who we are, who we associate with, and even what we believe or how we worship,” said Goodlatte, who now works as a senior policy advisor to the Project for Privacy and Surveillance Accountability. “The current political climate means that this technology could be used against people left, right and center. Everyone has a stake in curbing this technology.”

The New York Police Department used Fog Reveal at its Real Time Crime Center in 2018 and 2019, a previously undisclosed relationship confirmed by public records. A spokesperson said in an emailed statement that the NYPD used Fog on a trial basis, “strictly in the interest of developing leads for criminal investigations and lifesaving operations such as missing persons.” The department did not say if it was successful in either scenario.

“The lack of any meaningful regulation on the collection and sale of app data is both a consumer and privacy crisis,” Legal Aid Society Staff Attorney Benjamin Burger wrote in a recent post. “Both federal and state governments need to develop policies that will protect consumer data.”

This story, supported by the Pulitzer Center on Crisis Reporting, is part of an ongoing Associated Press series, “Tracked,” that investigates the power and consequences of decisions driven by algorithms on people’s everyday lives.

Solar is one of the fastest growing sectors in the stock market. And the recent clean energy bill that passed through the U.S. Congress as part of the Inflation Reduction Act is likely to keep that growth going. By some estimates, solar installation may triple over the next five years.

But the bullish outlook for this sector is about more than the funding the industry will receive. The Biden administration announced in June that it was suspending tariffs on solar panel components from four countries. This will be a key step in helping to untangle the supply chain for the necessary components.

This two-pronged strategy will be key to the sector achieving the Biden administration’s goal of having 45% of the nation’s energy supply coming from solar by 2050. That’s up from the 4% the sector supplied in 2020.

In this presentation, we’re highlighting seven solar stocks that stand to benefit as solar becomes an increasingly cost-effective option for consumers and for businesses.