Senate Majority Leader Chuck Schumer, D-N.Y., left, speaks with Senate Appropriations Committee Chair Patrick Leahy, D-Vt., and Rep. Rosa DeLauro, D-Conn., the House Appropriations Committee chair, the top Democrats in charge of the budget negotiations, as they await Ukrainian President Volodymyr Zelenskyy to address Congress, at the Capitol in Washington, Wednesday, Dec. 21, 2022. Lawmakers are rushing to complete passage of a spending bill to fund the government before a midnight Friday deadline or face the prospect of a partial government shutdown going into the Christmas holiday. (AP Photo/J. Scott Applewhite) 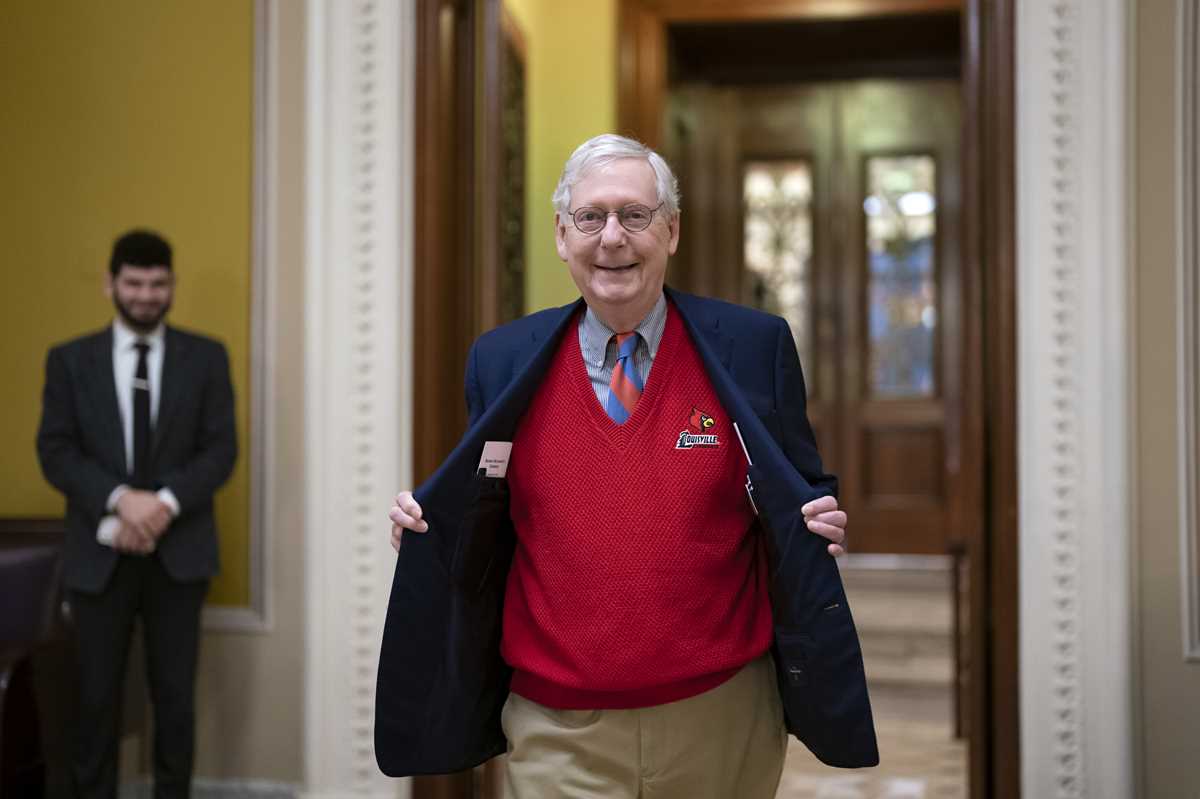 Senate Minority Leader Mitch McConnell, R-Ky., the top Republican, shows off his red University of Louisville sweater as he exits the chamber at the Capitol in Washington, early Thursday morning, Dec. 22, 2022. Lawmakers are rushing to complete passage of a spending bill to fund the government before a midnight Friday deadline or face the prospect of a partial government shutdown going into the Christmas holiday. (AP Photo/J. Scott Applewhite)

Senate Majority Leader Chuck Schumer, D-N.Y., walks to the chamber after speaking with Sen. Chris Coons, D-Del., right, as lawmakers rush to complete passage of a $1.7 trillion bill to fund the government before a midnight Friday deadline or face the prospect of a partial government shutdown going into the Christmas holiday, at the Capitol in Washington, Wednesday, Dec. 21, 2022. (AP Photo/J. Scott Applewhite) 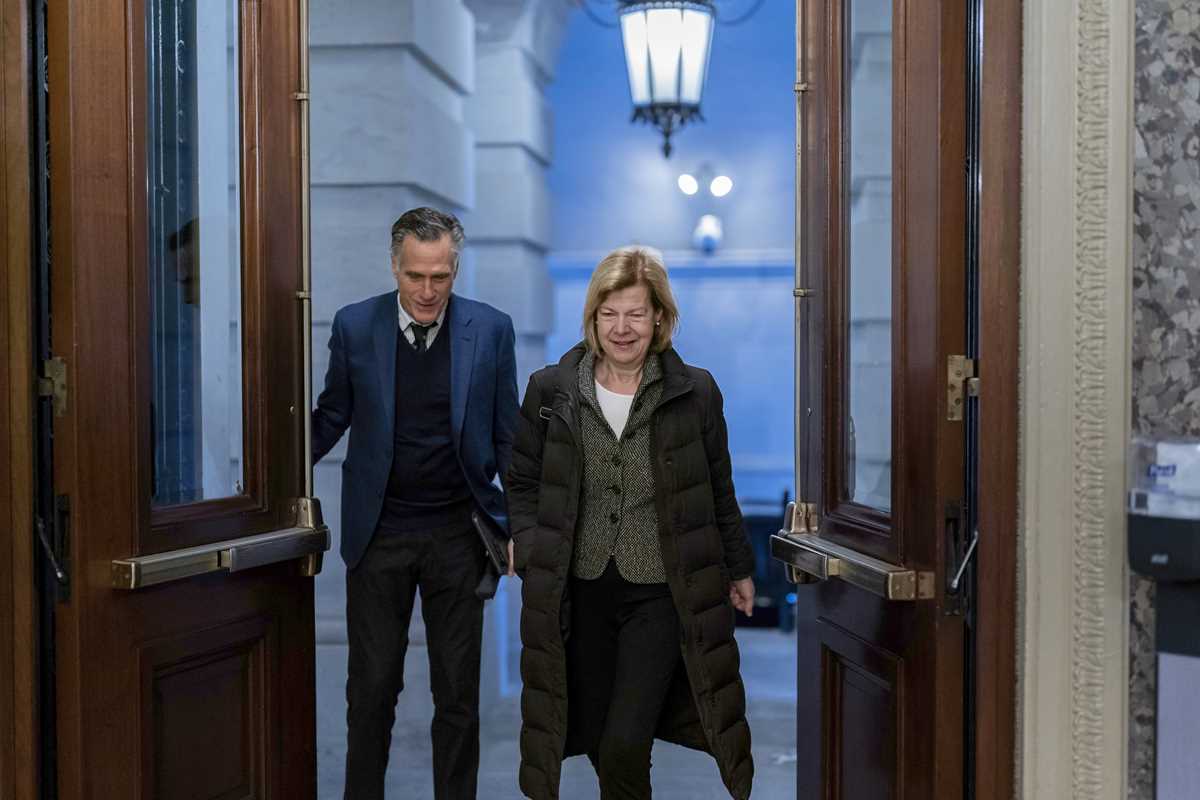 Sen. Mitt Romney, R-Utah, left, and Sen. Tammy Baldwin, D-Wisc., arrive as lawmakers rush to complete passage of a spending bill to fund the government before a midnight Friday deadline or face the prospect of a partial government shutdown going into the Christmas holiday, at the Capitol in Washington, Thursday, Dec. 22, 2022. (AP Photo/J. Scott Applewhite) 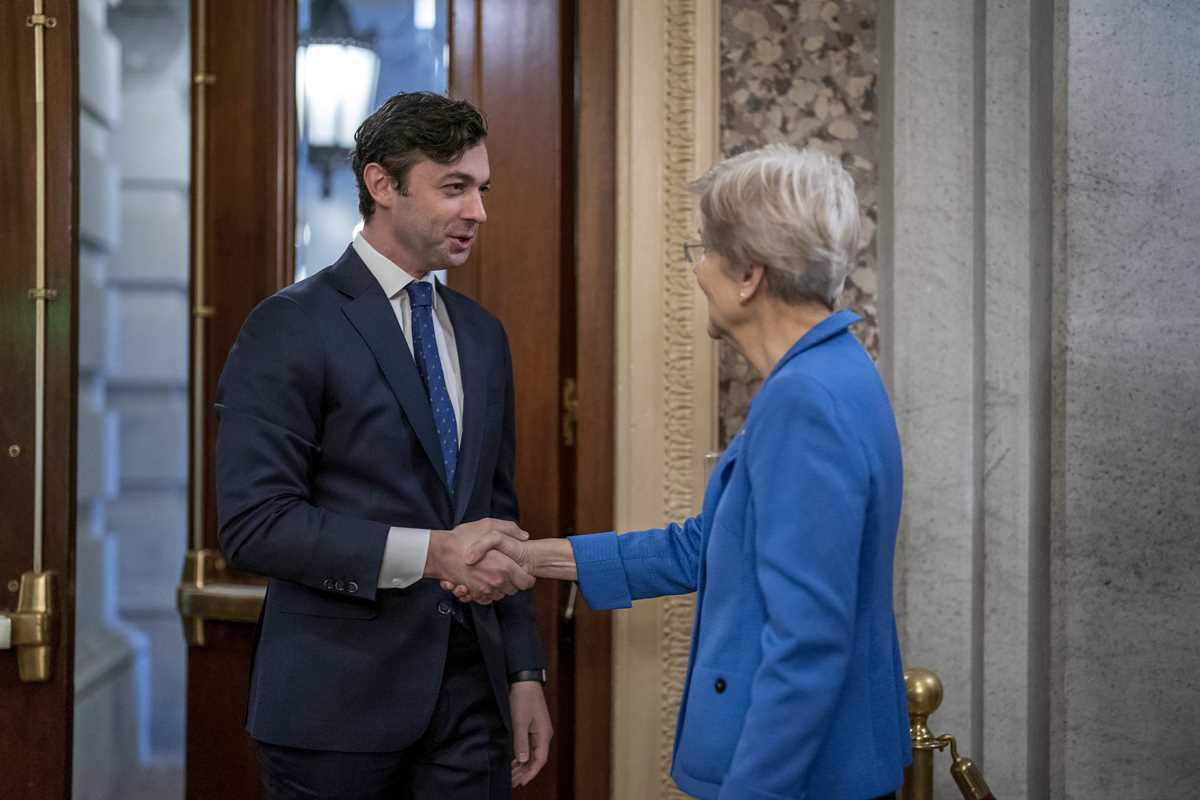 Sen. Jon Ossoff, D-Ga., left, is greeted by Sen. Elizabeth Warren, D-Mass., as lawmakers arrive to complete passage of a spending bill to fund the government before a midnight Friday deadline or face the prospect of a partial government shutdown going into the Christmas holiday, at the Capitol in Washington, Thursday, Dec. 22, 2022. (AP Photo/J. Scott Applewhite) 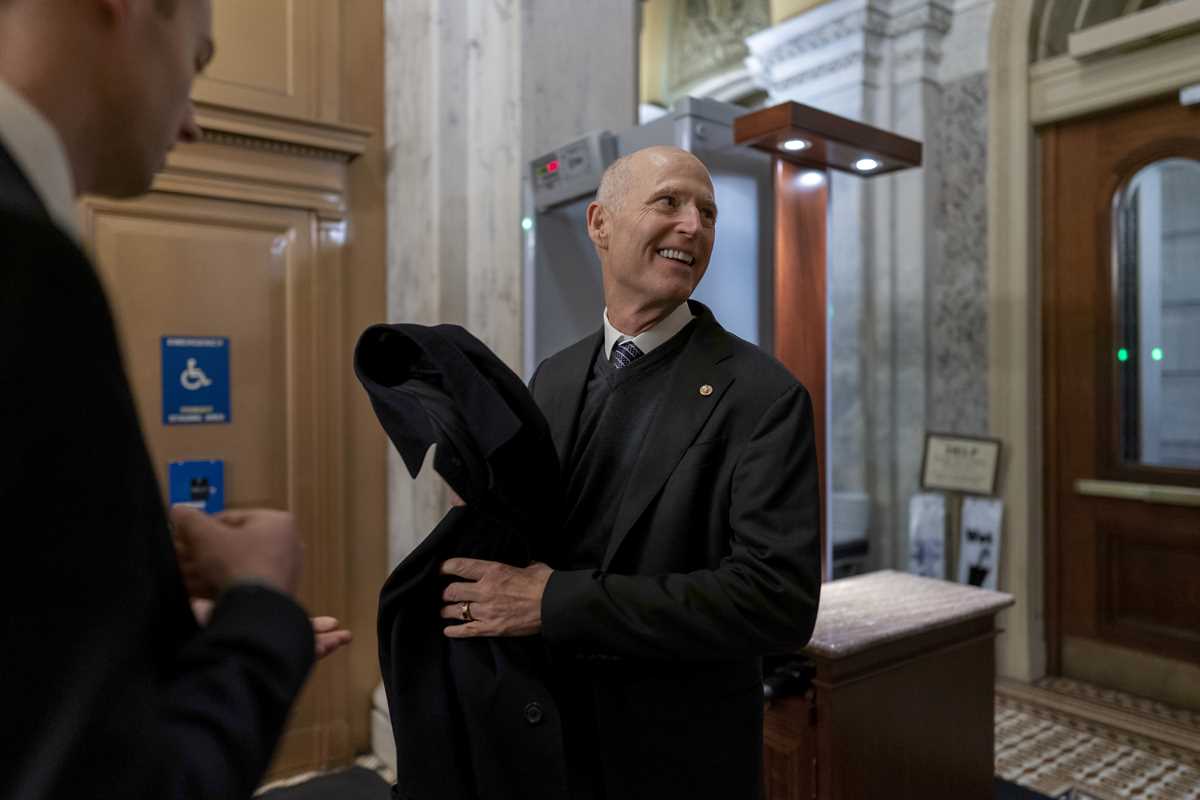 Sen. Rick Scott, R-Fla., arrives as lawmakers rush to complete passage of a spending bill to fund the government before a midnight Friday deadline or face the prospect of a partial government shutdown going into the Christmas holiday, at the Capitol in Washington, Thursday, Dec. 22, 2022. (AP Photo/J. Scott Applewhite) 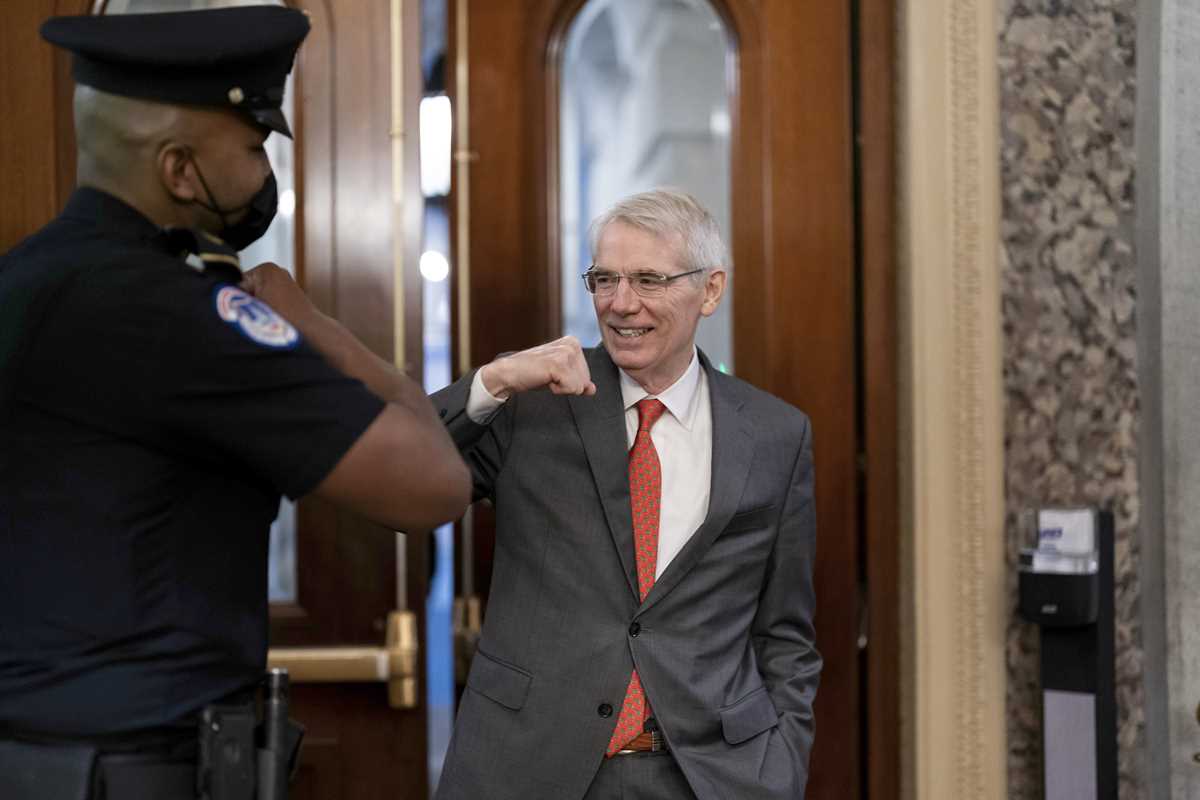 Sen. Rob Portman, R-Ohio, is greeted by a U.S. Capitol Police officer as lawmakers rush to complete passage of a spending bill to fund the government before a midnight Friday deadline or face the prospect of a partial government shutdown going into the Christmas holiday, at the Capitol in Washington, Thursday, Dec. 22, 2022. Portman is retiring from the Senate at the end of the term. (AP Photo/J. Scott Applewhite) 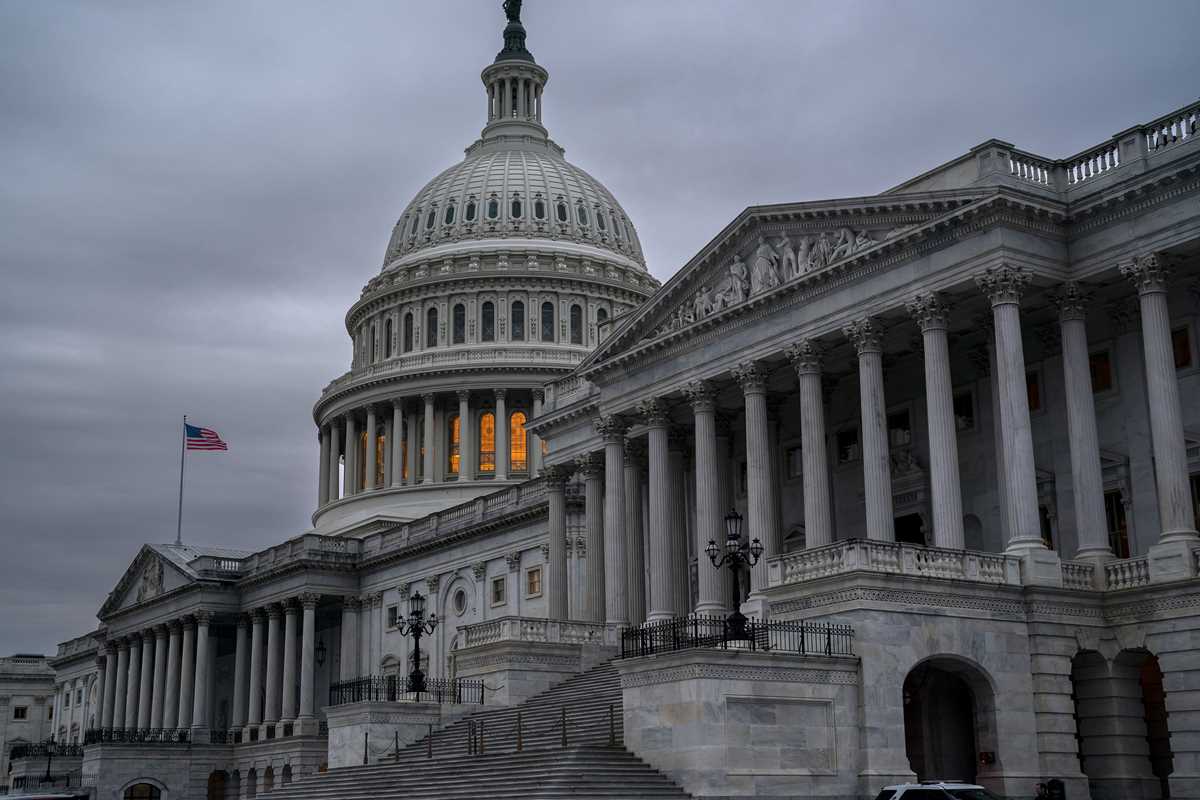 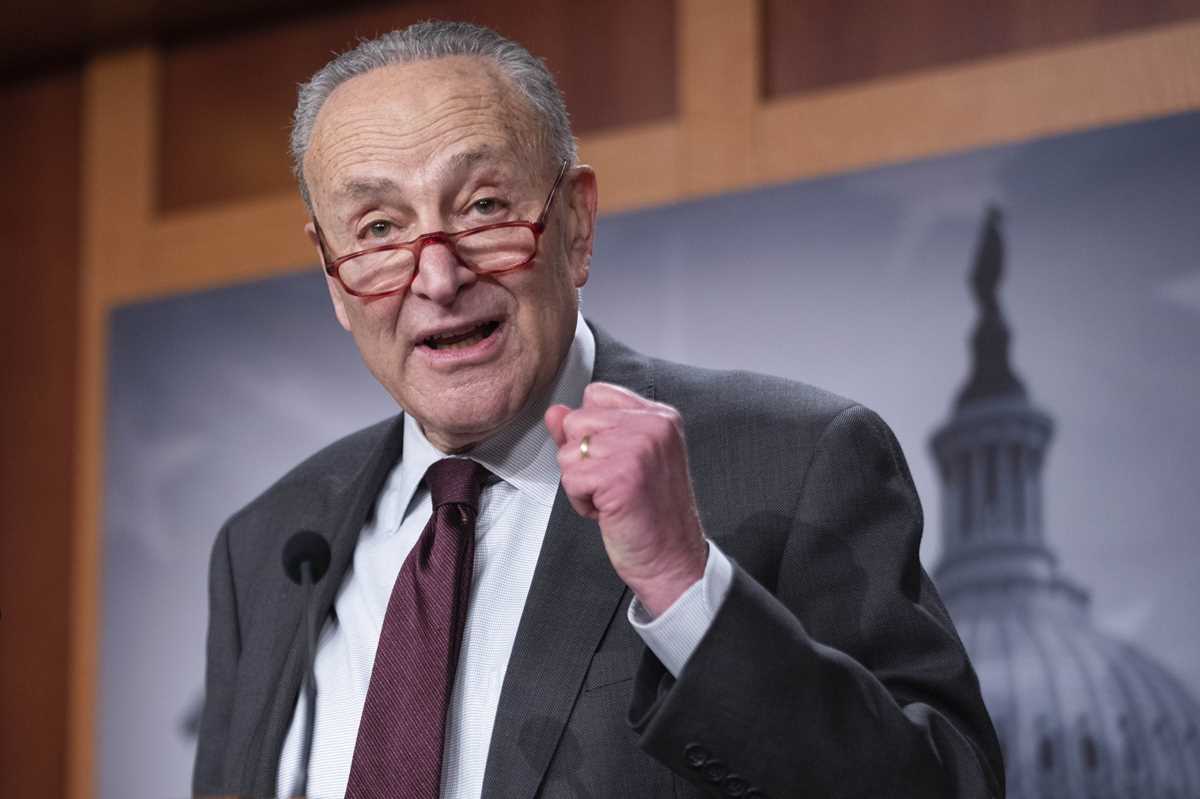 Senate Majority Leader Chuck Schumer of N.Y., speaks during a news conference, Thursday, Dec. 22, 2022, after the passing of the omnibus on Capitol Hill in Washington. (AP Photo/Jacquelyn Martin)

WASHINGTON (AP) — The Senate passed a massive $1.7 trillion spending bill Thursday that finances federal agencies through September and provides another significant round of military and economic aid to Ukraine one day after Ukrainian President Volodymyr Zelenskyy’s dramatic address to a joint meeting of Congress.

The bill, which runs for 4,155 pages, includes about $772.5 billion for domestic programs and $858 billion for defense and would finance federal agencies through the fiscal year at the end of September.

The bill passed by a vote of 68-29 and now goes to the House for a final vote before it can be sent to President Joe Biden to be signed into law.

“This is one of the most significant appropriations packages we have done in a very long time,” said Senate Majority Leader Chuck Schumer, D-N.Y. “The range of people it helps is large and deep.”

Lawmakers were racing to get the bill approved before a partial government shutdown would occur at midnight Friday, and many were anxious to complete the task before a deep freeze and wintry conditions left them stranded in Washington for the holidays. Many also want to lock in government funding before a new GOP-controlled House next year could make it harder to find compromise on spending.

Senators heard from Zelenskyy about the importance of U.S. aid to his country for its war with Russia on Wednesday night. The measure provides about $45 billion in military, economic and humanitarian assistance for the devastated nation and NATO allies, more than Biden even requested, raising total assistance so far to more than $100 billion.

“Your money is not charity,” Zelenskyy told lawmakers and Americans watching from home. “It’s an investment in the global security and democracy that we handle in the most responsible way.”

Lawmakers were in disagreement over which amendments were to be voted upon to lock in a final vote on an expedited basis. The impasses had the potential to prevent passage of the bill before the midnight Friday deadline. But negotiations overnight led to a breakthrough and senators gathered early Thursday morning to work through more than a dozen amendments before getting to a final vote.

The House won’t be able to take up the bill until Friday morning, and while it is expected to pass, House Majority Leader Steny Hoyer, D-Md., said the chamber will also approve a stopgap spending resolution to ensure government services continue without interruption before the bill is signed into law.

The spending bill was supported by Schumer and Senate Republican leader Mitch McConnell, though for different reasons.

McConnell cited the bill’s nearly 10% boost in defense spending, which he says will give America’s Armed Forces the funding and certainty needed to ensure the country’s security.

“The world’s greatest military will get the funding increase that it needs, outpacing inflation,” McConnell said. “Meanwhile, non-defense, non-veterans spending will come in below the rate of inflation, for a real-dollar cut.”

McConnell faced pushback from many Republicans who don’t support the spending bill and resent being forced to vote on such a massive package with so little time before a potential shutdown and the Christmas holiday.

“There has not been enough time for a single person to have read this entire bill. The bill and process ignores soaring inflation, rising interest rates and our ballooning debt of $31 trillion,” said Sen. Rand Paul, R-Ky. “Enough is enough.”

Eighteen Republican senators joined with Democrats in voting for the bill.

For two senators, the bill puts the finishing touches on their work in Washington. Sen. Patrick Leahy, D-Vt., is retiring after serving some 48 years in the Senate and as the current chairman of the Senate Appropriations Committee. He negotiated the bill for months with Sen. Richard Shelby of Alabama, the committee’s ranking Republican, who was elected to the Senate in 1986 and is also retiring.

“What a capstone to a brilliant career,” Schumer said.

The bill also contains roughly $40 billion in emergency spending in the U.S., mostly to assist communities across the country recovering from drought, hurricanes and other natural disasters.

And, of course, it includes scores of policy changes unrelated to spending that lawmakers sought to include in what is going to be the last major bill of the Congress, else they start from scratch next year in a divided Congress where Republicans will be returning to the majority in the House.

One of the most notable examples was a historic revision to federal election law that aims to prevent any future presidents or presidential candidates from trying to overturn an election. The bipartisan overhaul of the Electoral Count Act is in direct response to former President Donald Trump’s efforts to convince Republican lawmakers and then-Vice President Mike Pence to object to the certification of Biden’s victory on Jan. 6, 2021.

The bill also allowed Congress to follow through on some of the most consequential bills it had passed over the past two years, such as a measure aiming to boost computer chip production in the U.S. and another to expand health care services to veterans exposed to toxic burn pits. Some $5 billion was provided help the VA implement some of the changes called for in the PACT Act, and the amount of money provided specifically for VA health care soared 22% to nearly $119 billion.

“These benefits are deserved,” Leahy said. “They were earned, and they are owed.”