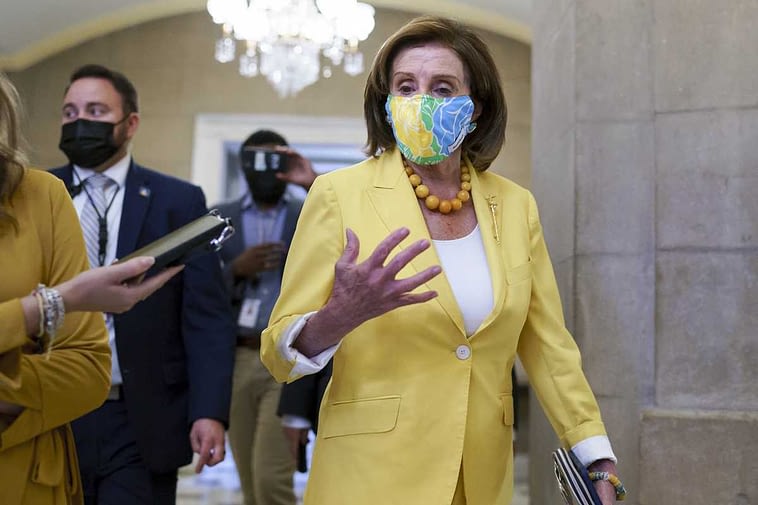 Speaker of the House Nancy Pelosi, D-Calif., leaves the chamber after urging advancement of the John Lewis Voting Rights Advancement Act, named for the late Georgia congressman who made the issue a defining one of his career, at the Capitol in Washington, Tuesday, Aug. 24, 2021. (AP Photo/J. Scott Applewhite) 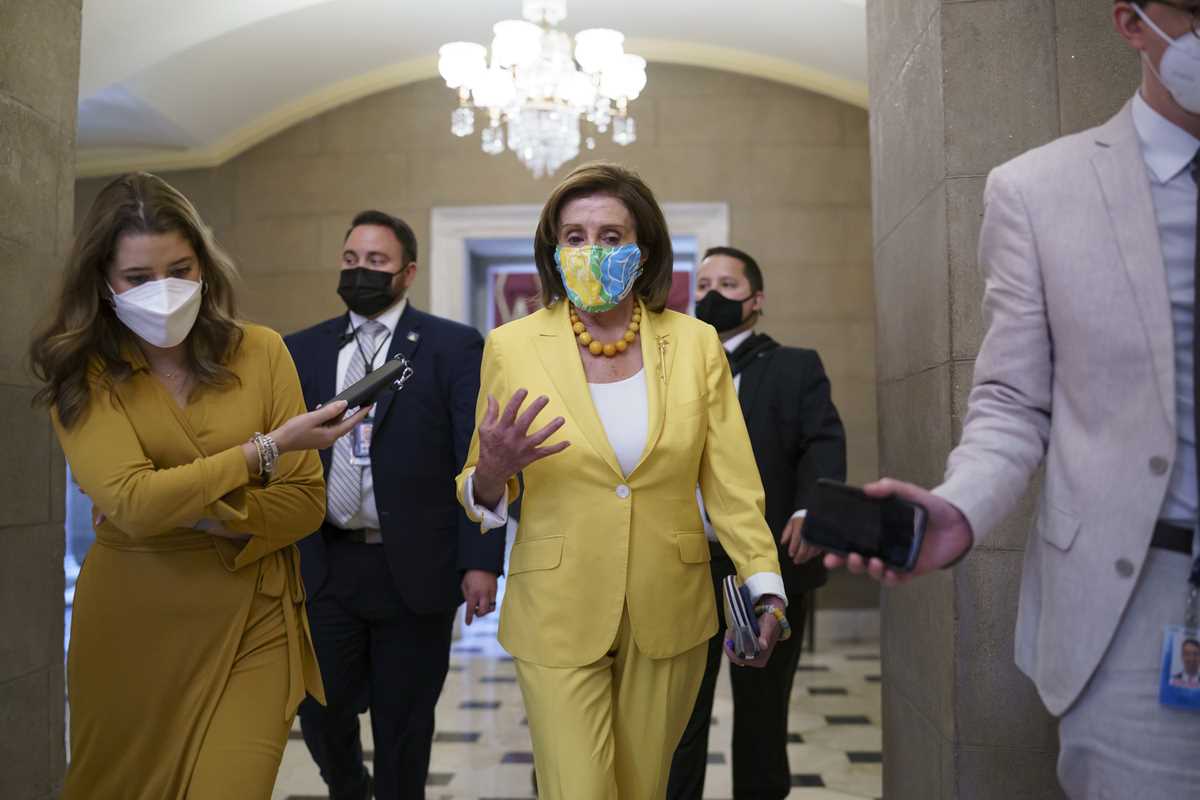 Speaker of the House Nancy Pelosi, D-Calif., leaves the chamber after urging advancement of the John Lewis Voting Rights Advancement Act, named for the late Georgia congressman who made the issue a defining one of his career, at the Capitol in Washington, Tuesday, Aug. 24, 2021. (AP Photo/J. Scott Applewhite)

WASHINGTON (AP) — Striking a deal with moderates, House Democratic leaders are set Tuesday to muscle President Joe Biden’s multitrillion-dollar budget blueprint over a key hurdle, in a compromise designed to end a risky standoff and put the party’s domestic infrastructure agenda back on track.

An afternoon vote was scheduled after a turbulent 24 hours that brought the House to a standstill. Tensions flared as a band of moderate lawmakers threatened to withhold their votes for the $3.5 trillion plan. They were demanding the House first approve a nearly $1 trillion bipartisan package of other public works projects that’s already passed the Senate.

In brokering the compromise, House Speaker Nancy Pelosi committed to voting on the bipartisan package no later than Sept. 27. That’s an attempt to assure lawmakers it won’t be left on the sidelines, but it is in line with Pelosi’s insistence that the two bills move together as a more complete collection of Biden’s priorities. Pelosi has set a goal of passing both by Oct. 1.

“We’re close to landing the plane,” Pelosi told lawmakers Tuesday, according to a Democratic aide granted anonymity to discuss a closed-door caucus meeting.

Easing off the stalemate will shelve, for now, the stark divisions between moderate and progressive lawmakers who make up the Democrats’ so-slim House majority. But as the drama spilled out, it showcased the power even a handful of voices can have in setting the agenda and signaled the battles ahead.

What was supposed to be a quick session as lawmakers returned to work for a few days in August devolved into a display of the party differences that threaten to upend Biden’s ambitious rebuilding agenda.

With Republicans fully opposed to the president’s big plans, the Democratic leaders have just a few votes to spare. That gives any band of lawmakers leverage that can be used to make or break a deal, as they are poised to do in the weeks to come as moderates and progressives draft and vote on the broader $3.5 trillion package.

The Coca-Cola Company acquired Vitamin Water from Glacéau for $4.1 billion

“I think it’s important to those of us who are moderate Democrats to make sure that our voices are heard,” said Rep. Jim Costa, D-Calif., one of the negotiators.

Challenging their party’s most powerful leaders, nine moderate Democrats signed onto a letter late last week raising their objections to pushing ahead with Biden’s broader infrastructure proposal without first considering the smaller public works plan that has already passed the Senate.

Their ranks grew as other moderates raised similar concerns.

Progressives were outraged at the moderates, blaming them for potentially jamming Biden’s agenda, which is stocked with hard-fought party goals like child care, paid family leave and a Medicare expansion.

Outside groups, including Justice Democrats, started running campaign ads and members of Our Revolution, the organization aligned with Bernie Sanders, protested Tuesday outside the New Jersey office of Rep. Josh Gottheimer, a leader of the moderate effort.

“This is a ‘which side are you on‘ moment,'” said Our Revolution executive director Joseph Geevarghese, who promised to “organize like never before to hold Democrats accountable and get this bill over the finish line.”

The budget measure is at the heart of Biden’s “Build Back Better” vision for helping families and combating climate change and is progressives’ top priority, all of it largely financed with tax increases on the rich and big business.

The House committees are already fast at work drafting legislation to fill in the details of the $3.5 trillion package for consideration later this fall.

Progressives signaled early on they wanted the Biden budget priorities first before they agree to the smaller Senate package, worried it would be an insufficient down-payment on his goals.

But the moderates want the opposite, insisting Congress quickly send the smaller, bipartisan infrastructure measure they helped shape with the senators to Biden so he can sign it before the political winds shift.

In fact, the moderates were also trying to win assurances from Pelosi that whatever version of the broader bill they draft in the House will be the same in the Senate — setting up another showdown between the party’s competing flanks and their vision for the rebuilding priorities.

So far, the White House has backed Pelosi as she has led her party in a tightly scripted strategy.

Republicans plan to reject the the $3.5 trillion effort as big government spending, and GOP support for the slimmer $1 trillion bipartisan measure is now uncertain.

The conservative House Freedom Caucus said it opposes both the Biden budget and the bipartisan bill.

Republicans blasted Democrats for pursuing their priorities at a time when they said all focus should be on Afghanistan, as thousands of people including Americans are trying to flee the country as the U.S. withdraws its forces.

“We should be doing nothing else on this floor until every single American is home,” said Rep. Kevin McCarthy, the House minority leader.

Inserting his own wedge into the politics of the situation, Senate Republican leader Mitch McConnell said Tuesday on Fox News that he was rooting for the House moderates.

“I wish the moderates in the House success,” McConnell said. “I’m pulling for them.”

7 Stocks That Can Help You Profit From Summer Shortages

One of the lingering impacts of the Covid-19 pandemic is the supply chain disruptions that continue to bedevil many sectors. By now, every investor is aware of the global chip shortage that is disrupting many sectors that were projected to have strong growth in 2021.

But there are many more sectors that are being affected by supply chain disruptions. And this affects everything from big-ticket items like cars to everyday items like pet food and even bacon.

The focus of this special presentation is seven companies that stand to benefit from the current disruption in the supply chain. All of these companies delivered strong gains in 2020. Some of them have weakened in 2021, but that was before the full extent of the supply chain weakness was discovered.

As the economy reopens, the shortage of items is likely to continue and become much more notable. When they do, many of these stocks may get overpriced. That’s why now is the time to get in on these stocks that can help you work the supply chain in your favor.

View the “7 Stocks That Can Help You Profit From Summer Shortages”.