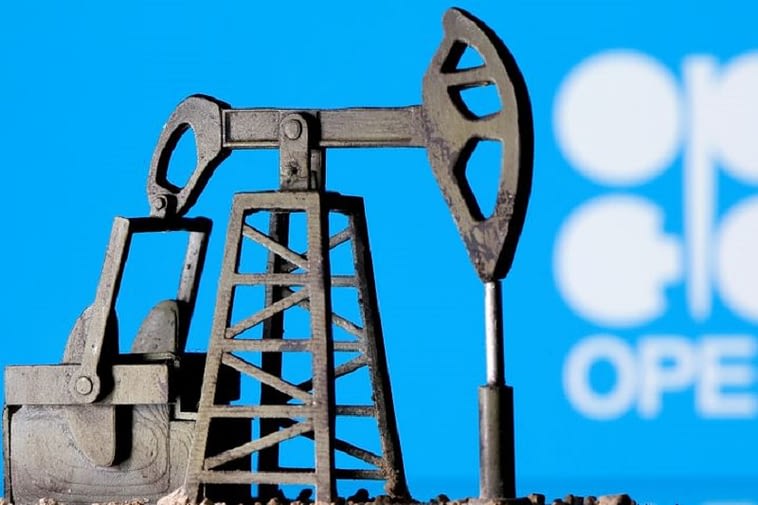 © Reuters. FILE PHOTO: A gas pump is seen hanging from the ceiling at a petrol station in Seoul June 27, 2011. REUTERS/Jo Yong-Hak

TOKYO (Reuters) – Oil prices fell on Thursday after OPEC+ agreed to keep its policy of gradually returning supply to the market at a time when coronavirus cases around the world are surging and many U.S. refiners, a key source of crude demand, remained offline.

The Organization of the Petroleum Exporting Countries (OPEC) and other producers including Russia, together known as OPEC+, agreed on Wednesday to continue a policy of phasing out record production reductions by adding 400,000 barrels per day (bpd) each month to the market.

However, OPEC+ raised its demand forecast for 2022 while also facing U.S. pressure to accelerate production increases.

“What is not so certain … is whether demand will be able to grow as quickly as OPEC+ and the market predicts, given the risk of new lockdowns to fight the unresolved Covid-mutant spread,” Rystad Energy’s head of oil markets, Bjornar Tonhaugen, said in a note.

In the U.S., oil refineries in Louisiana may take weeks to restart after Hurricane Ida swept through the region, with operators facing power and water shortages, which is likely to crimp demand for oil.

Energy companies were scrambling to restart platforms and pipelines in the Gulf, with about 1.4 million bpd of oil production still offline, the U.S. offshore regulator said.

inventories dropped by 7.2 million barrels and petroleum products supplied by refiners rose to a record despite the increase in coronavirus infections across the country, the Energy Information Administration said on Wednesday. [EIA/S]