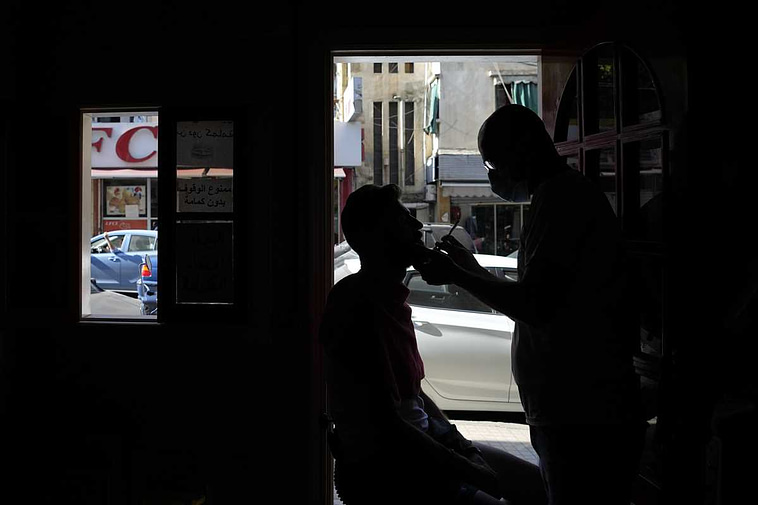 A Lebanese barber shaves the beard of a customer at the door of his shop during a power outage in a southern suburb of Beirut, Lebanon, Wednesday, Aug. 11, 2021. Lebanon, which is mired in multiple crises including a devastating economic crisis, has faced months of severe fuel shortages that have prompted long lines at gas stations and plunged the small country, dependent on private generators for power, into long hours of darkness. (AP Photo/Hassan Ammar)

BEIRUT (AP) — Severe fuel shortages and wide power cuts have paralyzed tiny Lebanon, with some businesses temporarily closing down on Friday as top security officials met to discuss the situation.

Lebanon has for decades suffered electricity cuts, partly because of widespread corruption and mismanagement. The Mediterranean nation of 6 million, including 1 million Syrian refugees is near bankruptcy.

The situation deteriorated dramatically this week after the central bank decided to end subsidies for fuel products. The decision will likely lead to a hike in prices of almost all commodities in Lebanon.

The move by the central bank was rejected by both Lebanon’s president and outgoing prime minister who claimed they were not notified in advance.

Major roads were jammed Friday as thousands of cars waited in long lines at petrol stations. People rushed to bakeries to by bread amid fears some might close down.

“Many bakeries that are running out (of diesel) will close tomorrow,” Ali Ibrahim, head of the bakers’ union, told state-run National News Agency.

Fuel shortages have been blamed on smuggling, hoarding and the cash-strapped government’s inability to secure deliveries of imported fuel.

The situation has been made worse by the failure of political leaders to agree on a new government to chart a path out of the crisis and negotiate a recovery package with the International Monetary Fund.

Earlier this week, Energy Minister Raymond Ghajar said Lebanon needs about 3,000 megawatts of electricity but produces about 750 megawatts. The gap has been filled for decades by thousands of private generator owners who also had to cut supplies amid severe diesel shortages.

Big Pharma doesn’t want to CURE depression. The longer we stay depressed, the more money they make. But one new company is changing all that.

People currently get an average of two hours of electricity a day from the notoriously corrupt state company that has cost state coffers more than $40 billion over the past three decades.

Among those to announce a temporarily closure was City Mall, one of the largest in Lebanon. Some hospitals have warned they will be forced to close if they are not supplied with diesel.