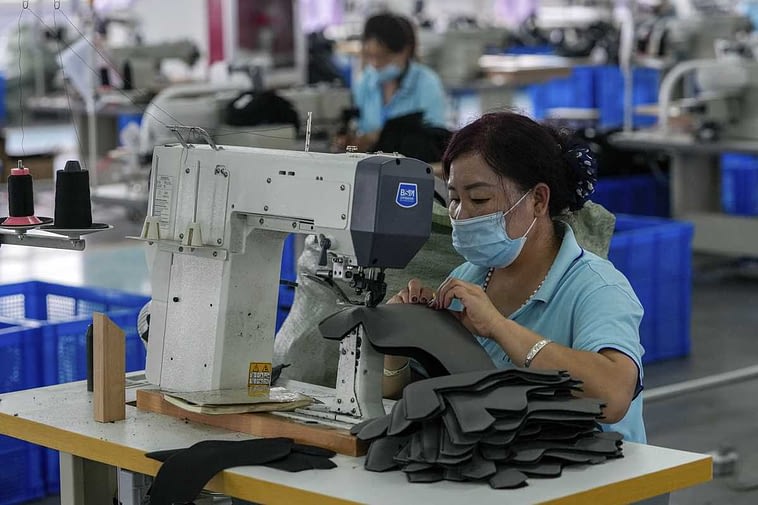 Workers wearing face masks to help curb the spread of the coronavirus sew layers for ice-skating shoes at a manufacturing factory in the ice and snow sports equipment industry park in Zhangjiakou in northwestern China’s Hebei province on July 15, 2021. China’s retail sales and industrial production growth weakened in July as floods and COVID-19 outbreaks in parts of China disrupted the consumption and supply chain, a government spokesperson said on Monday, Aug. 16, 2021. (AP Photo/Andy Wong) 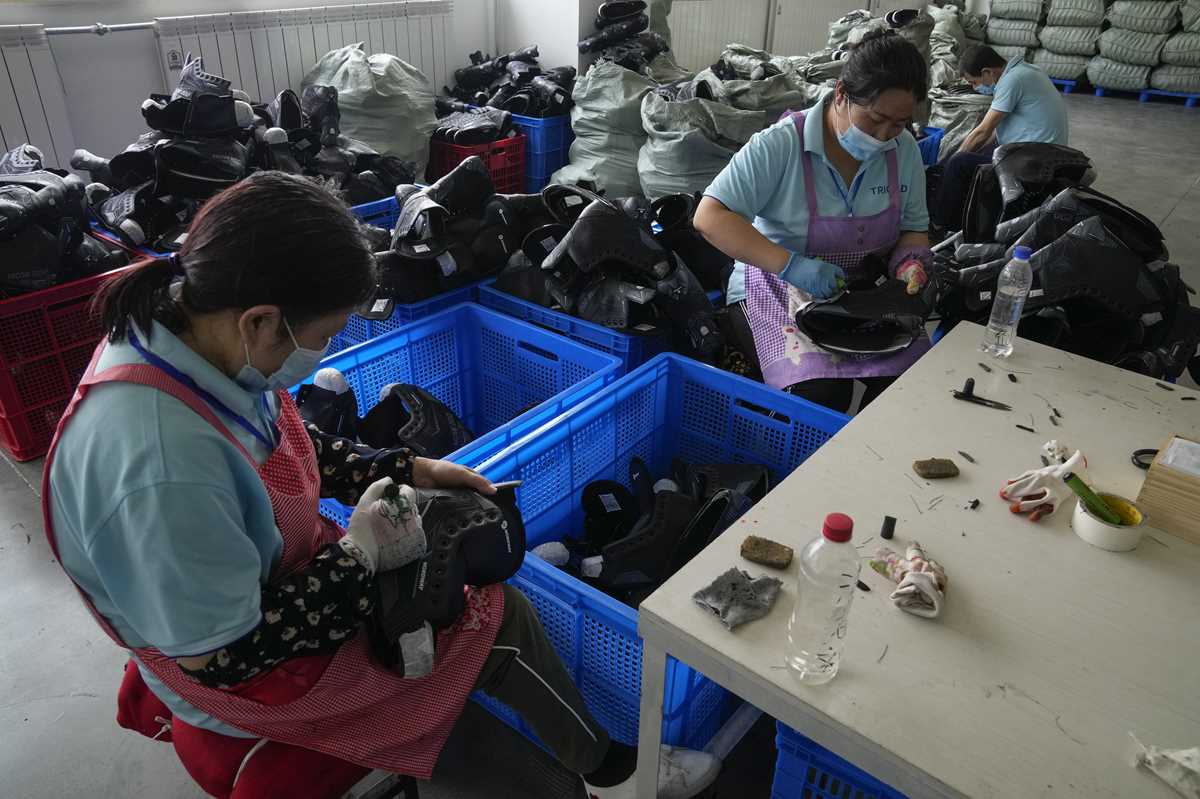 Workers wearing face masks to help curb the spread of the coronavirus assembly ice-skating shoes at a manufacturing factory in the ice and snow sports equipment industry park in Zhangjiakou in northwestern China’s Hebei province on July 15, 2021. China’s retail sales and industrial production growth weakened in July as floods and COVID-19 outbreaks in parts of China disrupted the consumption and supply chain, a government spokesperson said on Monday, Aug. 16, 2021. (AP Photo/Andy Wong) 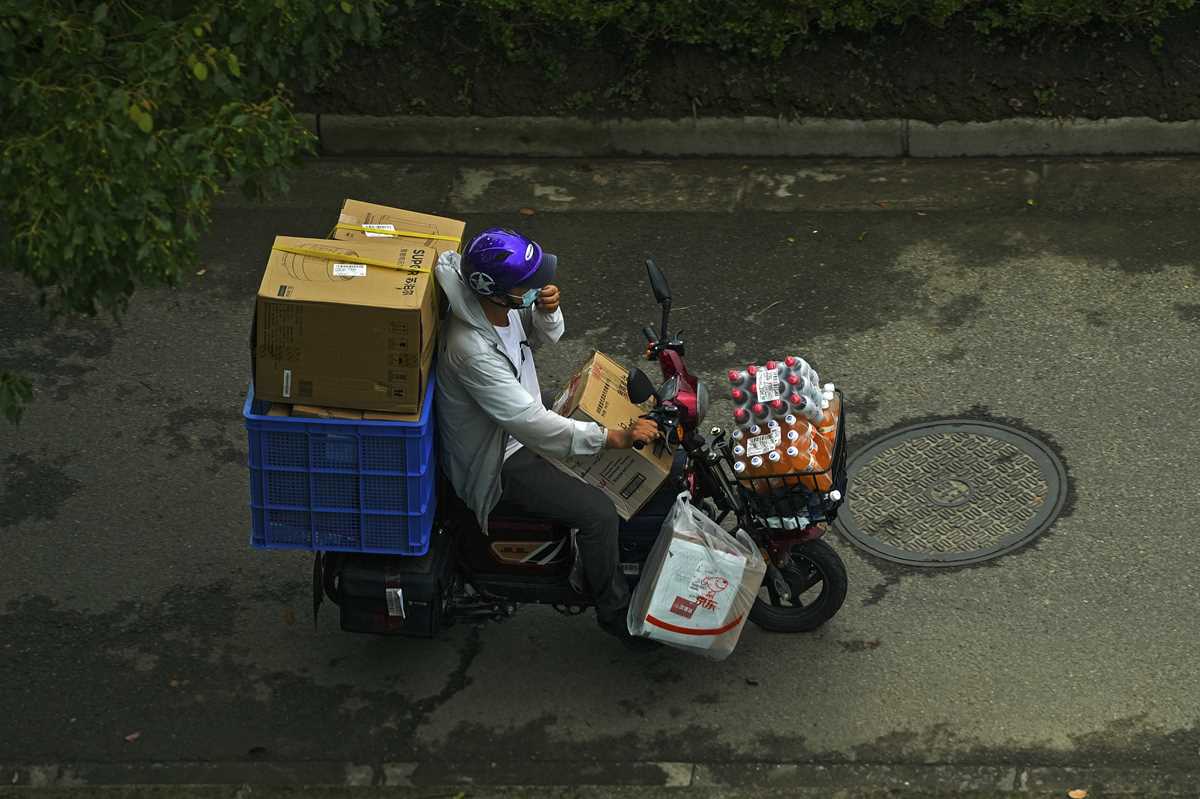 A delivery worker adjusts his face mask to help curb the spread of the coronavirus rides on an electric-powered scooter loaded with parcels and beverages on a street in Shanghai, China, Monday, Aug. 16, 2021. China’s retail sales and industrial production growth weakened in July as floods and COVID-19 outbreaks in parts of China disrupted the consumption and supply chain, a government spokesperson said on Monday. (AP Photo/Andy Wong)

BEIJING (AP) — China’s economic growth will soften this year due to summer flooding and anti-coronavirus controls, an official said Monday, after consumer sales and other activity weakened in July.

China’s economy still is in a “recovery trend” from last year’s pandemic-induced slowdown but is likely to weaken after a relatively strong first half, said Fu Linghui, a spokesman for the National Bureau of Statistics.

“This year’s main economic growth trend will be ‘low after high,‘” Fu said at a news conference.

The economy was disrupted by unusually severe summer flooding that hit central China in July, killing more than 300 people in Henan province. More floods hit Hubei province to the south this month, killing at least 21 people.

Meanwhile, authorities have reimposed some travel and business controls to fight outbreaks of the coronavirus’s more contagious delta variant that began in late July. Some airline flights and train service have been canceled, most access to a city of 1.5 million cut off and mass virus testing ordered in some areas.

“Given China’s ‘zero tolerance’ approach to Covid, future outbreaks will continue to pose significant risk to the outlook,” said Kuijs.

The government reported earlier that economic growth slowed to a still-strong 7.9% over a year earlier in the three months ending in June, down from the previous quarter’s 18.3%. Those figures were amplified by comparison with early 2020, when the economy was shut down to fight the virus.

Output in the second quarter compared with the January-March period, the way other major economies are measured, was 1.3%, up from the previous quarter’s 0.6% over late 2020.

“The economy will still maintain a stable recovery,” Fu said. “The quality of development will continue to improve.”

For the better part of the last year, Congress has had “big tech” in its crosshairs. But the reasons why largely depend on what side of the aisle a particular individual was on.

But big tech scored an important, albeit not final, victory in late June. At that time, a U.S. judge dismissed two separate complaints against Facebook (NASDAQ:FB). The question in front of the judge was whether Facebook held a monopoly on social media. Due to a surge in the company’s stock price after the ruling, Facebook became a member of the exclusive $1 trillion market cap club.
While big tech companies will remain under the Congressional microscope, there’s no denying that investors are looking at the ruling as a signal to rotate back into tech stocks. And that’s the focus of this presentation. What tech stocks should you be buying as anti-trust pressure eases?

It would be easy to start and end the list with the FAANG stocks. After all, the motto “Keep it Simple Stupid” comes to mind. There are simply those companies that offer products that are changing our lives now and will continue to do so in the future. And furthermore, customers will continue to pay for their products.

And I do have a couple of these stocks on my list. But the bulk of the stocks on this list are less expensive alternatives to at least one of the FAANG stocks. It doesn’t mean they’re superior companies, but a rising tide tends to lift all boats. And that means these companies have a large upside and you can purchase the stocks for a lot less.

View the “7 Tech Stocks That Are Heating Up as Anti-Trust Talk Cools Down”.