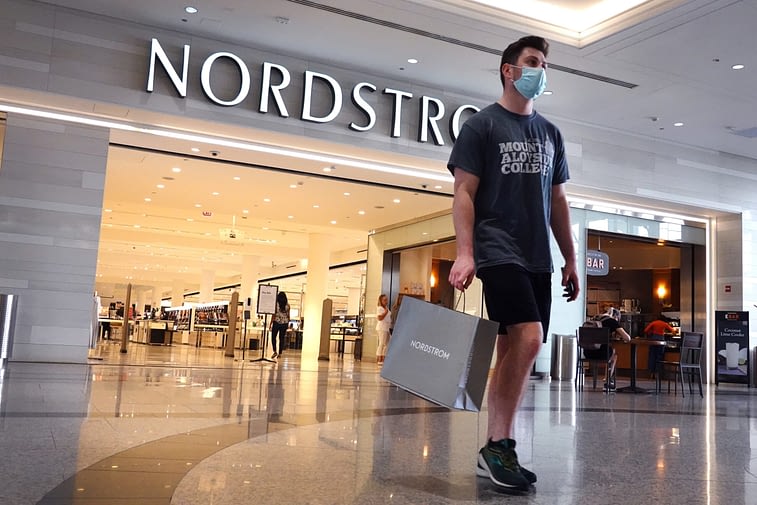 A shopper leaves a Nordstrom store on May 26, 2021 in Chicago, Illinois.

Compared with a year earlier, sales more than doubled, as shoppers used Nordstrom’s anniversary sale as a reason to head back to the mall and splurge on new shoes, dresses and activewear. But on a two-year basis, revenue was down 6%.

Nordstrom was feeling more optimistic about the rest of the year, and raised its outlook, following rivals Macy’s and Kohl’s that did the same in recent days.

But its shares were down more than 6% in extended trading.

Here’s how Nordstrom did for the quarter ended July 31 compared with what Wall Street was expecting, based on a survey of analysts by Refinitiv:

Total sales from Nordstrom’s anniversary sale event were up 1% compared with 2019, the company said. Last year’s event was pushed into the third quarter due to the circumstances of the Covid pandemic.

“A compelling merchandise assortment, combined with new and differentiated services and experiences, contributed to strengthening customer engagement and improving financial results during our Anniversary Sale,” said President Pete Nordstrom in a press release.

At Nordstrom’s namesake department store brand, revenue was up 127% compared with a year earlier, but down 5% on a two-year basis.

The company said its online sales rose 30% from a year earlier, representing 40% of Nordstrom’s total business.

Nordstrom now expects its annual revenue to rise more than 35%, up from a prior outlook calling for 25% growth. Analysts had been looking for a 30% increase, according to Refinitiv.

As of Tuesday’s marker close, Nordstrom shares are up 21% year to date, bringing the retailer’s market cap to $6 billion.