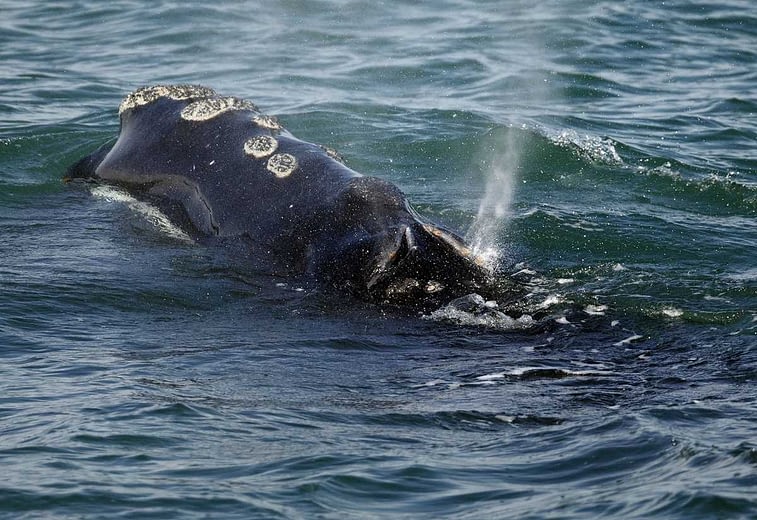 In this March 28, 2018, file photo, a North Atlantic right whale feeds on the surface of Cape Cod bay off the coast of Plymouth, Mass. America’s lobster fishing industry will face a host of new restrictions in harvesting the valuable crustaceans due to a new push from the federal government to try to save a vanishing species of whale. The whales number only about 360 and they are vulnerable to lethal entanglement in fishing gear. (AP Photo/Michael Dwyer, File)

PORTLAND, Maine (AP) — America’s lobster fishing industry will face a host of new harvesting restrictions amid a new push from the federal government to try to save a vanishing species of whale.

The new rules, which have loomed over the profitable lobster industry for years and were announced Tuesday by the National Oceanic and Atmospheric Administration, are designed to protect the North Atlantic right whale. The whales number only about 360 and are vulnerable to lethal entanglement in fishing gear.

NOAA said it expects the new rules will result in a reduction in nearly 70% of the risk of death and serious injuries the whales can suffer from entanglement. The rules had long been expected to focus on reducing the number of vertical ropes in the water, and they will.

The rules reduce the number of rope lines that link buoys to lobster and crab traps, NOAA said. The rules will also require the use of weaker ropes so whales can more easily break free if they do become entangled, the agency said. NOAA said the rules also expand the areas of ocean where fishing with trap rope is prohibited or limited.

“The new measures in this rule will allow the lobster and Jonah crab fisheries to continue to thrive, while significantly reducing the risk to critically endangered right whales of getting seriously injured or killed in commercial fishing gear,” said Michael Pentony, regional administrator of NOAA’s Greater Atlantic Regional Fisheries Office, in a statement Tuesday.

Members of the lobster fishing industry have said strict new rules could make it difficult to get lobsters to consumers. NOAA documents released on Tuesday that the annual cost of compliance could also range from about $10 million to more than $19 million.

The lobster industry has been successful in recent years, with heavy hauls of the crustaceans to the docks and strong prices for them at markets. However, the industry has also had to contend with volatile foreign markets and the economic impact of the coronavirus pandemic, which hit the seafood sector hard.

The U.S. lobster fishery is mostly in Maine, and the Maine Lobstermen’s Association has been one of the lead groups arguing in favor of whale protections the industry can live with. The group said in a statement Tuesday that it’s concerned the government is ”placing an unwarranted burden on the Maine lobster fishery.”

The group’s executive director, Patrice McCarron, said the Maine lobster fishery has not had a documented entanglement of a right whale in more than 17 years. She also said fishermen are concerned that future restrictions beyond those announced Tuesday could make it impossible to fish.

“The final rule is just the first round of economic impacts to us, and future restrictions will likely destroy Maine’s iconic lobster fishery,” McCarron said.

The new rules make a 950-square-mile area of the Gulf of Maine, a key fishing area, essentially off limits to lobster fishing from October to January. That puts lobstermen at risk, said Crystal Canney, executive director of Protect Maine’s Fishing Heritage Foundation. She said the rules could also make lobster fishing more dangerous by requiring more traps per trawl.

“Instead of saving right whales, what this decision has done is endanger not only the livelihoods of many of our lobstermen and women, but also their lives,” Canney said.

Right whales were once abundant off the East Coast, but they were decimated by hunting during the commercial whaling era. They’ve been listed as endangered since 1970, and conservationists have sounded the alarm about high mortality and low reproduction in the remaining population in recent years.

The right whale population was closer to 450 just a few years ago. They’re also jeopardized by climate change and fatal collisions with large ships.

Some environmental groups said Tuesday they feared the new rules don’t go far enough to protect the whales. The rules would be better if they did more to keep the whales away from trap rope altogether, said Gib Brogan, senior campaign manager for conservation group Oceana.

“If there are areas where whales are found or expected to be, that stress needs to be removed,” Brogan said. “We can’t just rely on the theory of weak rope.”

7 Stocks That Can Help You Profit From Summer Shortages

One of the lingering impacts of the Covid-19 pandemic is the supply chain disruptions that continue to bedevil many sectors. By now, every investor is aware of the global chip shortage that is disrupting many sectors that were projected to have strong growth in 2021.

But there are many more sectors that are being affected by supply chain disruptions. And this affects everything from big-ticket items like cars to everyday items like pet food and even bacon.

The focus of this special presentation is seven companies that stand to benefit from the current disruption in the supply chain. All of these companies delivered strong gains in 2020. Some of them have weakened in 2021, but that was before the full extent of the supply chain weakness was discovered.

As the economy reopens, the shortage of items is likely to continue and become much more notable. When they do, many of these stocks may get overpriced. That’s why now is the time to get in on these stocks that can help you work the supply chain in your favor.

View the “7 Stocks That Can Help You Profit From Summer Shortages”.