People wearing face masks walk past the Olympics Rings statue in Tokyo, Thursday, July 8, 2021. Japan is set to place Tokyo under a state of emergency starting next week and lasting through the Olympics, with COVID-19 cases surging and feared to multiply during the Games. (Shinji Kita/Kyodo News via AP) 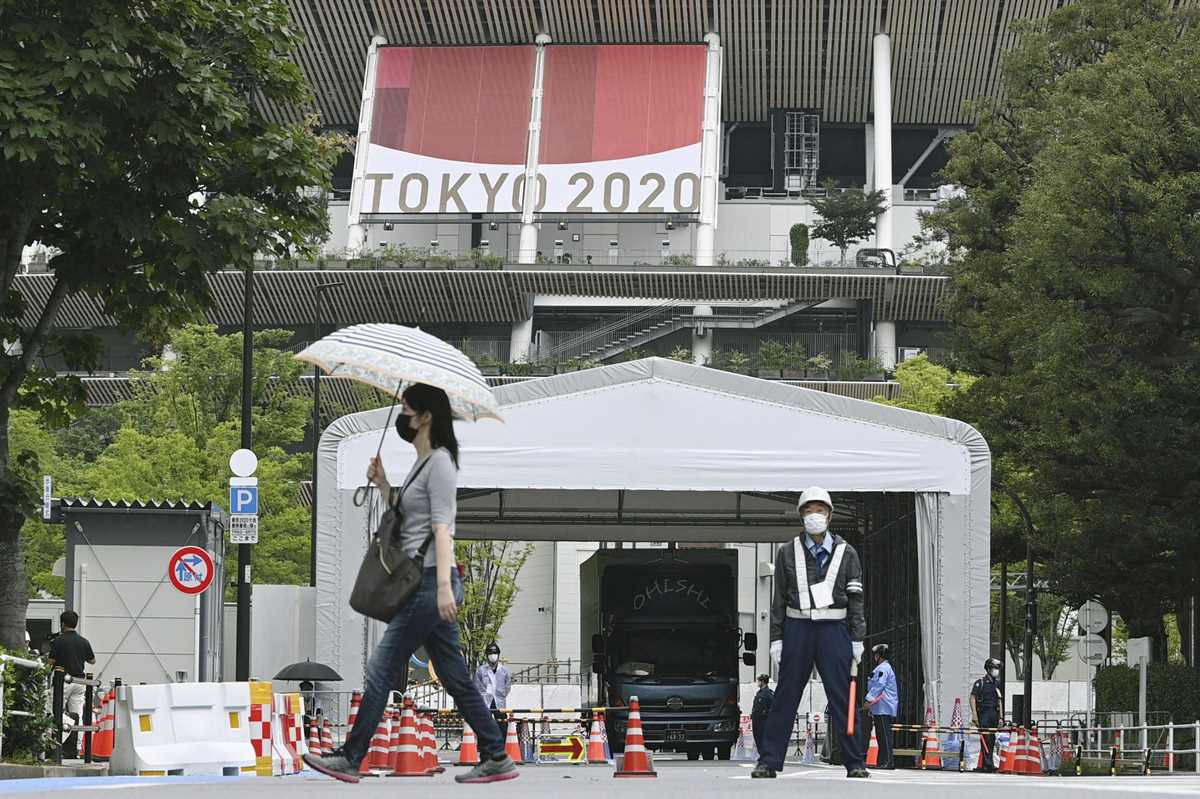 People wearing face masks walk past the National Stadium in Tokyo, Thursday, July 8, 2021. Japan is set to place Tokyo under a state of emergency that would last through the Olympics, fearing an ongoing COVID-19 surge will multiply during the Games. (Kyodo News via AP)

TOKYO (AP) — Japan is set to place Tokyo under a state of emergency that would last through the Olympics, fearing an ongoing COVID-19 surge will multiply during the Games.

At a meeting with experts Thursday morning, government officials proposed a plan to issue a state of emergency in Tokyo from next Monday to Aug. 22. The Summer Olympics, already delayed a year by the pandemic, begin July 23 and close Aug. 8.

The Games already will take place without foreign spectators, but the planned six-week state of emergency likely ends chances of a local audience. A decision about fans is expected later Thursday when local organizers meet with the International Olympic Committee and other representatives.

Tokyo is currently under less-stringent measures that focus on shortened hours for bars and restaurants but have proven less effective at slowing the spread of the coronavirus.

Prime Minister Yoshihide Suga is to formally announce the emergency plans later Thursday, hours after IOC President Thomas Bach was to land in Tokyo. Bach must self-isolate for three days in the IOC’s five-star hotel in the Japanese capital before heading to Hiroshima, where heavy rain is threatening flooding.

The upcoming emergency will be the fourth for Tokyo since the pandemic began and is a last-minute change of plan made late Wednesday after a meeting with experts who warned strongly against the government’s soft approach.

A main focus of the emergency is a request for bars, restaurants and karaoke parlors serving alcohol to close. A ban on serving alcohol is a key step to tone down Olympic-related festivities and keep people from drinking and partying. Tokyo residents are expected to face stay-home requests and watch the Games on TV from home.

“How to stop people enjoying the Olympics from going out for drinks is a main issue,” Health Minister Norihisa Tamura said.

If you own a cell phone, then mobile service providers hope you never get to see this video that could soon go viral.

It was shot in downtown Denver by a multi-millionaire, who exposed sensitive truths about mobile phones and 5G.

His experiment could strike a bad chord with mobile phone companies. But you’ve got to see what this man discovered and what it means for phone users in the weeks ahead.

Tokyo reported 920 new cases on Wednesday, up from 714 last week and its highest since 1,010 on May 13. The figure is in line with experts’ earlier estimate that daily cases in Tokyo could hit 1,000 before the Games and could spike into thousands in August.

Kazuhiro Tateta, a Toho University infectious diseases expert, noted an earlier state of emergency in the spring came too late to prevent hospitals in Osaka from overflowing with patients and said another delay should not be allowed.

Ryuji Wakita, director-general of the National Institute of Infectious Diseases, noted that two-thirds of Japan’s cases are from the Tokyo region and “our concern is the spread of the infections to neighboring areas.”

“The infections are in their expansion phase and everyone in this country must firmly understand the seriousness of it,” Dr. Shigeru Omi, a top government medical adviser, told reporters.

He urged authorities to quickly take tough measures ahead of the Olympics with summer vacations approaching. “The period from July to September is the most critical time for Japan’s COVID-19 measures,” Omi said.

7 Stocks That Cathie Wood is Buying And You Should Too

If you’re an investor that likes to go with the “hot hand,” then they don’t get much hotter than Cathie Wood. The founder and CEO of ARK Investment Management delivered returns of over 100% in all five of her firm’s exchange-traded funds (ETFs) in 2020.

The names of her funds showcase some of the hottest emerging growth trends in the market: financial technology (fintech), genomic revolution, innovation, autonomous technology/robotics, and next generation internet.

As you would expect, these funds contain some of the hottest growth stocks from the past year. And in the aftermath of the tech selloff, Wood is not backing away. In fact, she’s doubling down on her strategy. It might not be exactly a matter of being greedy while others are fearful; perhaps more like being prepared while others are distracted.

But the other thing about Wood’s selections is that many of them are not obscure names. These are companies that were among the hottest names in 2020. Wood simply believes that they still have room to run. And that’s one reason you should consider making them a part of your portfolio.

In this special presentation, we’re giving you just seven of the stocks that Cathie Wood is buying or has bought recently. We’ve attempted to pick out at least one stock from each of the ARK ETFs. As with any investment decision, it’s important that you perform your own research before making a decision.

View the “7 Stocks That Cathie Wood is Buying And You Should Too”.