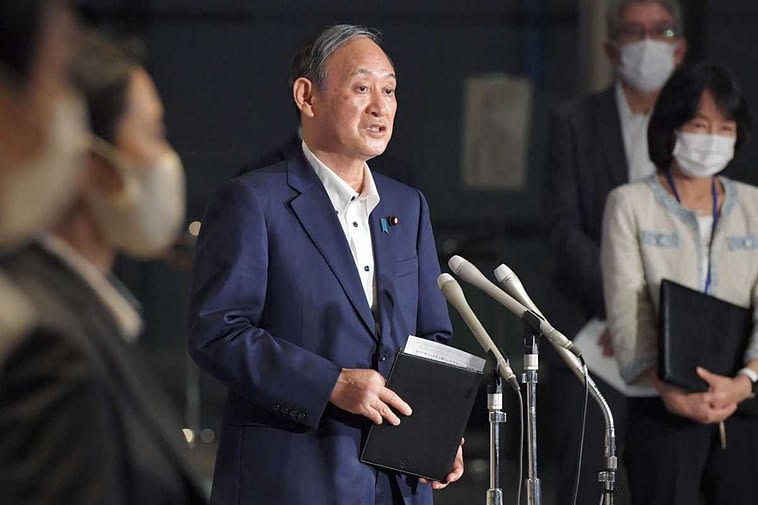 Japanese Prime Minister Yoshihide Suga speaks to reporters about the extension of a state of emergency at his official residence in Tokyo Monday, Aug. 16, 2021. The emergency for curbing surging COVID-19 cases will continue through Sept. 12 rather than ending at the end of this month as initially planned, the government decided Monday. (Yoshitaka Sugawara/Kyodo News via AP) 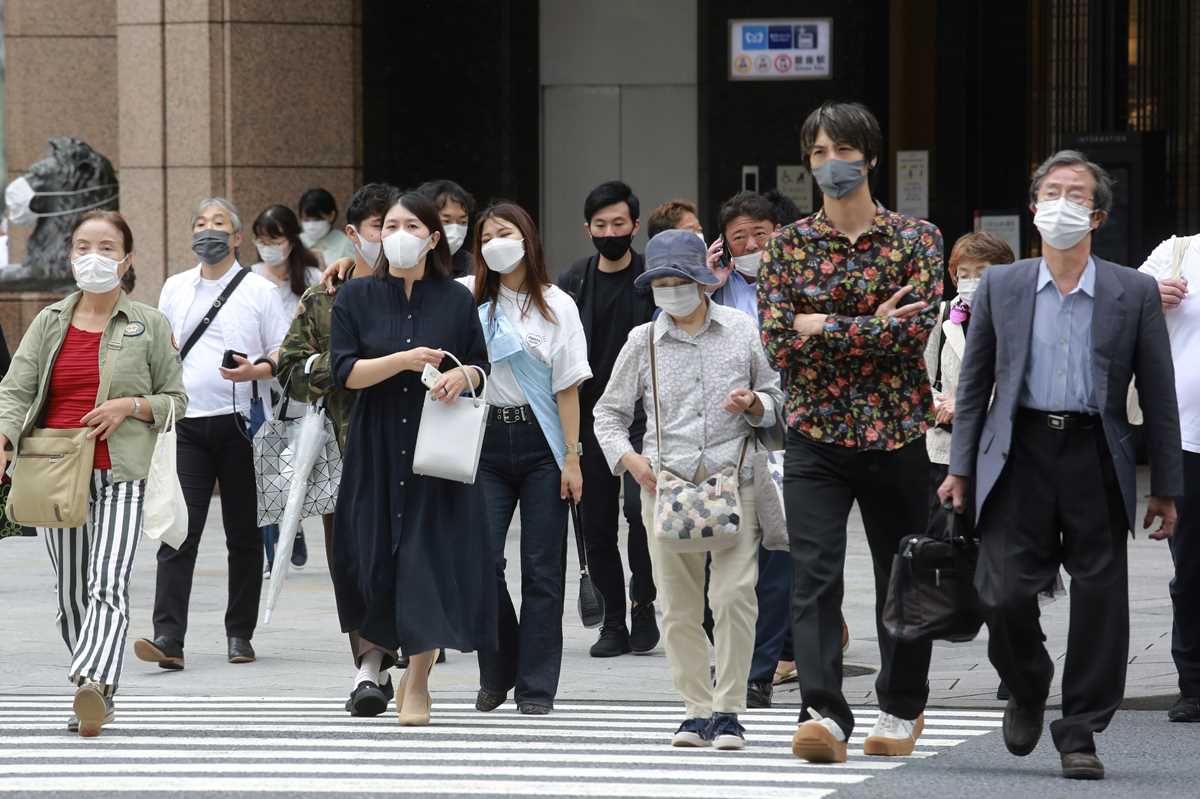 People wearing face masks to protect against the spread of the coronavirus walk on a crossing in Tokyo Monday, Aug. 16, 2021. Tokyo has been under what it calls a state of emergency. (AP Photo/Koji Sasahara) 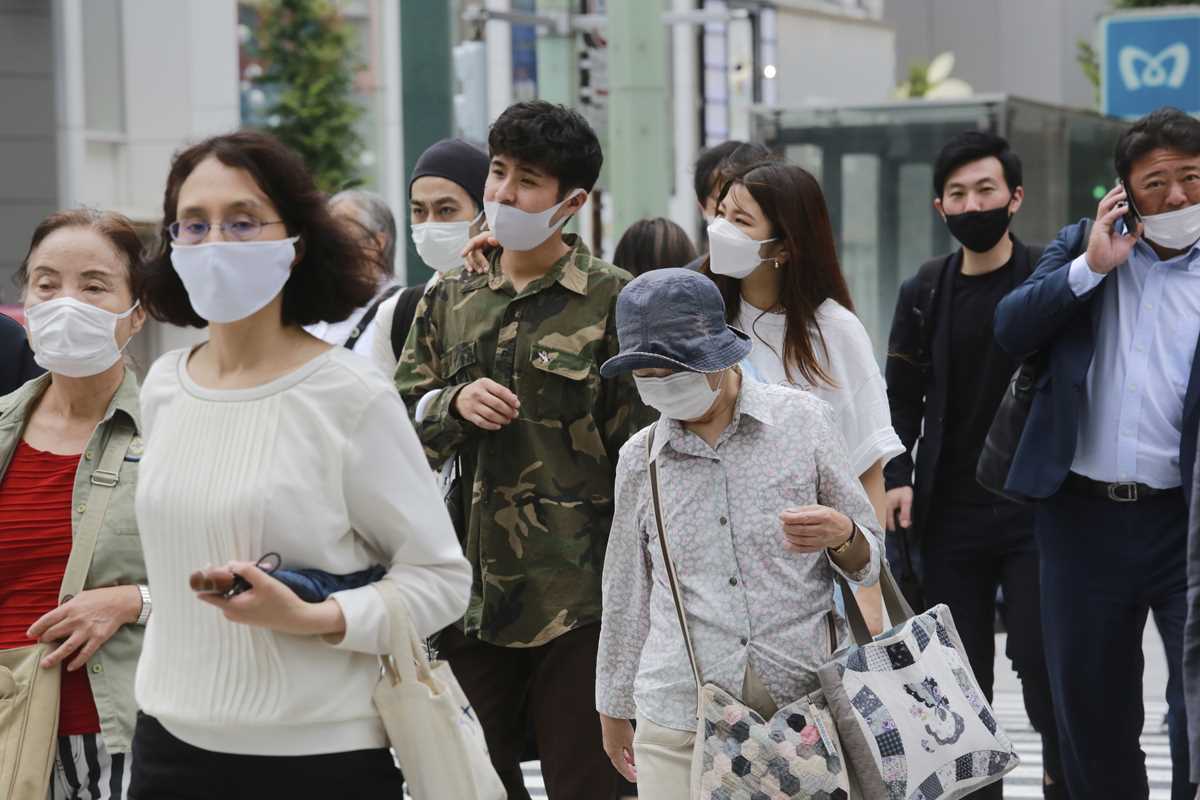 People wearing face masks to protect against the spread of the coronavirus walk on a street in Tokyo Monday, Aug. 16, 2021. Tokyo has been under what it calls a state of emergency. (AP Photo/Koji Sasahara)

TOKYO (AP) — Japan’s coronavirus state of emergency will continue through Sept. 12 rather than finishing at the end of this month as initially planned, the government decided Monday

With the virus continuing to spread in the country, the state of emergency for Tokyo, Osaka, Okinawa, and three other regions which began in July will be extended and expanded.

The measures were enforced throughout the recently concluded Tokyo Olympics, which took place with no spectators from the general public at many events. With the latest extension, the emergency will remain in force during the Tokyo Paralympics, which open Aug. 24 and close on Sept. 5.

“The surge in infections is reaching alarming record highs,” Prime Minister Yoshihide Suga said after meeting with other ministers about the move.

The decision will become official Tuesday, Suga said, adding that an expansion of hospital care is a priority, and that people waiting at home for hospital beds are getting checkups by phone.

The emergency measures center on asking eateries and bars to close at 8 p.m. and not serve alcohol. They will be expanded to several more prefectures including Kyoto, Hyogo and Fukuoka, currently under a less severe cautionary “quasi-emergency.”

New cases are reaching record highs in many areas, hovering at about 5,000 on most days during the last week in Tokyo.

Local mayors and governors have prodded the national government to declare broader emergencies to send a stronger message to people to discourage them from going out.

“We feel the situation has reached an extremely serious and critical state that puts human life at risk,” said Eikei Suzuki, governor of Mie prefecture in central Japan, where infections have jumped.

Nationally, only about a third of the population has been fully vaccinated as the more infectious delta variant spreads. Japan’s vaccine rollout got off to a late start and is proceeding at one of the slowest paces among industrialized nations.

Why the U.S. Treasury could surrender its “money monopoly” as soon as this fall.

Critics say the government has not done enough to prepare hospitals to accommodate COVID-19 patients.

Japan has had more than 15,000 COVID-19 related deaths, and worries have been growing about the health care system increasingly becoming stretched thin. Japanese media reports have shown people stuck in ambulances for hours looking for a hospital that will accept them.

The Health Ministry said the number of seriously ill people has now reached a record 1,603 nationwide.

Surveys and interviews show public discontent is simmering after the government went ahead with hosting the Olympics and Paralympics, allowing tens of thousands of athletes, sponsors and sports officials to enter the country. The events require thousands of medical staff, and massive virus testing is provided to athletes free of charge.

7 Reddit Stocks That Have a Chance to Be Special

As a conservative investor, I have a grudging admiration for the small army of retail traders that are making their dreams come true. I’m talking, of course, about the group of day traders who have made a habit of finding low-priced stocks (particularly those with high short interest) and attempting to send them “to the moon.”

They are called meme stocks, casino stocks, or Reddit stocks (named for the website where some of these traders congregate). It all means the same thing. And as much as I say I admire the traders who have profited from these stocks, I do it from a safe distance.

And in this special presentation, we’re going to look at seven Reddit stocks that might just have a chance to have a life beyond this current mania phase.

View the “7 Reddit Stocks That Have a Chance to Be Special”.