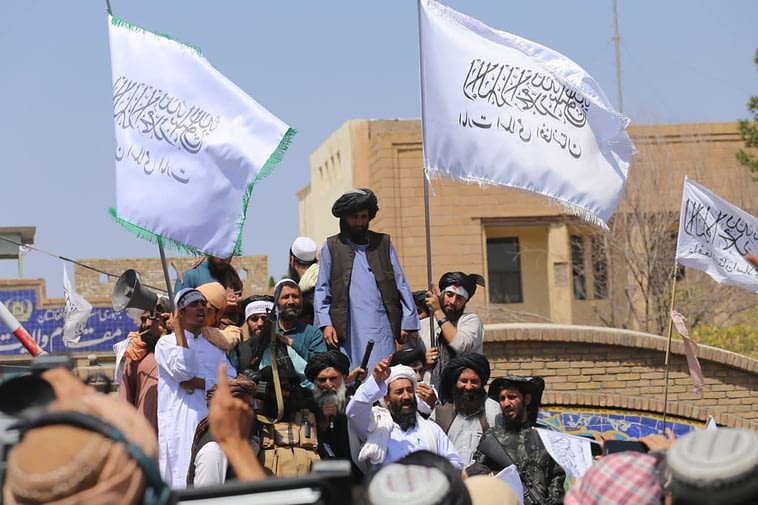 Taliban members gather and make speeches in front of Herat governorate after the completion of the U.S. withdrawal from Afghanistan, in Herat, Afghanistan on August 31, 2021.

India announced its first formal diplomatic meeting with the Taliban on Tuesday — their first official talks since the group seized power in Afghanistan as the U.S. withdrew its forces from there.

The Indian foreign ministry said India’s ambassador to Qatar, Deepak Mittal, met with the head of the Taliban’s political office, Sher Mohammad Abbas Stanikzai. The Taliban had requested the meeting, which took place at the Indian embassy in Doha, according to the ministry.

Mittal and Stanikzai discussed the safety, security and early return of Indian nationals who are stranded in Afghanistan as well as travel prospects for Afghan minorities who want to visit India, the Ministry of External Affairs said.

The Indian ambassador also raised New Delhi’s concerns around Afghanistan being used as a base for terrorism.

“The Taliban Representative assured the Ambassador that these issues would be positively addressed,” the foreign ministry said.

Read more on the developments in Afghanistan:

Days before Tuesday’s meeting, Indian media reported that Stanikzai said the Taliban wanted to continue Afghanistan’s political, economic and cultural ties with India. It was reportedly the first time a member of the Taliban leadership spoke about the future of India-Afghanistan relations since the group captured Kabul.

The Taliban’s return to power would likely impact Afghanistan’s neighbors, amid rising concerns of regional instability, refugee inflows and the prospect of Afghanistan becoming a haven for terrorist activities again.

New Delhi did not have diplomatic relations with the Taliban when they were last in power in the 1990s, in part because of the militant group’s ties to Pakistan.

But India had forged close ties with the U.S.-backed civilian government in Kabul over the last two decades and provided Afghanistan with development assistance. Reports said that India has invested $3 billion in multiple infrastructure and trade projects and has undertaken over 400 projects in Afghanistan.

Analysts say India’s commitments and the recent shift in power has left New Delhi in a tough strategic state.