This computer generated image shows a Gucci virtual garden on Roblox. Anyone whose avatar is traipsing around the Roblox online game platform these days might run into other avatars sporting Gucci handbags, sunglasses or hats. The digital-only items are part of the Gucci’s time-limited collection for Roblox, as the Italian fashion house that prides itself on hand-craftsmanship is dipping its toes into an expanding virtual space where many of its youngest fans already are at home. (Roblox via AP) 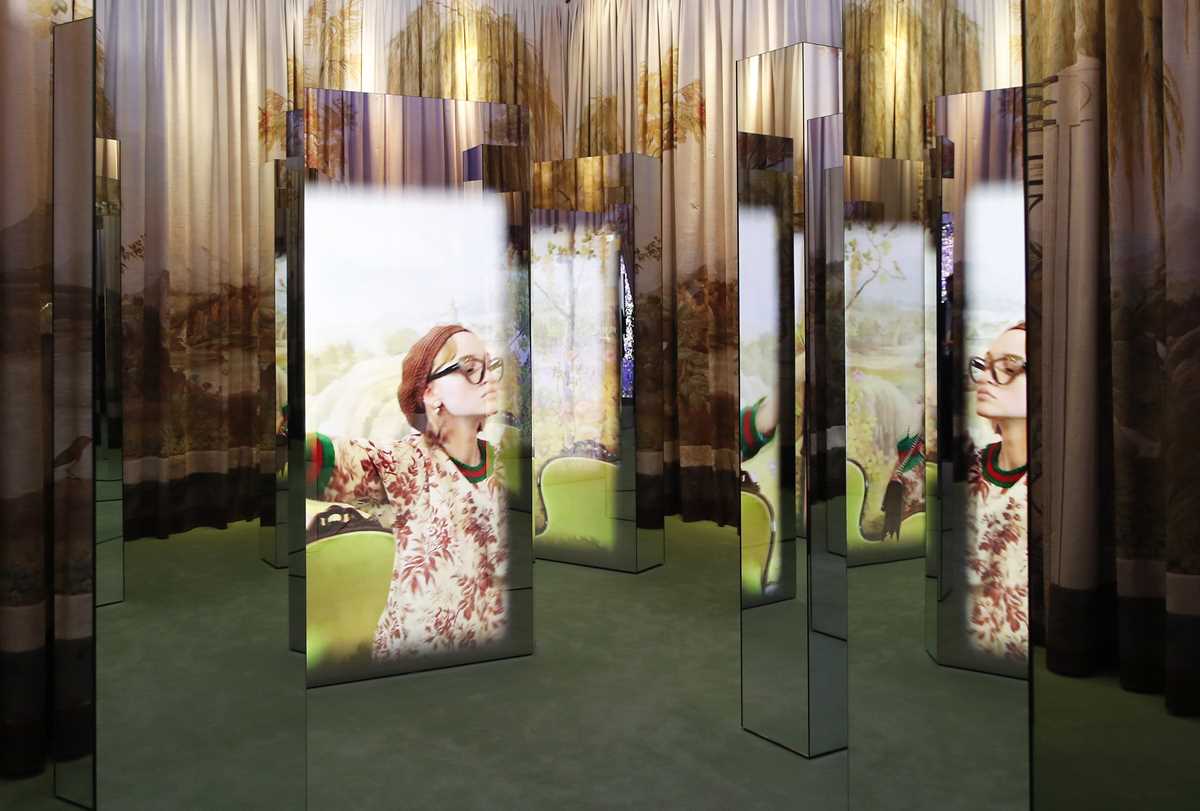 In this Thursday, May 13, 2021 file photo, a view of a Gucci advertisement campaign selected for an exhibition to celebrate the vision of Gucci’s creative director Alessandro Michele at the Gucci Garden Archetypes, in Florence, Italy. Anyone whose avatar is traipsing around the Roblox online game platform these days might run into other avatars sporting Gucci handbags, sunglasses or hats. The digital-only items are part of the Gucci’s time-limited collection for Roblox, as the Italian fashion house that prides itself on hand-craftsmanship is dipping its toes into an expanding virtual space where many of its youngest fans already are at home. (AP Photo/Antonio Calanni, File) 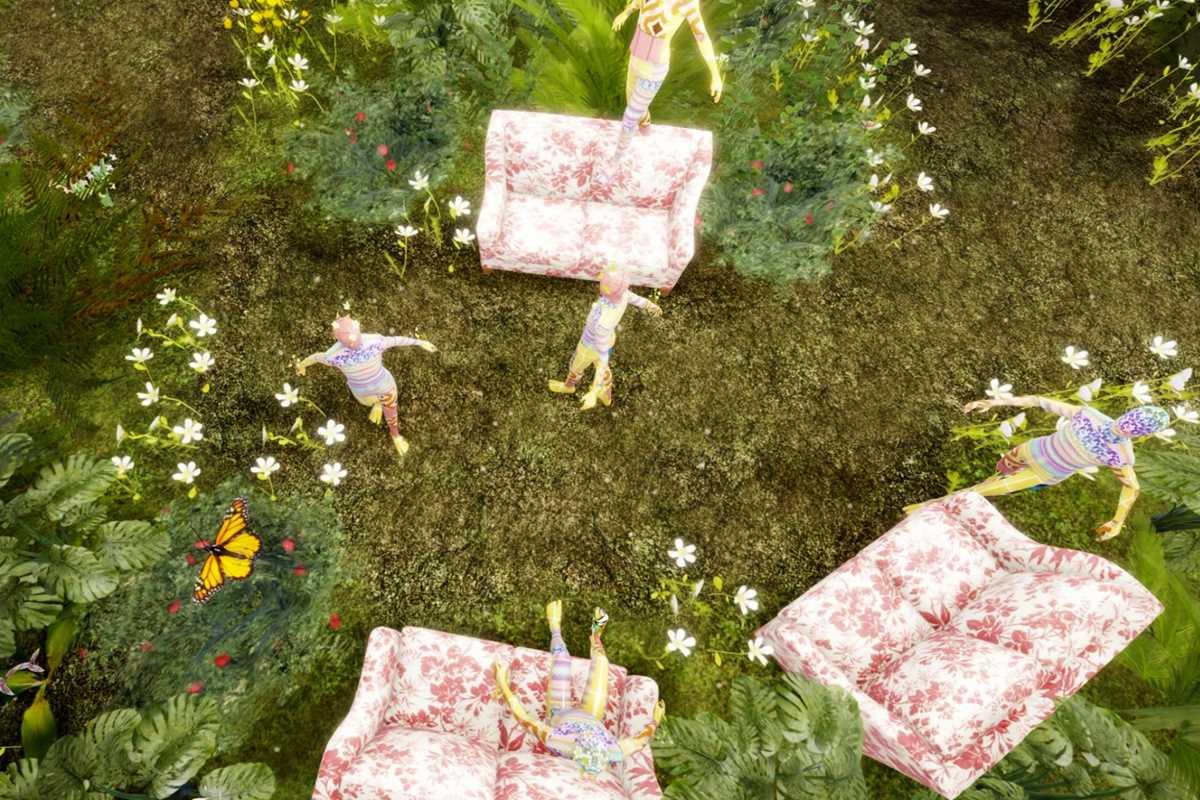 This computer generated image shows a Gucci virtual garden on Roblox. Anyone whose avatar is traipsing around the Roblox online game platform these days might run into other avatars sporting Gucci handbags, sunglasses or hats. The digital-only items are part of the Gucci’s time-limited collection for Roblox, as the Italian fashion house that prides itself on hand-craftsmanship is dipping its toes into an expanding virtual space where many of its youngest fans already are at home. (Roblox via AP)

MILAN (AP) — Anyone whose virtual alter ego is wandering around the Roblox online game platform these days might run into other avatars sporting Gucci handbags, sunglasses or hats.

The digital-only items were part of a limited Gucci collection for Roblox, a step by the fashion house that prides itself on Italian craftsmanship to enter an expanding virtual space where many of its youngest admirers already are at home.

Players in the metaverse — where virtual worlds, augmented reality and the internet meet — say the big-name fashion collaboration represents a new era of virtual-real world interplay, a space in which smart product placement meets the desire of consumers to express their personalities in the virtual world.

While the Gucci Garden space on Roblox was open for two weeks last month, the platform’s 42 million users could spend from $1.20 to $9 on collectible and limited-edition Gucci accessories. Items were hidden in the virtual Gucci Garden, which echoed real-world Gucci Garden exhibitions in Florence and other global cities. Some items were offered for free, and the exclusivity was underlined with limited time releases.

The experience allowed Roblox’s core demographic — roughly ages 9 to 15 — a digital entrée to the rarified world of luxury goods that few can dream of in the real world. Now that the space is closed, the limited edition items have even greater cachet. According to the developer, more than 4.5 million items were “won.”

Many parents may scratch their heads at paying real money to accessorize an avatar, but Generation Z players have long been prepped for this evolution.

They ran through physical streets and parks to intercept and capture Pokemon Go characters, part of an augmented reality mobile game that launched in 2016. Many took the edge off pandemic lockdown by playing with real-world friends over gaming platforms. On Roblox, dressing up avatars is old hat.

Newly-minted stock market millionaires will be making a tour de force in 2021 by being early on select green energy stocks. This US$0.25 stock just seized control of an ultra-rare clean energy metal America needs to lead the green energy revolution.

“Gen Z, they sometimes see virtual products as more valuable than physical products,” Christina Wootton, the vice president for brand partnerships at Roblox, said. “We are definitely seeing that on Roblox, where it is all about storytelling and self-expression. There are so many people who come together and social and connect with their friends, and they want to represent their digital selves through fashion.’’

While the Gucci items users bought only can be “worn” on the Roblox platform, it is just the tip of the metaverse iceberg.

Similar items made and traded in the metaverse are known as non-fungible tokens (NFTs) — digital objects backed by blockchain technology certifying their authenticity, and often uniqueness. NFTs, which might be anything from personalized “skins,” or costumes, for avatars to digital art, can be traded ad-infinitum, potentially growing in value with each trade. Their ownership is not limited to any single platform.

Even on Roblox, which has its own marketplace where items can be traded, the Gucci Dionysus Bag with Bee was resold for over $4,100 worth of Robux — exceeding the price of a real Gucci Dionysus bag and a huge premium of the original price of 475 Roblox, roughly $4.75. Only 851 of the bags were available during two releases, making it the rarest piece in the collection, compared with the 2.6 million wide-brim denim hats that were snapped up.

Unlike NFTs, the astronomically priced Dionysus bag cannot be traded outside of the Roblox platform, making it seemingly a vanity investment for a super-fan.

The metaverse’s potential for the fashion world goes well beyond the world of gaming and extends into digital ecosystems that are still under construction. So-called decentralized worlds are seeing a huge influx of money, with billions being spent to iron out technical issues.

Boson Protocol, a technology company, is bridging the gap between the metaverse and physical world with a new venture designed to allow consumers to purchase fashion NFTs for their avatars from a platform, Decentraland. NFTs, in turn, will contain vouchers redeemable for corresponding real-world items. The project is expected to launch in two months.

“If we increasingly are going to exist in these digital spaces, then objects that are scarce, unique and ownable, of course, are going to have value in those spaces,’’ London-based Boson Protocol co-founder Justin Banon said. “All of these things of social signaling in the real world are just, in fact, perhaps more important in the digital world.”

It’s only natural that fashion would pave the way for the less digitally savvy consumers, who may shy away from Bitcoin and balk at multimillion-dollar sales of NFTs that have captured the attention of artists and collectors alike.

“Fashion brands have to go where other people are not going. The whole point of a fashion brand is to stand out,” Allen Adamson, co-founder of marketing consultancy Metaforce, said.

For Gucci, the biggest return on investment from the Roblox tie-up “is to become part of that generation’s world,” Adamson said.

“No one shares ordinary,’’ Adamson said. “’My avatar is wearing a Gucci belt’ is a little different” and perhaps even catchier for a certain audience than spotting a real Gucci bag on the street.

Gucci CEO Marco Bizzarri said that more than generating revenue, the Roblox collaboration was a way to tap fresh creative veins and stay apace of an evolving world where fashion, music, films and technology increasingly mashup.

“Who knows what the industry will look like in 10 years? We want to start before everyone else to get up to speed,’’ Bizzarri said at the physical Gucci Garden opening in Florence. “Certainly, they are not operations that bring a lot of business now, but they could be a source of business tomorrow.”

“Fashion has become more than a boutique along the street in a capital. I think we are in a phase when maybe the world wants to go beyond the industrialized revolution and doesn’t know how to do it,” Michele said. “Especially now, in this phase of the pandemic, it is a big chance to accelerate changes.”

Featured Article: What is the definition of a trade war?

Resolving global shipping delays ‘may take a while’

WISH Stock: Buy Before it Joins GME and AMC as a Retail Favorite