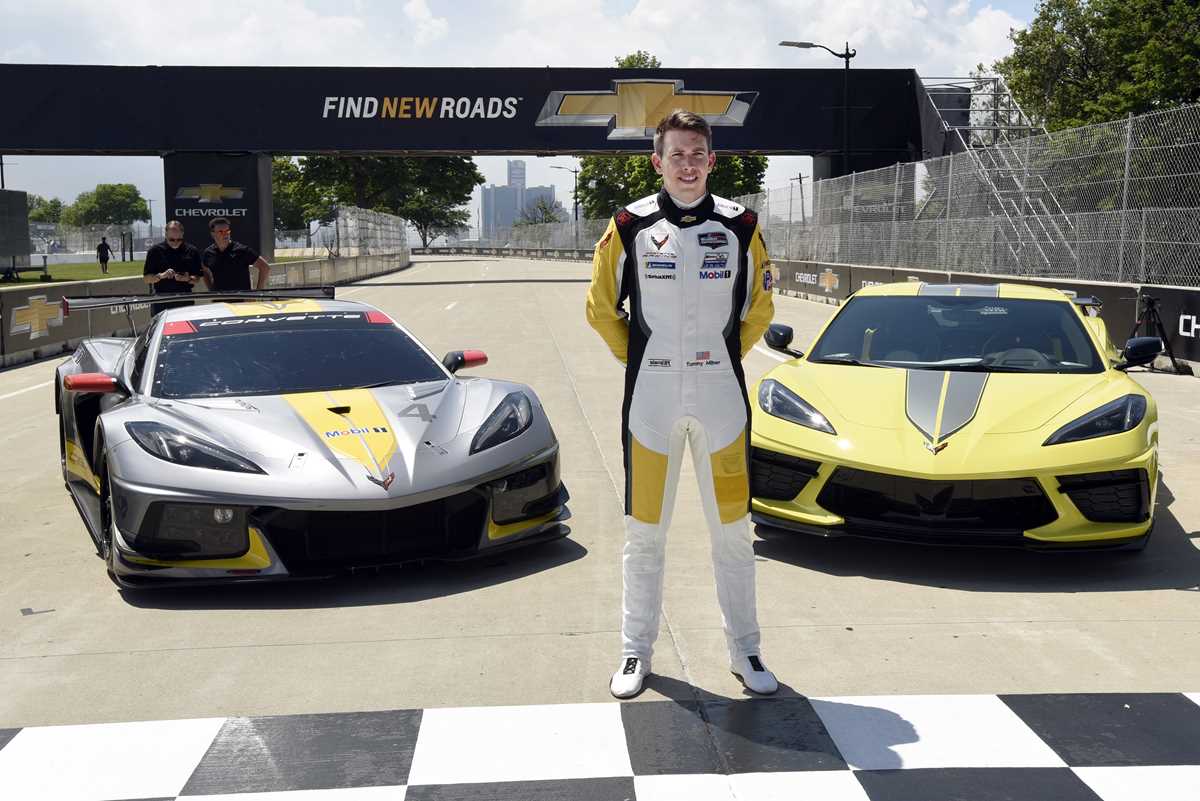 Tommy Milner stands in front of a Corvette C8.R race car, left, and a 2022 Corvette Stingray IMSA GTLM Championship Edition road car following a news conference at Raceway at Belle Isle, Wednesday, June 9, 2021, in Detroit. With Le Mans rescheduled to August, the conflict that had prevented Corvette from competing at Belle Isle had been eliminated and the two-car program will race Saturday in GM’s backyard for the first time since 2008. (AP Photo/Jose Juarez) 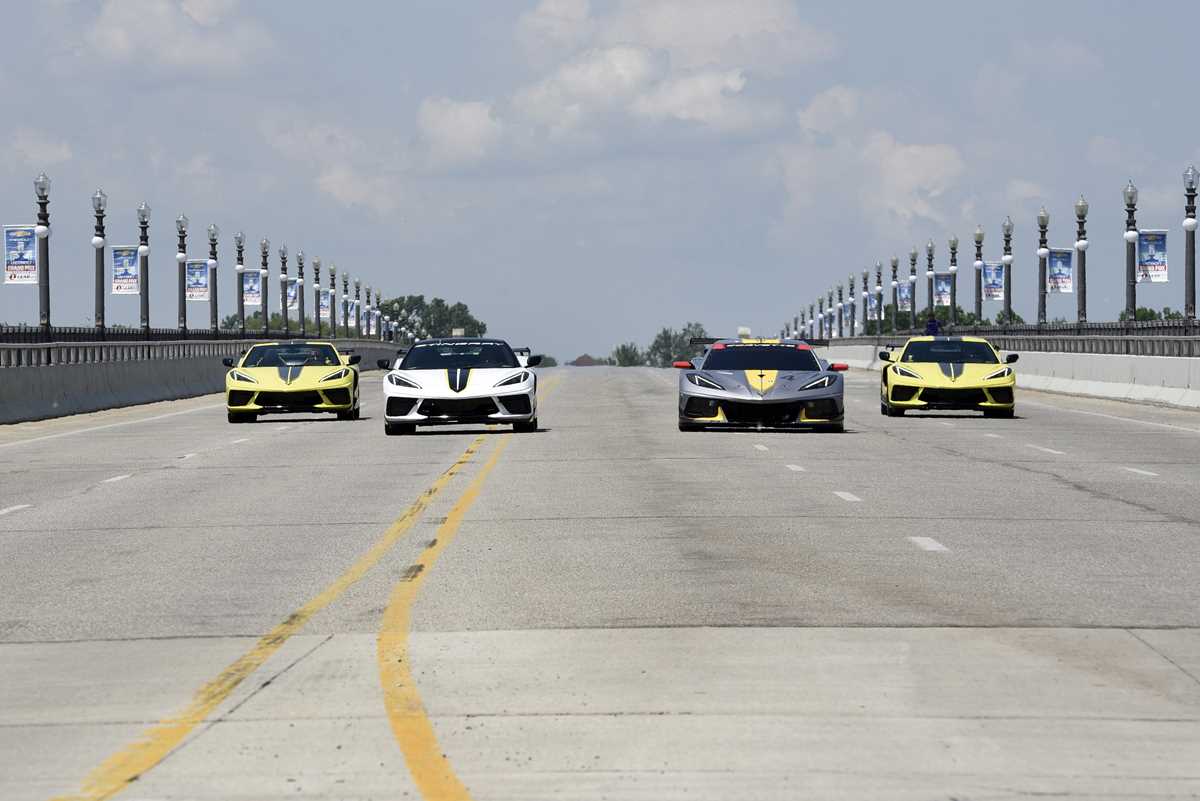 The 2022 Corvette Stingray IMSA GTLM Championship Edition vehicles, left and right, along with a Corvette pace car, center left, and a Corvette C8.R race car, center right, are driven across the MacArthur Bridge toward the Raceway at Belle Isle for a news conference Wednesday, June 9, 2021 in Detroit. (AP Photo/Jose Juarez) 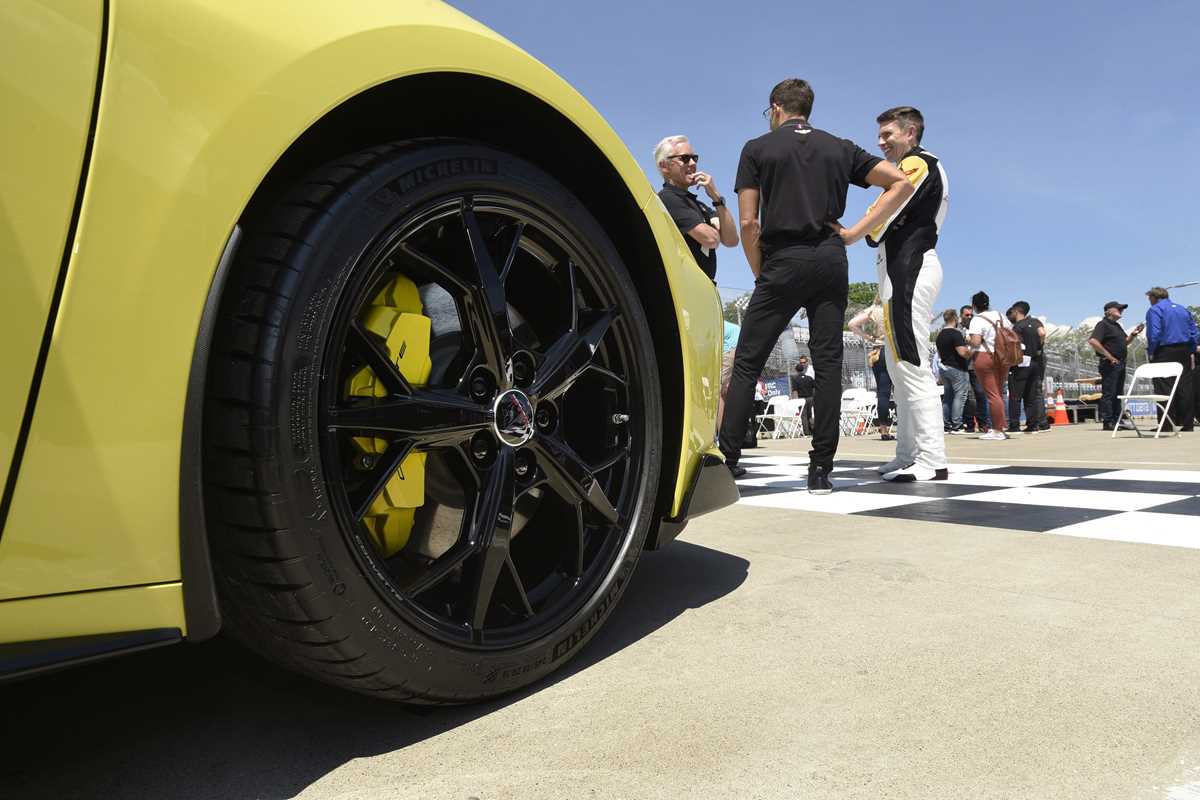 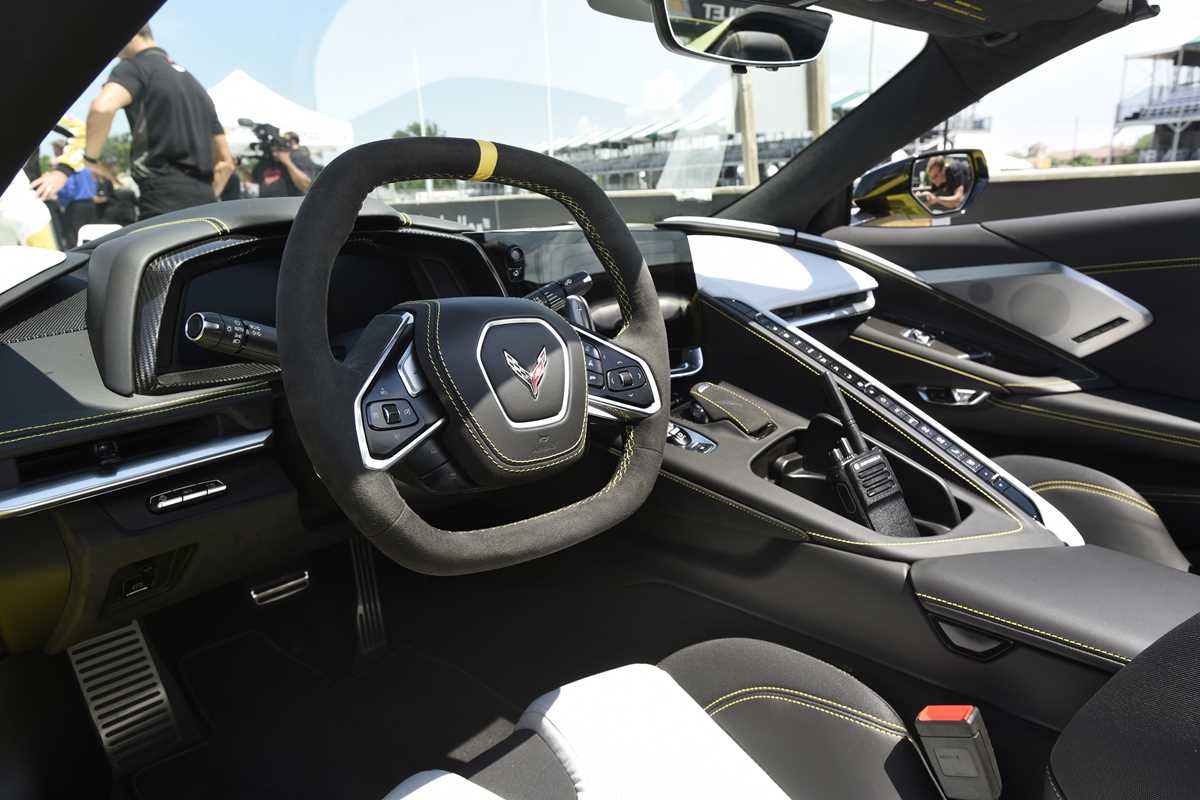 Part of the interior for the 2022 Corvette Stingray IMSA GTLM Championship Edition road car is seen following a news conference at Raceway at Belle Isle in Detroit, Wednesday, June 9, 2021. With Le Mans rescheduled to August, the conflict that had prevented Corvette from competing at Belle Isle had been eliminated and the two-car C8.R program will race Saturday in GM’s backyard for the first time since 2008. (AP Photo/Jose Juarez)

DETROIT (AP) — What would you splurge on if you won the lottery? Most people have a dream car or two on their list, but alas, most people never win the lottery.

General Motors has unveiled a luxury sports car that is competitive with its more exotic (read: expensive) counterparts but isn’t completely out of reach for drivers looking for some flash.

The 2022 IMSA GTLM Championship Edition Stingray was revealed Wednesday less than three miles from GM headquarters. MacArthur Bridge was closed briefly so a quartet of mid-engine Corvette C8.R’s could cross the swirling Detroit River and enter the Raceway at Belle Isle.

The cars were piloted by Corvette Racing drivers Jordan Taylor, Tommy Milner, Nick Tandy and Antonio Garcia, who normally would be in France this weekend for the 24 Hours of Le Mans race. With Le Mans rescheduled to August, the conflict that had prevented Corvette from competing at Belle Isle had been eliminated and the two-car program will race Saturday in GM’s backyard for the first time since 2008, hitting the track right after IndyCar’s doubleheader opener.

The Stingray is a supercar with a base price starting at $62,195. The IMSA GTLM Championship Edition starts at $87,085 for the coupe and $94,085 for the convertible — still a reasonable price point for a car fanatic who wants to own a vehicle that resembles the Corvette C8.R race cars and is in the same class as a more expensive Ferrari or McLaren.

“It’s combining supercars with more attainability,” Harlan Charles, product manager of Chevrolet Corvette, told The Associated Press. “Not that it’s inexpensive, but it’s to the point where anybody who works can save up and it is attainable someday.

“Only we can do a car like this because Corvette, being an attainable car, we’ve applied that to the mid-engine concept and we’ve made a unique sports car that’s never existed. We’ve taken the portability, the everyday drivability, and we’ve added those exotic mid-engine attributes that are previously only available in these triple-the-price type cars.”

It’s clear that there’s a giant “Green Boom Coming.” And here’s how you can get it on it…

The 2020 Corvette was the first with a mid-engine in the 67-year history of the car and it gave GM an affordable rival to everything in its class from the Audi R8 to the Lamborghini Aventador. The special edition available next year pays homage to the 2020 racing season when Corvette Racing swept IMSA’s sports car manufacturers, drivers and team titles.

GM will make only 1,000 of the special edition Stingrays — all in its Bowling Green, Kentucky, assembly plant — partly because it wants the car to be a hot ticket item. The luxury sports car market isn’t flooded with volume but is highly competitive with the most entries of nearly any category.

“You’re getting everybody’s best shot in the luxury sports car market, the Europeans are in, everybody gives this market their best shot,” Charles said.

GM considers the Stingray a daily driver — the mid-engine has improved traction that makes for an all-weather vehicle — whereas many of its class rivals can sit inside garages as expensive showpieces only brought out for special occasions. GM is also pitching to a customer base it believes wants luxury from a domestic brand.

“It’s American technology and people are patriotic and almost all of our competitors are European,” said Charles. “This shows we can compete with the best in the world on an American-based car and that’s a real source of pride for us.”

Featured Article: Compound Interest and Why It Matters When Investing

7 Sports Betting Stocks That Will Shine Beyond March Madness

One of the many consequences of the novel coronavirus was the shutdown of live sports. For sports-minded individuals, one of the events that were missed the most was the NCAA Basketball Tournament affectionately known as March Madness.

But in addition to missing the entertainment that sports provide, cities and states realized, if they didn’t already, that sports are an economic necessity.

Live sports may also be a key to their post-pandemic future. But this goes beyond hotels and restaurants.

Sports betting has become big business. Currently, 25 states and the District of Columbia have legalized sports betting either by statute or by ballot initiative. That list is likely to grow. Many states face budget deficits and want to legalize sports betting for the revenue that it could receive.

And this is about more than allowing gamblers to place bets via a sportsbook in a casino. The real driver for this is mobile sports betting. According to the American Gaming Association, over 47 million people are expected to place bets during the NCAA basketball tournament, with approximately one-third of those bets (17.8 million) being placed online.

To help you take advantage of this still-emerging trend, we’ve put together this special presentation. Here we’ll highlight seven sports betting stocks that should generate significant revenue during March Madness and beyond.

View the “7 Sports Betting Stocks That Will Shine Beyond March Madness”.

AMC Stock: Should You Buy AMC Entertainment? What the Bulls and Bears Are Saying