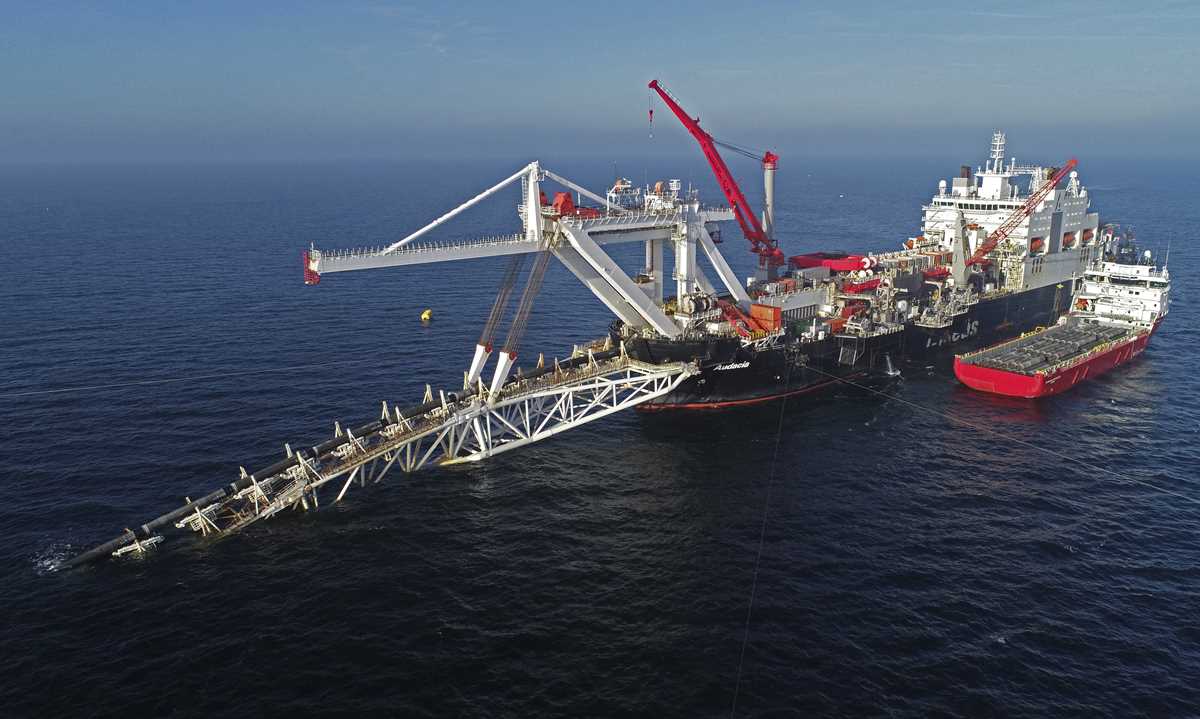 A ship works offshore in the Baltic Sea on the natural gas pipeline Nord Stream 2 from Russia to Germany, on Nov. 11, 2018. Denmark’s maritime authority said Monday Sept. 26, 2022 that a gas leak had been observed in a pipeline leading from Russia to Europe underneath the Baltic Sea that is dangerous to shipping traffic. (Bernd Wuestneck/dpa via AP, File)

BERLIN (AP) — The Nord Stream 1 pipeline leading from Russia to Europe has reported a drop in pressure, only hours after a leak was reported in the Nord Stream 2 pipeline in the Baltic Sea off Denmark, the German economy ministry said.

“We are investigating this incident as well, together with the authorities concerned and the Federal Network Agency,” the ministry said in a statement late Monday. “We currently do not know the reason for the drop in pressure.”

Both pipelines carry natural gas from Russia to Europe. While the Nord Stream 2 pipeline has never operated, Nord Stream 1 had been carrying gas to Germany until earlier this month, when Russian energy giant Gazprom cut off the supply, claiming there was a need for urgent maintenance work to repair key components.

Despite not delivering gas to Europe, both pipelines have still been filled with gas, German news agency dpa reported.

After the earlier leak was detected on Monday, The Danish maritime authority has issued a navigation warning and established a five-nautical mile prohibition zone around the pipeline “as it is dangerous for ship traffic.”

Gazprom’s explanation of technical problems as the reason for reducing gas flows through Nord Stream 1 have been rejected by German officials as a cover for a political power play following Russia’s invasion of Ukraine.

Gazprom started cutting supplies through Nord Stream 1 in mid-June, blaming delays to the delivery of a turbine that had been sent to Canada for repair

Germany has been heavily reliant on natural gas supplies from Russia, but since Moscow launched its war in Ukraine on Feb. 24, Berlin has been trying to look for other sources of energy.

Fears of a winter shortage have eased somewhat in the country as gas storage has progressed in recent weeks.

“We do not see any impact on the security of supply,” the economy ministry said, referring to the pressure drop in Nord Stream 1. “Since the Russian supply stopped at the beginning of September no gas has flowed through Nord Stream 1 anymore. Storage levels continue to rise steadily. They are currently at about 91%.”

Later Tuesday, officials from Poland, Norway and Denmark will inaugurate a new gas pipeline that is the culmination of years of efforts to end decades of dependence by Poland and other countries on Russia gas.

Baltic Pipe will bring gas from Norwegian deposits, via Denmark and on the Baltic Sea bed, to a compressor station near Goleniow, in northwestern Poland.

Since 2018, one of the most compelling sectors for growth-oriented investors is the sports betting sector. That was the year the U.S. Supreme Court allowed states to legalize sports betting. Since then 30 states have taken that step including New York and New Jersey which are two key markets. In fact, the state of New York broke a record when it legalized online sports betting in January 2022.

This makes it a good time to consider investing in sports betting stocks. Many of these stocks are trading at significant discounts as part of the broad market sell-off. The reason for this is competition. There are a nearly endless number of online sportsbooks competing for consumer dollars.

And it would appear there’s enough revenue to go around. According to Data Bridge Market Research, the global sports betting market is expected to grow at a compound annual growth rate of 10.26% between now and 2029.

View the “7 Sports Betting Stocks to Buy for Their Long-Term Possibilities”.