Chinese military officers march down the steps of the Great Hall of the People in Beijing, Tuesday, Sept. 27, 2022. A former top graft buster at China’s ministry for intelligence and counterintelligence has been indicted on bribery charges, just weeks before a major congress of the ruling Communist Party whose leader Xi Jinping has made fighting corruption a signature issue. (AP Photo/Ng Han Guan) 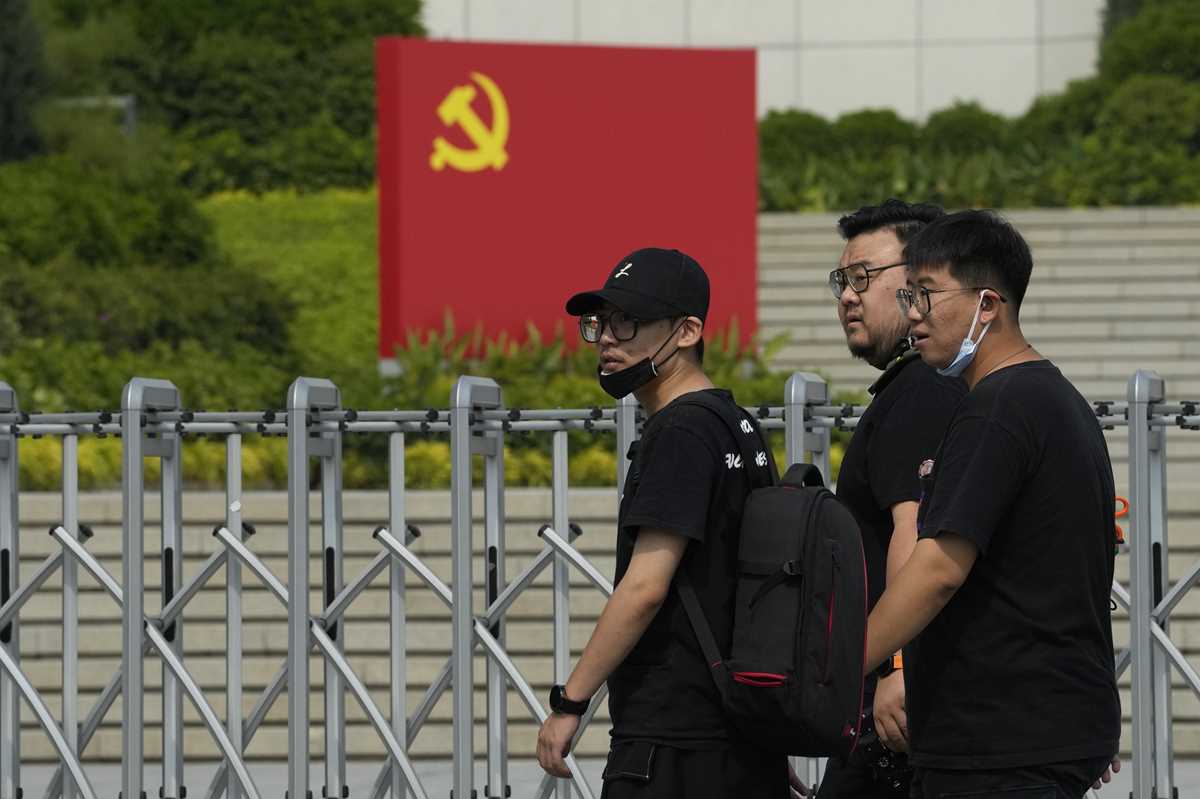 Visitors to a museum past by the Community Party flag in Beijing, Tuesday, Sept. 27, 2022. A former top graft buster at China’s ministry for intelligence and counterintelligence has been indicted on bribery charges, just weeks before a major congress of the ruling Communist Party whose leader Xi Jinping has made fighting corruption a signature issue. (AP Photo/Ng Han Guan) 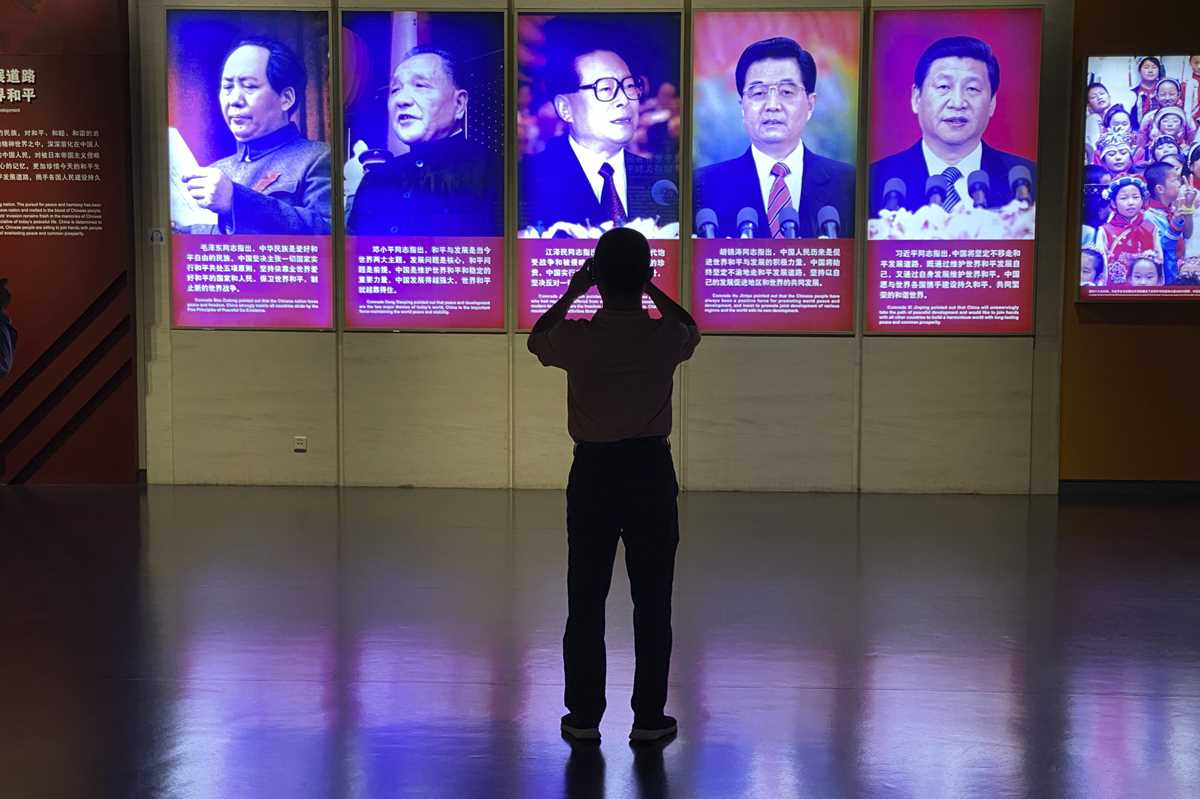 A visitor to a museum takes photos of the portraits of Chinese President Xi Jinping and his predecessors in Beijing, Tuesday, Sept. 27, 2022. A former top graft buster at China’s ministry for intelligence and counterintelligence has been indicted on bribery charges, just weeks before a major congress of the ruling Communist Party whose leader Xi Jinping has made fighting corruption a signature issue. (AP Photo/Ng Han Guan) 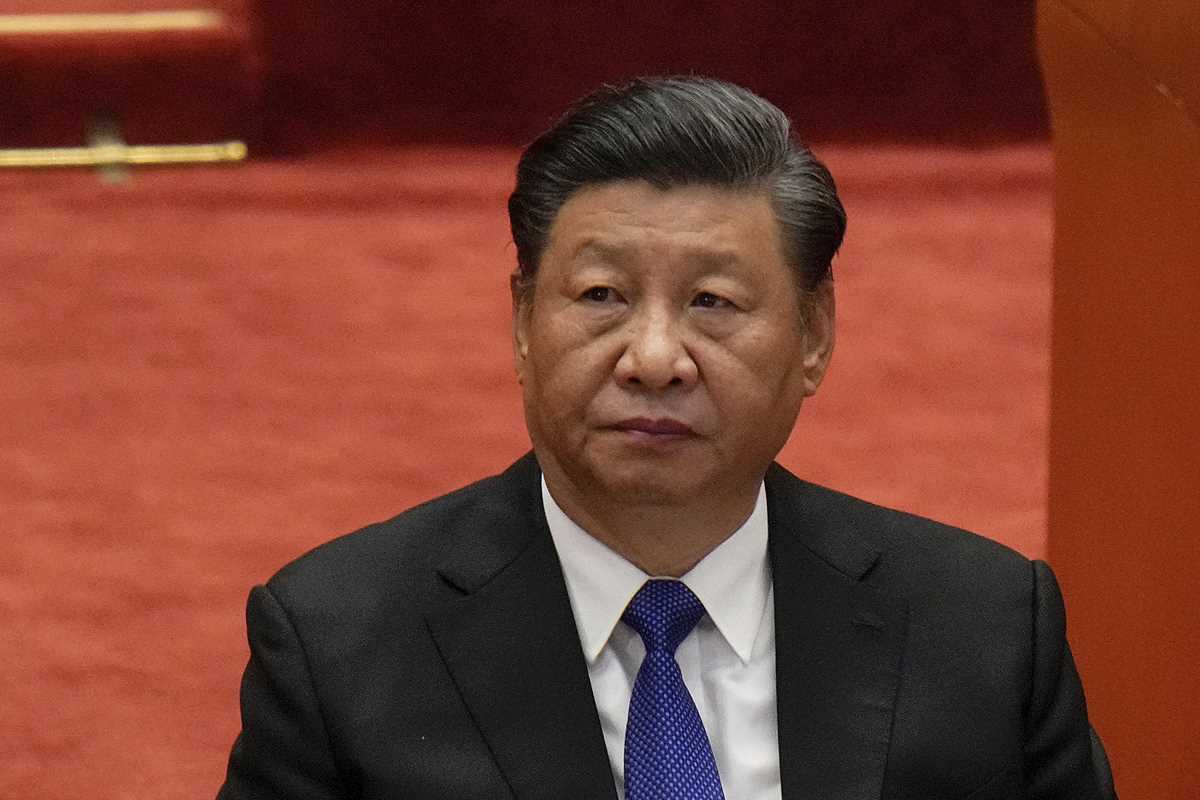 Chinese President Xi Jinping attends an event commemorating the 110th anniversary of Xinhai Revolution at the Great Hall of the People in Beijing on Oct. 9, 2021. A former top graft buster at China’s ministry for intelligence and counterintelligence has been indicted on bribery charges, just weeks before a major congress of the ruling Communist Party whose leader Xi Jinping has made fighting corruption a signature issue. (AP Photo/Andy Wong, File)

Zhang Yongze is the latest high-level former official to be indicted on graft charges just weeks before a major congress of the ruling Communist Party, whose leader Xi Jinping has made fighting corruption a signature issue.

Zhang “took advantage of his former positions and power to seek benefits for others” in obtaining government contracts and obtaining promotions, for which he “illegally accepted a large amount of money and valuables in return,” the official Xinhua News Agency quoted the indictment as saying.

Zhang’s case is being handled by prosecutors and courts in the western province of Shaanxi, in keeping with the practice of moving cases elsewhere when high-ranking officials and serious charges are involved. High on the Tibetan Plateau, the region holds an abundance of mineral wealth and is run as a virtual police state to guard against pro-independence sentiment among its native population who are ethnically, linguistically and culturally distinct from China’s Han majority.

Deadly antigovernment protests swept across the region in 2008, fueled by heavy-handed Communist Party rule and a loss of economic opportunities to Chinese migrants. Security forces ruthlessly crushed the protests, with an unknown number imprisoned or executed.

On Wednesday, a former top graft buster at China’s ministry for intelligence and counterintelligence was indicted on bribery charges. Liu Yanping, who headed the State Security Ministry’s branch of the party’s Central Commission for Discipline Inspection was a further reminder of Xi’s vow to attack corruption “amongst both the flies and tigers.”

On Friday, former deputy police minister Sun Lijun was given a death sentence with a two-year reprieve on charges of manipulating the stock market, taking bribes and other offenses. The case involved at least two former Cabinet officials.

State media said Liu had accepted “huge” amounts of property from others in return for favors. Those often include derailing investigations or offering promotions for cash.

He was expelled from the party earlier this month in a sign he would be indicted, tried and almost certainly handed a lengthy prison term.

In that initial investigation, it was found that Liu had “lost his ideals and convictions,” was “downright corrupt politically.” He “traded political power for interests and distorted his power into a tool to seek political capital, personal benefits, and wealth,” the reports said.

Liu was found to have “engaged in superstitious activities” and accepted invitations to golf games, banquets, tours, and medical services from private business people “that may compromise his impartiality in the performance of official duties,” the reports said.

In Sun’s case, a former justice minister and a former ruling party official who were accused of colluding with him received similar penalties. Sun was convicted of collecting 646 million yuan ($91 million) in bribes and charged with using his official position in 2018 to manipulate stock trading to help a trader avoid losses. He also was accused of selling official jobs and abandoning his post during the COVID-19 outbreak.

Earlier, Sun was named in a lawsuit by the U.S. Justice Department against Las Vegas casino mogul Steve Wynn seeking to compel Wynn to register as a foreign agent. The department cited lobbying work it says Wynn performed for the Chinese government.

The lawsuit says senior officials including Sun wanted Wynn’s help in trying to have a Chinese citizen’s visa application denied, according to the complaint. Beijing wanted the man, who was charged with corruption and sought political asylum, returned to China.

Xi launched his anti-graft campaign shortly after taking over as party leader in late 2012. It has at times been seen as a tool to remove political rivals and intimidate the vast bureaucracy into doing his bidding. It also has sometimes sparked a public backlash, as in the case of the rigid enforcement of zero-COVID restrictions that have hobbled the economy and upended the lives of millions.

At the party congress, Xi is expected to try to break with tradition and award himself a third five-year term as leader.

Whoever coined the expression that patience is a virtue probably never invested money in the equity markets. It can be excruciating to see a stock’s price plummet. And that’s particularly true when the stock was possibly at all-time highs just one year ago.

Here’s the good news. In some cases, the reasons you liked the stock still exist. If that’s true, then there’s reason to believe that the stock price may recover.

The bad news is there’s no way to know for sure when that will be. And anyone who says they do is not telling you the truth.

So what’s an investor to do? We believe the answer is to be selective. And right now that means looking at best-in-class stocks that are built to ride out recessions.

In this special presentation, we’ll give you seven stocks to consider as you look for safe stocks that give you an opportunity for growth and that pay a dividend for good measure. Here are the 7 recession-proof stocks that will let you wait out this bear market.

View the “10 Recession-Proof Stocks That Will Let You Wait Out the Bear”.