Sheriff’s deputies recover the remains of a victim of the Camp Fire in Paradise, Calif., Nov. 10, 2018. Former executives and directors of Pacific Gas & Electric have agreed to pay $117 million to settle a lawsuit over devastating 2017 and 2018 California wildfires sparked by the utility’s equipment, it was announced Thursday, Sept. 29, 2022. (AP Photo/Noah Berger, File) 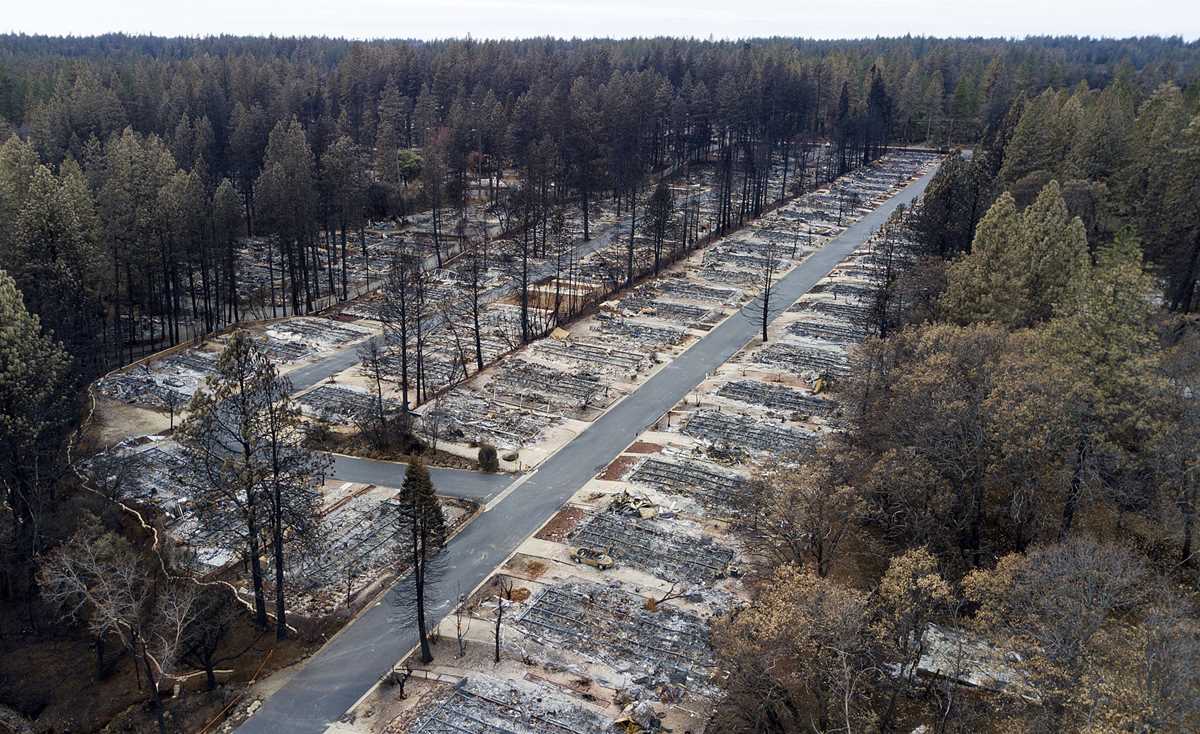 Charred footprints of homes leveled by the Camp Fire line the streets at the Ridgewood Mobile Home Park retirement community in Paradise, Calif., Dec. 3, 2018. Former executives and directors of Pacific Gas & Electric have agreed to pay $117 million to settle a lawsuit over devastating 2017 and 2018 California wildfires sparked by the utility’s equipment, it was announced Thursday, Sept. 29, 2022. (AP Photo/Noah Berger, File) 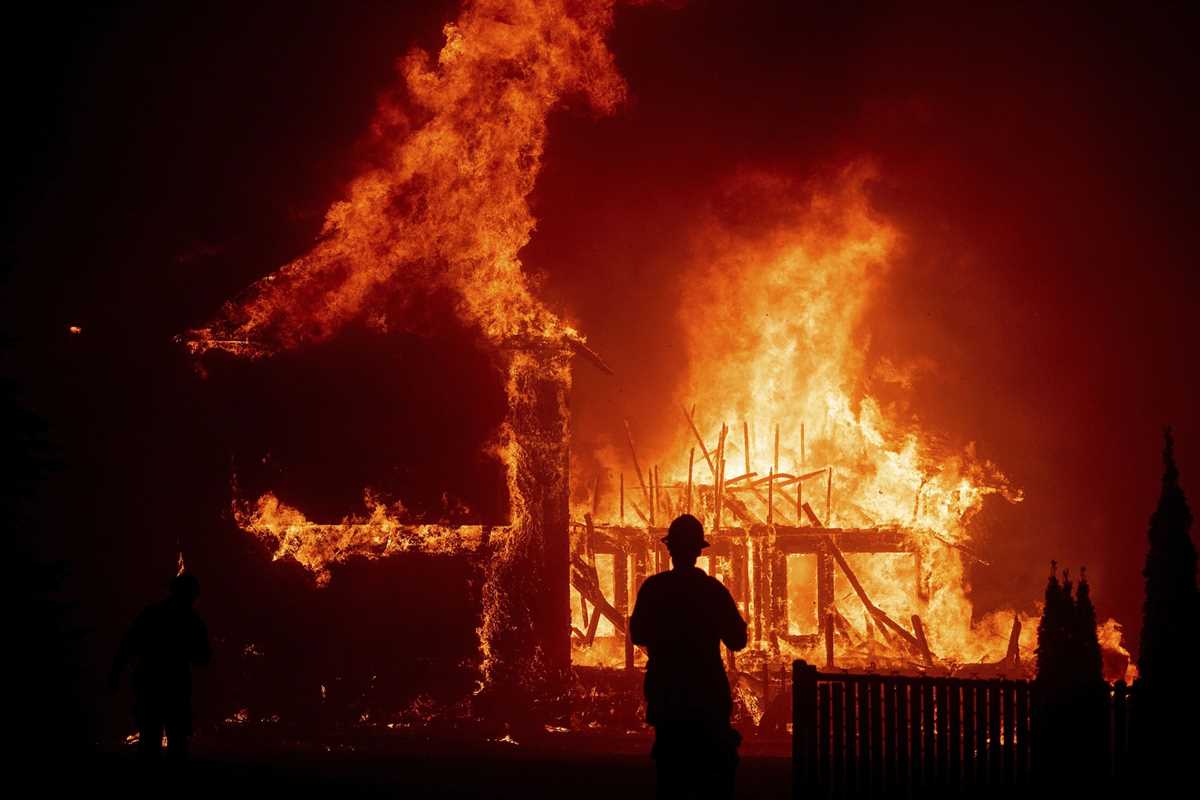 A home burns as the Camp Fire rages through Paradise, Calif., Nov. 8, 2018. Former executives and directors of Pacific Gas & Electric have agreed to pay $117 million to settle a lawsuit over devastating 2017 and 2018 California wildfires sparked by the utility’s equipment, it was announced Thursday, Sept. 29, 2022. (AP Photo/Noah Berger, File)

OAKLAND, Calif. (AP) — Former executives and directors of Pacific Gas & Electric have agreed to pay $117 million to settle a lawsuit over devastating 2017 and 2018 California wildfires sparked by the utility’s equipment, it was announced Thursday.

The settlement was announced by the PG&E Fire Victim Trust, which was established to handle claims filed by more than 80,000 victims of deadly wildfires ignited by PG&E’s rickety electrical grid. The trust’s lawsuit, filed last year, alleged that former officers and board members neglected their duty to ensure the utility’s equipment wouldn’t kill people.

The complaint was an offshoot of a $13.5 billion settlement that PG&E reached with the wildfire victims while the utility was mired in bankruptcy from January 2019 through June 2020.

As part of that deal, PG&E granted the victims the right to go after the utility’s hierarchy leading up to and during a series of wind-driven wildfires that killed more than 100 people and destroyed more than 25,000 homes and businesses, including the 2018 Camp Fire, which killed 85 people and destroyed much of the town of Paradise in Butte County.

PG&E pleaded guilty to 84 felony counts of involuntary manslaughter for causing the fire and was fined $4 million, the maximum penalty allowed.

All told, PG&E has been blamed for more than 30 wildfires since 2017 that wiped out more than 23,000 homes and businesses and killed more than 100 people.

Those sued by the fire trust included two of PG&E’s former chief executives, Anthony Earley and Geisha Williams, who were paid millions of dollars during their terms, and former board members. They were covered by liability insurance secured by the utility, the trust has said.

PG&E is the nation’s largest utility, with an estimated 16 million customers in central and Northern California.

In a statement, PG&E said the settlement is “another step forward in PG&E’s ongoing effort to resolve issues outstanding from before its bankruptcy and to move forward focused on our commitments to deliver safe, clean and reliable energy to our customers, and to continue the important work of reducing risk across our energy system.”

The settlement money won’t go to fire victims. Instead, under a bankruptcy court order, the money will be used to satisfy “the vast majority” of claims made by federal agencies, such as the U.S. Forest Service, that helped fight the blazes and assist the victims, said a statement from Frank M. Pitre, lead attorney for the trust.

That means the money won’t have to come out of funds earmarked for the trust, which has paid out $4.9 billion to victims.

The trust has said it faces a huge shortfall because half of the promised settlement consisted of PG&E stock that has consistently traded at less than what was hoped for when the deal was struck toward the end of 2019.

The stock closed Thursday at $12.38 a share on the New York Stock Exchange, down more than 30 cents.

Would-be investors might be spooked by PG&E’s continuing wildfire woes. In June, the company pleaded not guilty to involuntary manslaughter and other charges it faces after its equipment sparked the Zogg Fire, which killed four people and destroyed hundreds of homes in Northern California two years ago.

Also earlier this year, PG&E agreed to pay more than $55 million to avoid criminal prosecution for two other major wildfires sparked by its aging Northern California power lines. But the company didn’t acknowledge wrongdoing in those cases.

And last week, federal investigators seized a utility transmission pole and attached equipment in a criminal probe into what started the Mosquito Fire in the Sierra Nevada foothills.

The fire that broke out on Sept. 6 destroyed nearly 80 homes and other buildings. The fire, which has burned nearly 120 square miles (311 square kilometers), was 85% contained Thursday.

Whoever coined the expression that patience is a virtue probably never invested money in the equity markets. It can be excruciating to see a stock’s price plummet. And that’s particularly true when the stock was possibly at all-time highs just one year ago.

Here’s the good news. In some cases, the reasons you liked the stock still exist. If that’s true, then there’s reason to believe that the stock price may recover.

The bad news is there’s no way to know for sure when that will be. And anyone who says they do is not telling you the truth.

So what’s an investor to do? We believe the answer is to be selective. And right now that means looking at best-in-class stocks that are built to ride out recessions.

In this special presentation, we’ll give you seven stocks to consider as you look for safe stocks that give you an opportunity for growth and that pay a dividend for good measure. Here are the 7 recession-proof stocks that will let you wait out this bear market.

View the “10 Recession-Proof Stocks That Will Let You Wait Out the Bear”.