Europe tells tourists: Welcome back! Now work out the rules

In htis Wednesday, June 9, 2021 file photo, visitors gather during a presentation visit of the “Grand Palais Ephemere”, with the Eiffel Tower in the background, in Paris. Europe is opening up to Americans and other visitors after more than a year of COVID-induced restrictions. European governments hope to lure back tourists – and their dollars – back to the continent’s trattorias, vistas and cultural treasures. (AP Photo/Francois Mori, File) 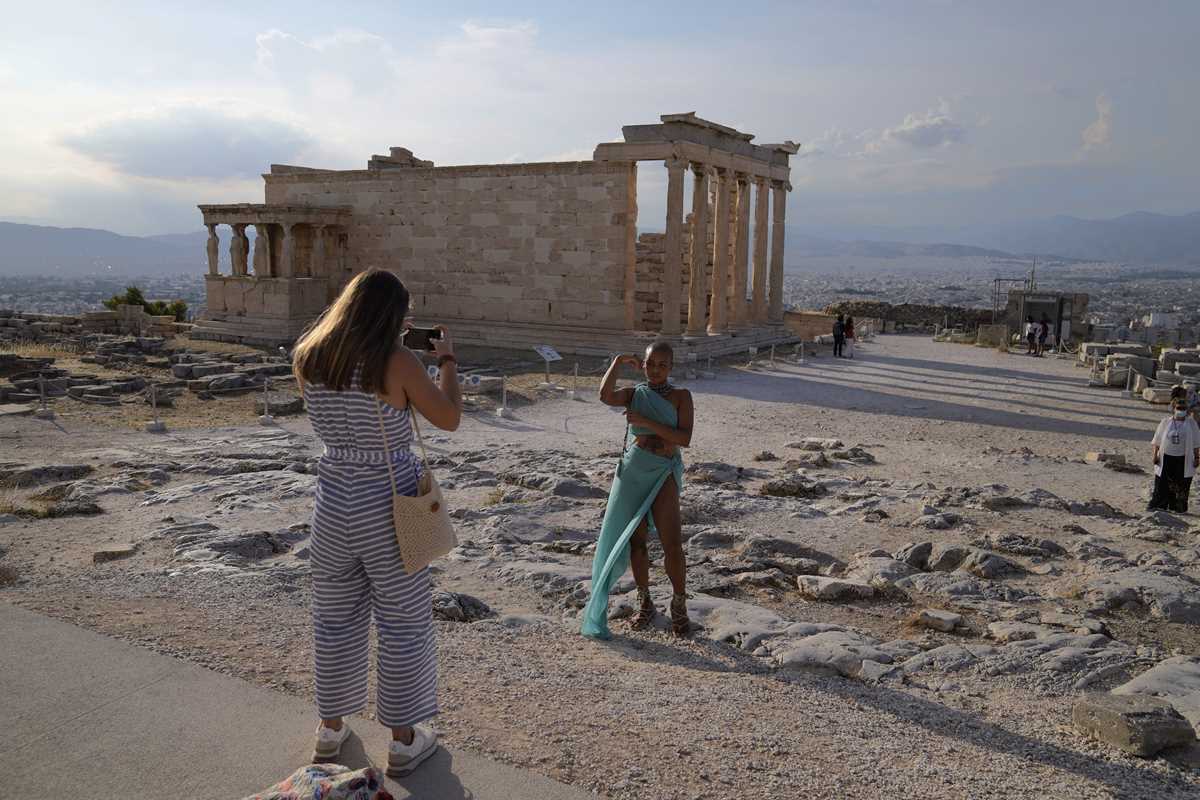 In this Tuesday, June 8, 2021 file photo, a tourist take photos at the Parthenon temple during a media tour for the Foreign Correspondents organised by the Greek Cultural Ministry at the Acropolis hill in Athens. Europe is opening up to Americans and other visitors after more than a year of COVID-induced restrictions. European governments hope to lure back tourists – and their dollars – back to the continent’s trattorias, vistas and cultural treasures. (AP Photo/Thanassis Stavrakis, File) 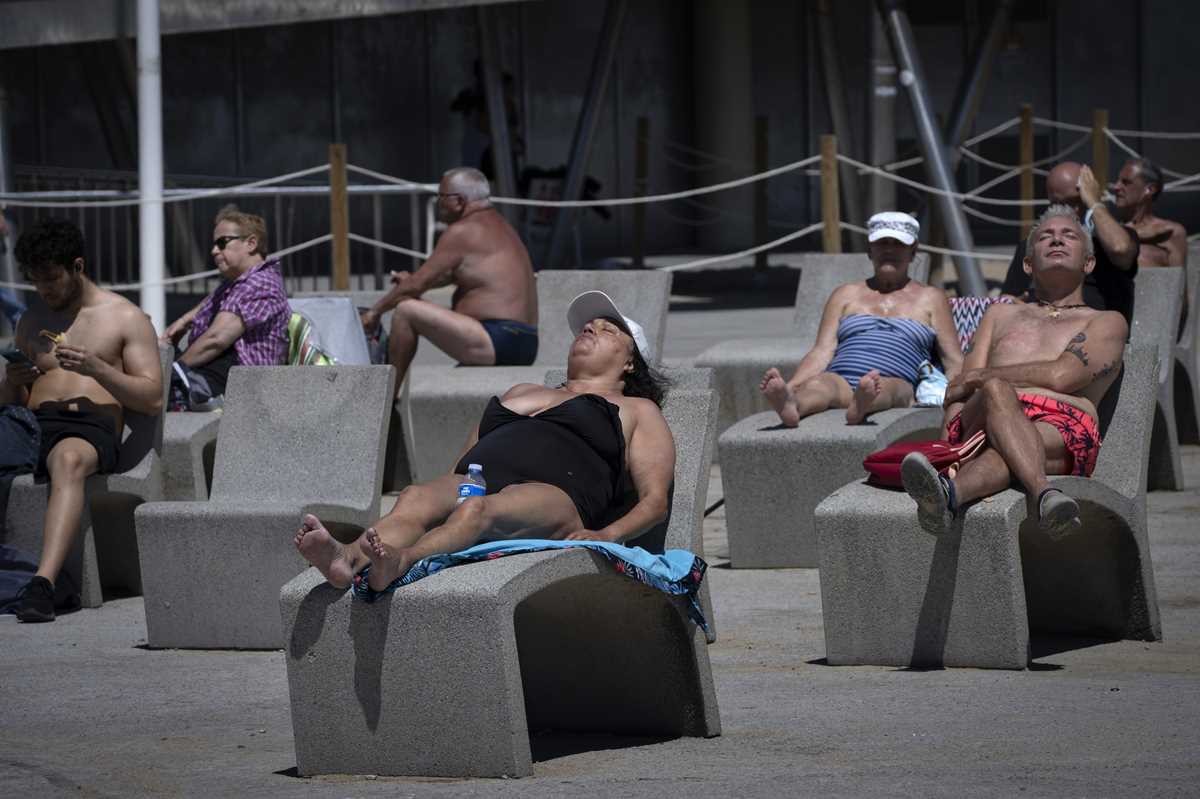 In this Tuesday, June 8, 2021 file photo, people sunbathe near the beach in Barcelona, Spain. Europe is opening up to Americans and other visitors after more than a year of COVID-induced restrictions. European governments hope to lure back tourists – and their dollars – back to the continent’s trattorias, vistas and cultural treasures. (AP Photo/Emilio Morenatti, File) 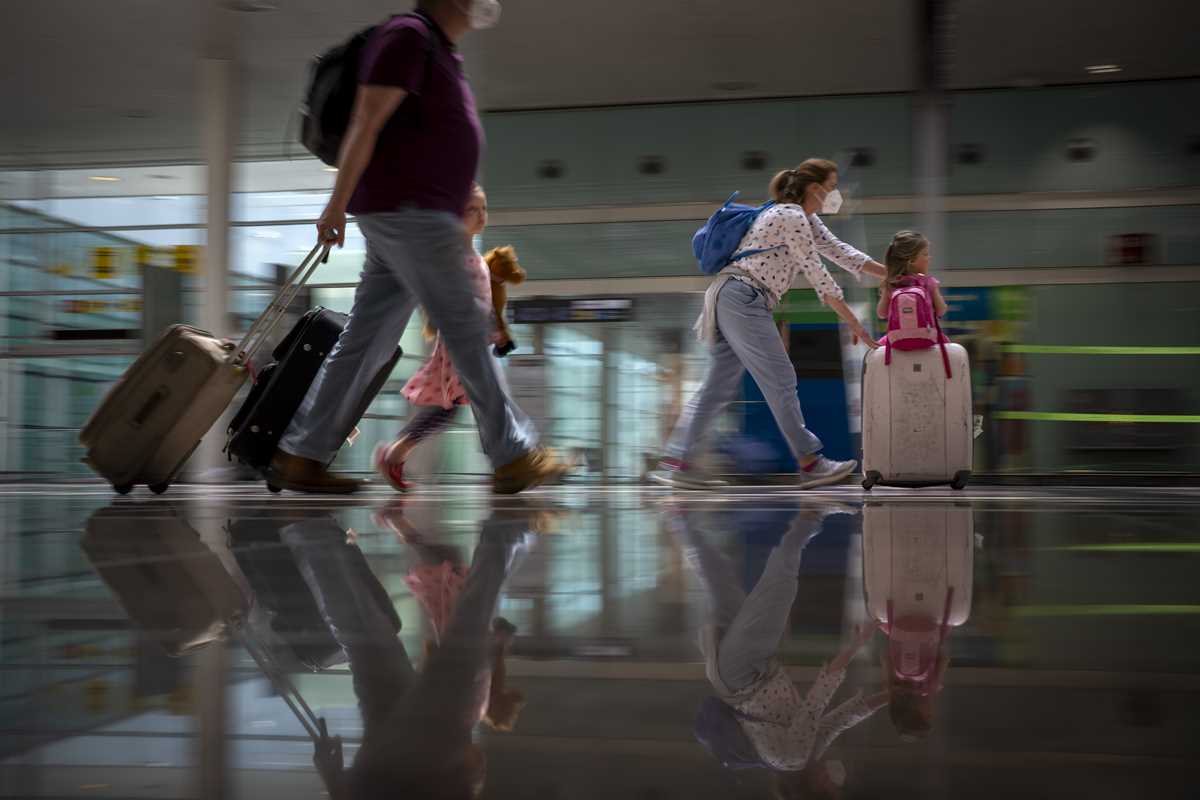 In this Monday, June 7, 2021 file photo, tourists arrive at Barcelona airport, Spain. Europe is opening up to Americans and other visitors after more than a year of COVID-induced restrictions. European governments hope to lure back tourists – and their dollars – back to the continent’s trattorias, vistas and cultural treasures. (AP Photo/Emilio Morenatti, File) 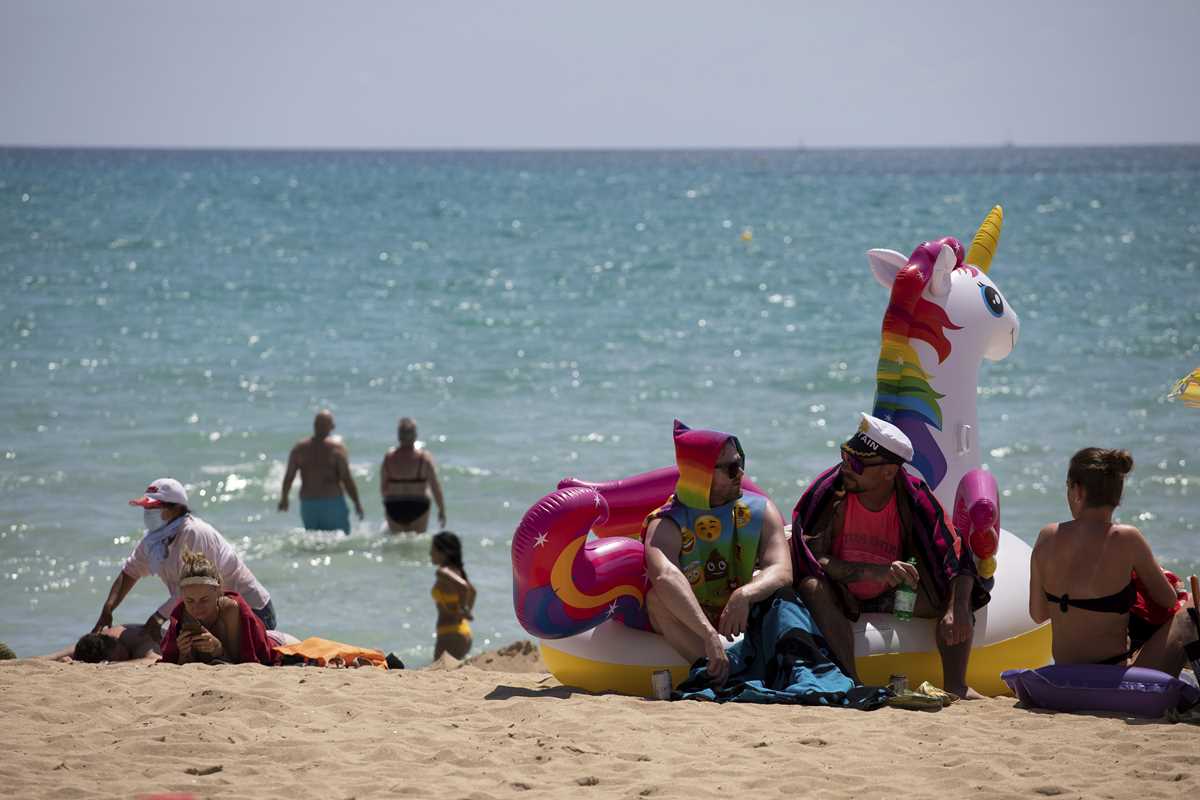 In this Monday, June 7, 2021 file photo, tourists sunbathe on the beach at the Spanish Balearic Island of Mallorca, Spain. Europe is opening up to Americans and other visitors after more than a year of COVID-induced restrictions. European governments hope to lure back tourists – and their dollars – back to the continent’s trattorias, vistas and cultural treasures. (AP Photo/Francisco Ubilla, FIle)

PARIS (AP) — Europe is opening up to Americans and other visitors after more than a year of COVID-induced restrictions, in hope of luring back tourists — and their dollars — to the continent’s trattorias, vistas and cultural treasures. But travelers will need patience to figure out who’s allowed into which country, how and when.

As the European Union’s doors reopen one by one to the outside world for the first time since March 2020, tourists will discover a patchwork of systems instead of a single border-free leisure zone, because national governments have resisted surrendering control over their frontiers amid the pandemic. And post-Brexit Britain is going its own way altogether.

Here’s a look at current entry rules in some popular European tourist destinations. One caveat: While these are the regulations as written by governments, travelers may meet hiccups as airlines or railway officials try to make sense of them.

If you’re vaccinated, come to France. But only if you got one of the four EU-approved vaccines: Pfizer, AstraZeneca, Moderna or Johnson & Johnson. That works for Americans — as long as they can produce official proof of vaccination — but not for large swaths of the world like China and Russia where other vaccines are used.

France’s borders officially reopened Wednesday. Vaccinated visitors from outside Europe and a few “green” countries will still be asked for a negative PCR test no older than 72 hours, or a negative antigen test of no more than 48 hours. Unvaccinated children will be allowed in with vaccinated adults, but will have to show a negative test from age 11.

Tourists are banned from 16 countries wrestling with virus surges and worrisome variants that are on a red list that includes India, South Africa and Brazil.

The Electric Vehicle boom is here! This upstart lithium developer is positioning to be a future supplier to Tesla’s Gigafactory in the Nevada desert. Best of all, it’s currently undiscovered by Wall Street below US$1 per share.

Non-vaccinated visitors from “orange list” countries — including the U.S. and Britain — can’t come for tourism either, only for specific, imperative reasons.

Americans — the second-biggest group of foreign tourists to Italy — have been welcome since mid-May. However, they need to self-isolate upon arrival for 10 days unless they arrive on so-called “COVID-tested flights.” That means passengers are tested before and after the flight and must fill out documents about their whereabouts to facilitate contact tracing if required.

“COVID-tested” flights from the U.S. started in December and have also been operating since May from Canada, Japan and the United Arab Emirates.

Italy also started allowing tourists from Britain and Israel last month, meaning they no longer need an “essential” reason to visit and don’t have to self-isolate, providing they present proof of a negative COVID test taken no more than 48 hours prior to arrival.

The same rules apply to travelers from EU countries and those on “COVID-tested” flights from the U.S., Canada, Japan and the United Arab Emirates.

Tourism-reliant Greece started opening to American travelers back in April, and now visitors from China, Britain and 20 other countries are also allowed to visit for nonessential travel.

All must provide a vaccination certificate or a negative PCR test and fill in a passenger locator form on their plans in Greece. This directive expires on June 14, but could be extended.

Athens long pressed for a common EU approach, but didn’t wait for one to materialize. On June 1, Greece, Germany and five other bloc members introduced a COVID certificate system for travelers, weeks ahead of the July 1 rollout of the program across the 27-nation bloc.

Spain kicked off its summer tourism season Monday by welcoming vaccinated visitors from the U.S. and most countries, as well as European visitors who can prove they are not infected.

Americans and most other non-Europeans need an official vaccine certificate by a U.S. health authority, in English. Spain accepts those who were inoculated with the four EU-approved vaccines as well two Chinese vaccines authorized by the World Health Organization — as long as visitors are fully vaccinated at least two weeks before the trip.

Arrivals from Brazil, South Africa and India are banned at the moment because of high infection rates there, and non-vaccinated Americans and many other non-EU nationalities cannot come to Spain for tourism for now.

But there are exemptions for countries considered at low risk, such as citizens from Britain, who can arrive without any health documents at all. EU citizens need to provide proof of vaccination, a certificate showing they recently recovered from COVID-19, or a negative antigen or PCR test taken within 48 hours of arrival.

There are few, if any, American tourists in the U.K. at present. Britain has a traffic-light system for assessing countries by risk, and the U.S. along with most European nations is on the “amber” list, meaning everyone arriving has to self-isolate at home or in the place they are staying for 10 days.

U.K. and U.S. airlines and airport operators are pushing for a travel corridor to allow tourism to resume, and Prime Minister Boris Johnson is expected to raise the issue when he meets President Joe Biden at a G-7 summit in England this week.

Meanwhile, anyone traveling between Britain and continental Europe, be warned: In addition to the isolation requirement for those arriving or returning to U.K. shores, rising concern about the delta variant of the virus has prompted some other countries to introduce special restrictions for those arriving from Britain.

The 27-nation EU has no unified COVID tourism or border policy, but has been working for months on a joint digital travel certificate for those vaccinated, freshly tested, or recently recovered from the virus. EU lawmakers endorsed the plan Wednesday.

The free certificates, which will contain a QR code with advanced security features, will allow people to move between European countries without having to quarantine or undergo extra coronavirus tests upon arrival.

Several EU countries have already begun using the system, including Spain, Germany, Greece, Bulgaria, Croatia, the Czech Republic, Denmark and Poland. The rest are expected to start using it July 1.

It’s mainly meant for EU citizens but Americans and others can obtain the certificate too — if they can convince authorities in an EU country they’re entering that they qualify for one. And the lack of an official U.S. vaccination certification system may complicate matters.

Featured Article: What is a resistance level?

7 Lithium Stocks That Will Power the Electric Vehicle Boom

Demand for lithium is set to increase exponentially in the next few years. In fact, according to Statista, demand for lithium may very well double to 820,000 tons in that time. Some of that demand will come from companies that are manufacturing the batteries that we use every day. For example, lithium is an essential component of the batteries that power our mobile devices.

But the real growth will come as the United States goes all-in on electric vehicles (EVs). The Biden administration recently announced plans to have the U.S. government’s fleet of over 600,000 vehicles converted to EVs.

And as you’re aware, EV stocks are in a bubble of some sort at the moment. Some of that is due to the increasing number of companies that went public last year. However, as investors are beginning to realize, not all of these companies will be the next Tesla. In fact, some of these companies may never be successful at bringing an EV to market, at least not at the scale that will be required.

The ones that do make it will need lithium and lots of it. To help you sift through the best lithium stocks to buy, we’ve put together this special presentation.

View the “7 Lithium Stocks That Will Power the Electric Vehicle Boom”.

NZD/CHF Down 2 Pips in Last Hour, Makes Big Move Relative to Past Two Months; Entered Today Up For the 2nd Day In A Row

Stellar (XLM) Price Near $0.31; in a Downtrend Over Past 14 Days, Moves Down For the 4th Straight Day, Pin Bar Pattern Appearing on Chart