In this Tuesday, Dec. 10, 2019 file photo commuters wait in traffic during the morning rush hour in Brussels. The European Union on Thursday, July 8, 2021 has fined four major German car manufacturers one 1 billion US dollars in fines because they colluded to limit the development and roll-out of car emission control systems. (AP Photo/Francisco Seco, File) 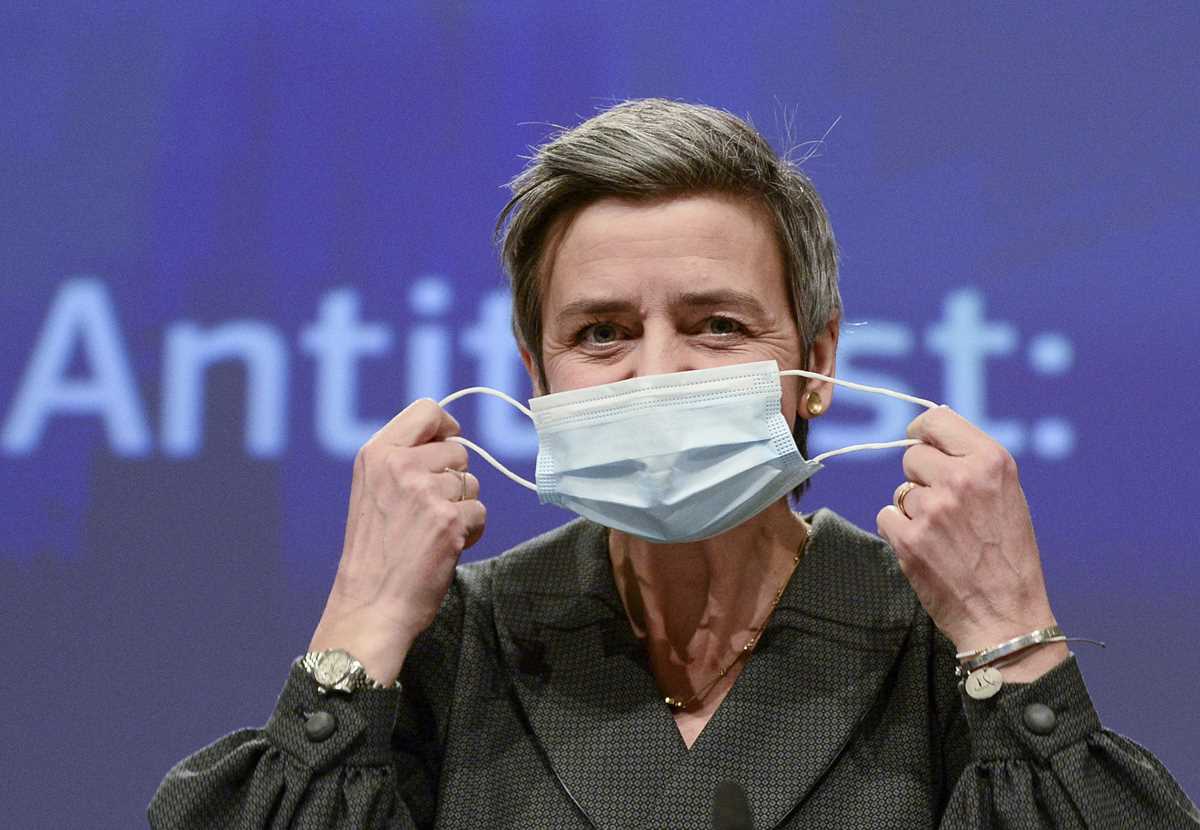 In this Wednesday, Feb. 10, 2021 file photo, European Commissioner for Europe fit for the Digital Age Margrethe Vestager adjusts her protective face mask during a media conference on an anti-trust case at EU headquarters in Brussels. The European Union on Thursday, July 8, 2021 has fined four major German car manufacturers one 1 billion US dollars in fines because they colluded to limit the development and roll-out of car emission control systems. (Johanna Geron, Pool Photo via AP, File)

BRUSSELS (AP) — The European Union on Thursday handed down $1 billion in fines to four major German car manufacturers, saying they colluded to limit the development and rollout of car emission control systems.

Daimler wasn’t fined after it revealed the cartel to the European Commission.

EU antitrust chief Margrethe Vestager said that even though the companies had the technology to cut cut harmful emissions beyond legal limits, they avoided to compete and denied consumers the chance to buy less polluting cars.

“Factories compete with one another also when it comes to reducing carbon emissions from the cars,” Vestager said. “Manufacturers deliberately avoided to compete on cleaning better than what was required by EU emission standards. And they did so despite the relevant technology being available.” It made their practice illegal, Vestager said.

The case wasn’t directly linked to the “dieselgate” scandal of the past decade, when Volkswagen admitted that about 11 million diesel vehicles worldwide were fitted with the deceptive software, which reduced nitrogen oxide emissions when the cars were placed on a test machine but allowed higher emissions and improved engine performance during normal driving.

The scandal cost Wolfsburg, Germany-based Volkswagen 30 billion euros ($35 billion) in fines and civil settlements and led to the recall of millions of vehicles.

It was the first time the European Commission imposed collusion fines on holding back the use of technical developments, not a more traditional practice like price fixing.

7 Electric Vehicle (EV) Stocks That Are Ready to Rebound

The electric vehicle (EV) sector was nearly as frothy as the “pandemic stocks” in 2020. It wasn’t that the EV sector was dormant during the Trump administration.

But, as the saying goes, elections have consequences. And Wall Street understands they can make money in any administration. And as a bet that Joe Biden would win the presidency, electric vehicle stocks soared.

For starters, the Biden administration has already said it will prioritize climate change like no administration ever has. And one way they are going to do that is to incentivize the production and purchase of electric vehicles.

And to take advantage of this shift towards electric vehicle stocks, many private companies raced to get in on the action. The preferred way for many of these companies to go public was via a Special Purpose Acquisition Company (SPAC). A SPAC is basically a shortcut to the traditional IPO process.

However, what goes up frequently goes down and since late February, EV stocks have been getting battered. But this is creating an opportunity because the electric vehicle is still supposed to see exceptional growth over the next five years.

To help you take advantage of this we’ve created this special presentation that includes seven stocks that appear to be ready to take the next leg up.

View the “7 Electric Vehicle (EV) Stocks That Are Ready to Rebound “.