Ethereum price is trading marginally above $1,300 after its bullish shoots were slashed at $1,400 on Tuesday. The presence of immense buyer congestion at $1,255 cut short the pullback that may very well have tagged $1,200. However, recovery to $2,000 could remain a pipe dream in the near term due to dwindling buyer interest.

Ethereum price has, since its Merge software upgrade, struggled to hold key support areas. Bullish trend reversals have also been elusive, but on-chain data from Santiment establishes that large volume investors have been busy emptying their wallets.

Odds may continue playing against Ethereum price recovery as long as whales keep selling. In other words, Ethereum price is yet to tap its final floor price to ignite a sustainable uptrend in the short term.

Rekt Capital, a renowned analyst, told his followers via Twitter that although Ethereum price may have respected its support at $1,300, waning buy interest is unlikely to sponsor a significant move north.

Compared to early 2021, the reaction from the same support was much more volatile, forming a downside wick. The analyst forecasts downside continuation to $1,100 if a new weekly candle closes below $1,300.

A new Weekly Candle Close below orange could set #ETH for downside continuation into at least the black ~$1100 #Crypto #Ethereum pic.twitter.com/fit5QSdQJc

A rectangle pattern formed on the four-hour chart reveals a choppy market. Ethereum price will likely trend sideways within the rectangle until a breakout occurs on either side (up or down). For now, the odds are in favor of the bears, especially with the Moving Average Convergence Divergence (MACD) crossing below the mean line into the negative region. Furthermore, its negative divergence from the price upholds this pessimistic analysis. 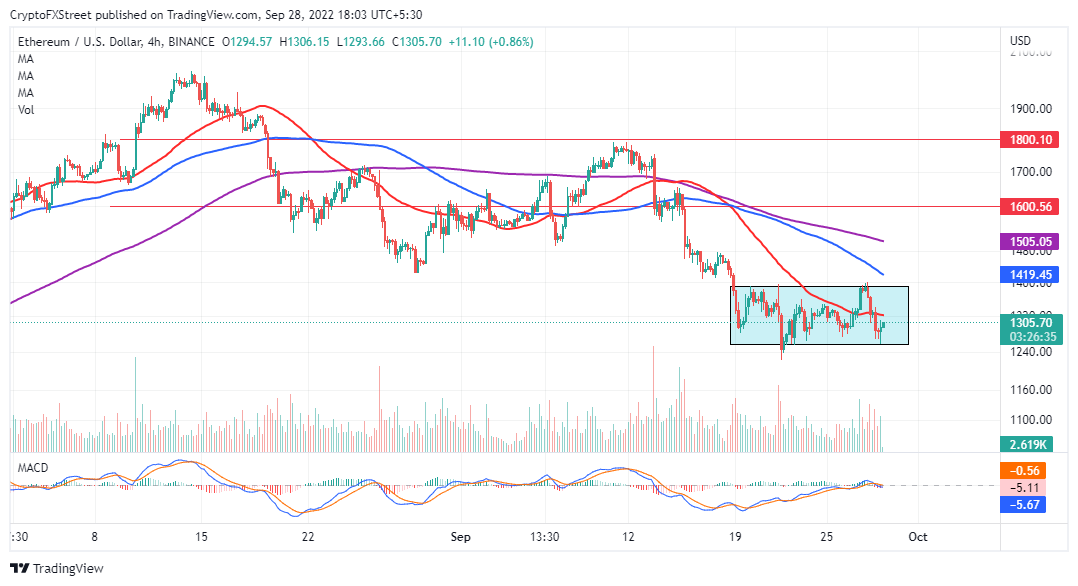 If support at $1,300 remains intact, Ethereum price could start reaching out for a bullish breakout. Still, the 50-day SMA (Simple Moving Average – red) may continue limiting price action at $1,323. On the downside, Ethereum price will make good of the forecast to $1,100 if bears crack the support areas at $1,300 and $1,200, respectively.