American stocks dipped sharply on Thursday as investors reacted to strong American inflation data. According to the Bureau of Labor Statistics, the country’s headline inflation jumped to 7.9% in February and there is a likelihood that the trend will continue. Excluding food and energy, inflation rose to 6.4%, which was the highest level in decades. With a war going on in Ukraine, there is a likelihood that the price of most items will keep rising. That’s because Russia is one of the biggest producers of food, fertilizer, and other commodities. Therefore, analysts expect that the Fed will continue tightening its policies in the near term.

The euro erased earlier gains during the American session as Christine Lagarde held a press conference. In its monetary policy decision, the bank left its key rates unchanged, where they have been in the past two years. It also surprised the market by winding down its asset purchases program at a faster pace than planned. It will end its QE program in the third quarter depending on economic data. Still, there are concerns about the health of the bloc’s economy now that the cost of everything is going up. For example, there are risks of a European energy crisis now that Russia has threatened to cut supplies.

The economic calendar will be a bit busy today. In the morning session, the Office of National Statistics (ONS) will publish the final reading of the fourth-quarter GDP data. While these numbers are important, they will not have a major impact on sterling because they tend to be in line with the second estimate. Analysts expect the data to show that the economy expanded by 9.3% in Q4. Germany will publish its inflation data while the Turkish statistics agency will deliver the latest retail sales numbers. In the afternoon session, Statistics Canada will publish February jobs numbers.

The EURUSD pair initially rose after the ECB delivered its interest rate decision. It then rebounded as Christine Lagarde delivered her press conference. It is trading at 1.100, which is lower than the intraday high of 1.1120. On the four-hour chart, shares have moved below the 38.2% Fibonacci retracement level. It has also moved below the 25-day and 50-day moving averages while the Relative Strength Index has retreated. Therefore, there is a likelihood that the pair will continue falling in the near term.

The GBPUSD pair declined sharply ahead of the latest UK GDP data. It moved to a low of 1.3110, which was slightly below Thursday’s high of 1.3200. It has moved below the bearish flag pattern and dropped below the 25-day moving averages. The MACD has moved below the neutral level while the Commodity Channel Index (CCI) has moved below the overbought level. Therefore, the pair will likely keep falling as bears target the next key support at 1.3050. 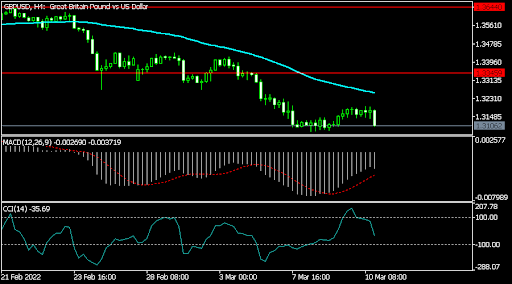 The EURGBP pair rose to 0.8435, which was the highest level since February 12. On the four-hour chart, the pair has moved between the middle and upper side of the Bollinger Bands. Its MACD has been rising while the William %R has moved to the overbought level. Therefore, there is a likelihood that the pair will keep rising. 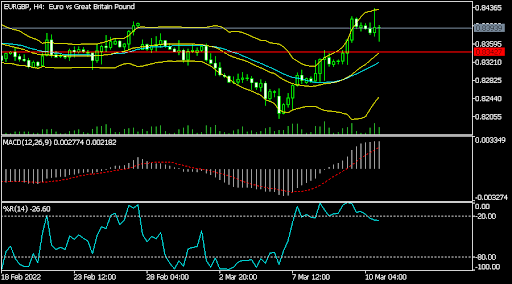