Bitcoin (BTC): The largest cryptocurrency by market value was recently trading at $23,000, up 0.4% in the past 24 hours. The total volume of bitcoin options on Deribit rose to $4.25 billion last week, the highest point since Sam Bankman-Fried’s FTX exchange went bust in the second week of November.

Equities closed mixed as traders continued processing the latest round of fourth-quarter earnings reports from companies including General Electric. The Dow Jones Industrial Average (DJIA) was up 0.31% while the S&P 500 and the tech-heavy Nasdaq Composite were down 0.07% and 0.27%, respectively.

BTC/ETH prices per CoinDesk Indices; gold is COMEX spot price. Prices as of about 4 p.m. ET

Binance, the world’s largest crypto exchange by trading volume, mistakenly kept collateral for some of the crypto assets it issues in the same wallet as funds belonging to its customers, Bloomberg reported Tuesday, citing an unidentified Binance spokesperson.

Ether (ETH): ETH slid 0.8% to recently trade at $1,615. Ether turned deflationary again, with nearly one-fourth of ETH burned stemming from non-fungible token trades over the past seven days, according to data from ultrasound.money.

Moving to on-chain data, remember the Wormhole network exploiter that stole 80,000 ETH last year? It reappeared this week. According to data from Etherscan, the exploiter swapped 95,360 ETH worth roughly $157 million on decentralized finance aggregator OpenOcean and then transacted smaller amounts of capital through several DeFi protocols Monday.

Axie Infinity (AXS), dYdX (DYDX) and Aptos (APT): AXS, DYDX and APT are recently showing signs of strength into token unlocks, which are normally perceived to be a bearish event. AXS token surged 40% in the lead-up to $64 million worth of previously locked tokens, while the DYDX token rose 64% to rally this month despite a token unlock coming on Feb. 2. APT followed a similar trend, up 262% this year.

Bitcoin and ether’s trading range has begun to narrow as the two largest cryptocurrencies by market capitalization look to establish new areas of support. Following last week’s 8% and 5% gains, BTC and ETH’s price movement has yet to exceed a percentage point over the past four days.

BTC rose 0.4% on Saturday, declined slightly on Sunday and inched upward 1% and .09%, respectively, over the first two days of this week. Ether has traveled similarly during the same period.

Bitcoin’s chart implies new support levels forming near $22,900. The volume profile visible range (VPVR) tool, shows increasing levels of activity and price agreement at this mark. Often these are called high volume nodes, and can indicate where the market sees an asset as fairly priced, at least for the moment. 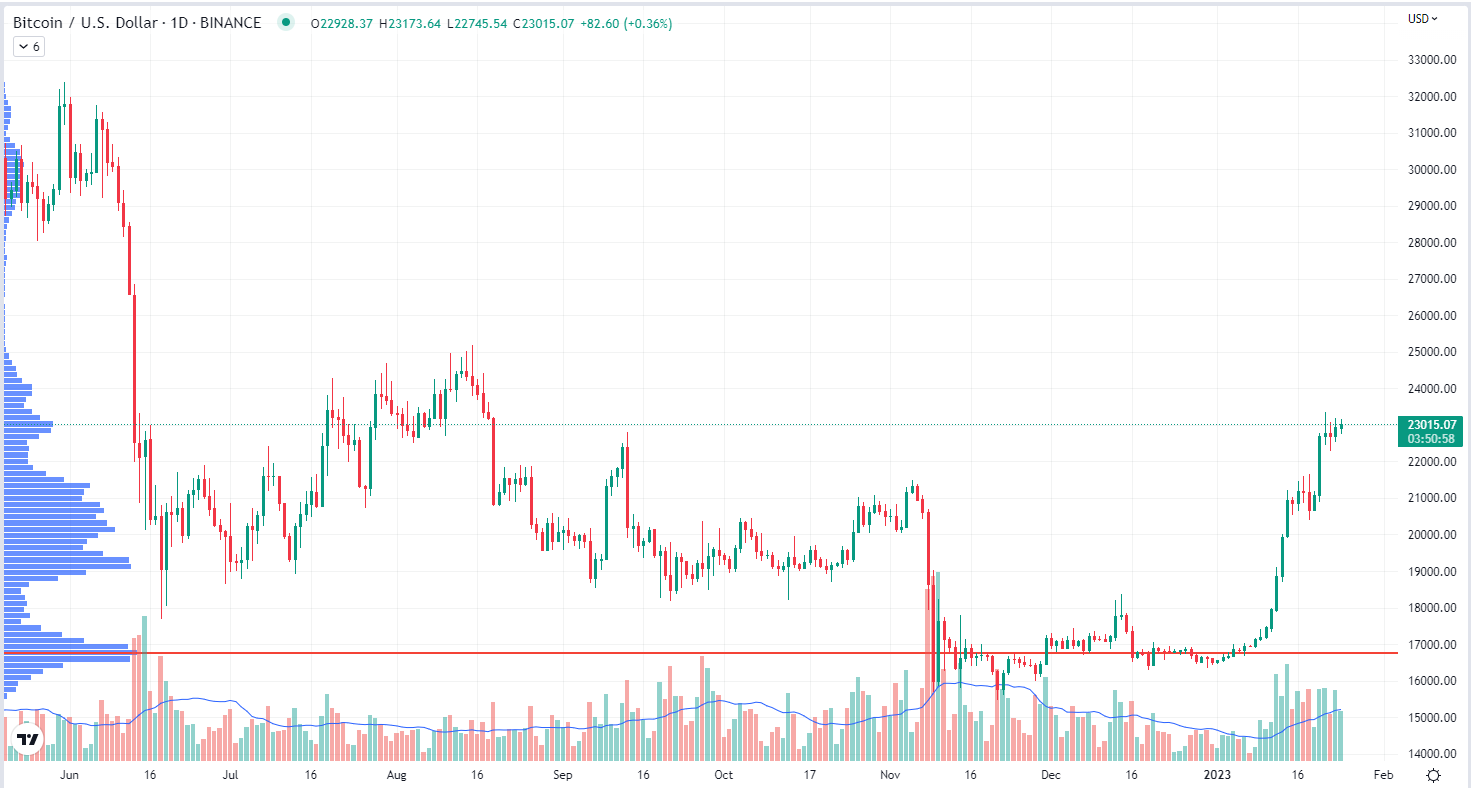