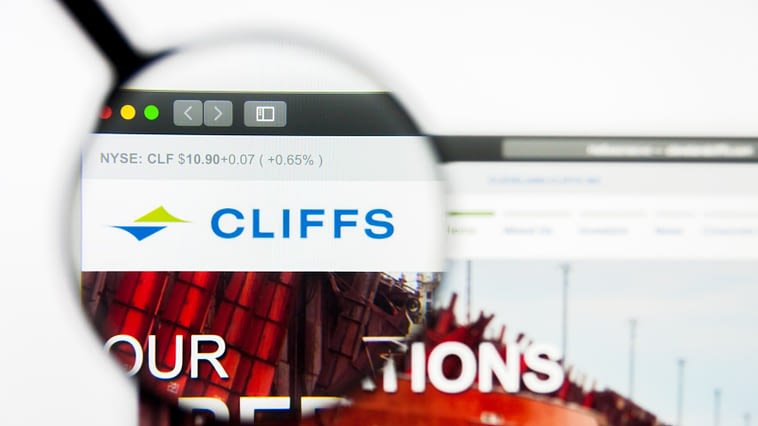 There’s no telling which stocks will turn into memes or momentum-driven growth trades in today’s market. When the Cleveland Iron Company was formed in 1847, I bet it wasn’t planning on being a momentum-trading stock 174 years into the future. That company eventually turned into Cleveland Cliffs (NYSE:CLF) and is today the largest producer of flat-rolled steel in North America.

The company is vertically integrated, starting from the mining process and continuing through iron making, steelmaking, rolling, finishing and downstream processes. Cleveland-Cliffs claims this self-sufficiency is a unique advantage in the industry, as most steel companies don’t have the same control over their process.

CLF Stock: 2020 Was a Busy Year for Acquisitions

In December 2020, Cleveland-Cliffs acquired the U.S. operations of ArcelorMittal for approximately $1.4 billion. Prior to the acquisition, ArcelorMittal U.S. had average annual revenues of $10.4 billion and adjusted EBITDA of $700 million.

However, despite the large-scale cost savings and synergies expected in these transactions, debt and liabilities increased substantially. By the end of 2020, Cleveland-Cliffs’ long-term debt increased to $5.4 billion from $2.1 billion at the start of the year.

More importantly, pension and healthcare liabilities increased dramatically to $4.1 billion from only $312 million in 2019. These types of long-term obligations are sometimes ignored by analysts and not treated as debt when they should be.

One of the benefits of these acquisitions was more diversity in its end-market customers and its product mix. Regarding the latter, the company offers products ranging from flat-rolled carbon steel and tinplate to hot and cold stamping and tooling.

CLF is often thought of as an infrastructure or auto play. However, its end customer mix is split more evenly. 36% are distributors and 29% are from the auto industry. Of the remainder, 25% are in infrastructure and manufacturing while 10% are from other sectors.

In the auto segment itself, about 80% of its steel products go to the fast-growing truck and sport utility vehicle (SUV) market. The remaining 20% are used in the sedan market.

The company is set to benefit in other areas as well. One of President Joe Biden’s administration’s hallmark bills is the $1 trillion bipartisan infrastructure bill.

This 2,700 page behemoth will provide $110 billion in new funds for roads, bridges and other related projects. The bill also includes $40 billion for bridge repair, replacement and rehabilitation.

This will obviously benefit CLF, as steel products such as plates pipes, tubes, rails and girders will be necessary to complete these massive infrastructure projects. However, despite the long-lived nature of some of these projects, this is still a temporary boost. The company will always need a strong economy to keep generating sustainable profits.

Watch Out for Insider Sales of CLF Stock

I would suspect most officers and directors of CLF likely know the very cyclical nature of the steel industry. This is a boom and bust industry historically littered with bankruptcies.

The company has done a great job de-leveraging the balance sheet and becoming a vertically-integrated producer. However, it still won’t be able to escape the scourge of low steel prices in the next down cycle.

The positive aspects of the CLF story are likely already priced into the stock. This is a variation of the “buy the rumor, sell the news” concept. Investors knew an infrastructure bill was coming and knew of high steel prices for quite some time. Now they need to guess what will happen six to 12 months from now.

You may be an adept trader and great at market timing, which will allow you to squeeze a few extra percentage points of gains out of CLF stock. But make no mistake, when the next economic recession hits, this stock will be down enough to create a permanent loss of capital.

On the date of publication, Tom Kerr did not hold a position in any security mentioned in the article. The opinions expressed in this article are those of the writer, subject to the biedexmarkets.com.com Publishing Guidelines.

Tom Kerr has worked in the financial services industry for over 25 years. Currently he is a Senior Portfolio Manager at Rocky Peak Capital Management. Prior to that he was Chief Investment Officer and Director of Research of SGL Investment Advisors, and has served in a number of positions at other finance-related organizations. Mr. Kerr has also been a contributing writer to TheStreet.com, RagingBull.com and biedexmarkets.com.com. He’s a CFA charterholder and obtained a B.B.A in Finance from Texas Tech University.