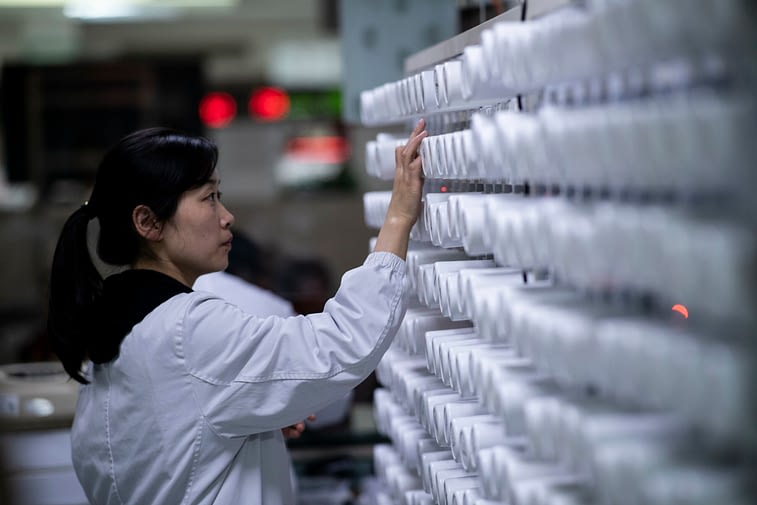 A woman sorting medicine in the pharmacy of the Yueyang Hospital, part of the Shanghai University of Traditional Chinese Medicine, in Shanghai.

China’s health-care sector will probably be the next to fall under scrutiny, analysts warn, as the country’s regulators crack down on everything from tech to education to data security.

Chinese President Xi Jinping this week again reiterated the need to support moderate wealth for all — or the idea of “common prosperity” which he has been promoting for months.

“‘Common prosperity’ remains an idea that is still in search of an implementation strategy,” said Rory Green, China economist at TS Lombard. “For now, it is much easier to regulate industry and capital markets than it is to institute structural reform.”

He predicted that alongside the property market, health care will be Beijing’s next target.

The health-care industry is one of the country’s so-called “three big mountains,” which refer to spiraling costs in the education, real estate and health sectors— all of which pose obstacles to affordable living.

Health care is the “only one not yet hit by regulatory scrutiny” and is “particularly vulnerable,” said Green in a Aug. 31 note.

The Chinese government previously pledged to keep prices in check, but efforts are now set to intensify, Capital Economics said in a Tuesday note.

“Public housing and healthcare is likely to be expanded while private medical providers and real estate developers could soon face greater constraints on their ability to set prices and pursue profits,” wrote Julian Evans-Pritchard, senior China economist at Capital Economics.

Chinese regulators have already stepped up restrictions on the country’s education sector and targeted the after-school tutoring segment worth billions of dollars.

China stocks could dive another 15%

China’s crackdown in the past year has been on a broad swathe of industries, from tech to education and food delivery.

That’s led to steep selloffs in Chinese stocks, wiping out billions of dollars from tech stocks in recent months.

So far this year, China’s health-care stocks have done better than the broader China indices.

MSCI’s China health-care index has declined marginally below the flatline year-to-date, compared to the MSCI China index which has tumbled more than 13%.

But some health-care stocks, especially businesses that use tech platforms, are already hurting. JD Health, for instance, has dropped almost 50% this year. Alibaba Health has tumbled more than 40% year-to-date.

Green said TS Lombard predicts the MSCI China index could dive another 10% to 15%, in a worst-case scenario.

He warned investors to be cautious, saying that political risk will remain elevated leading up to the Chinese Communist Party’s 20th National Party Congress next year.

“The political calendar is charged; and with cadres keen to bolster populist credentials in pursuit of promotion, political scrutiny of markets is likely to remain elevated – rather than taper off – in the coming months,” Green wrote.

What could be safer to buy? The so-called government favorites, said Green. They include relatively safe sectors such as tech hardware, clean energy, as well as defense.