Abbas Alawieh, chief of staff for Rep. Cori Bush, D-Mo., takes a drink of water after sitting on the steps of Capitol Hill in Washington on Tuesday, Aug. 3, 2021. Bush has been camped outside the U.S. Capitol in protest of the eviction moratorium lapse, since the weekend.(AP Photo/Amanda Andrade-Rhoades) 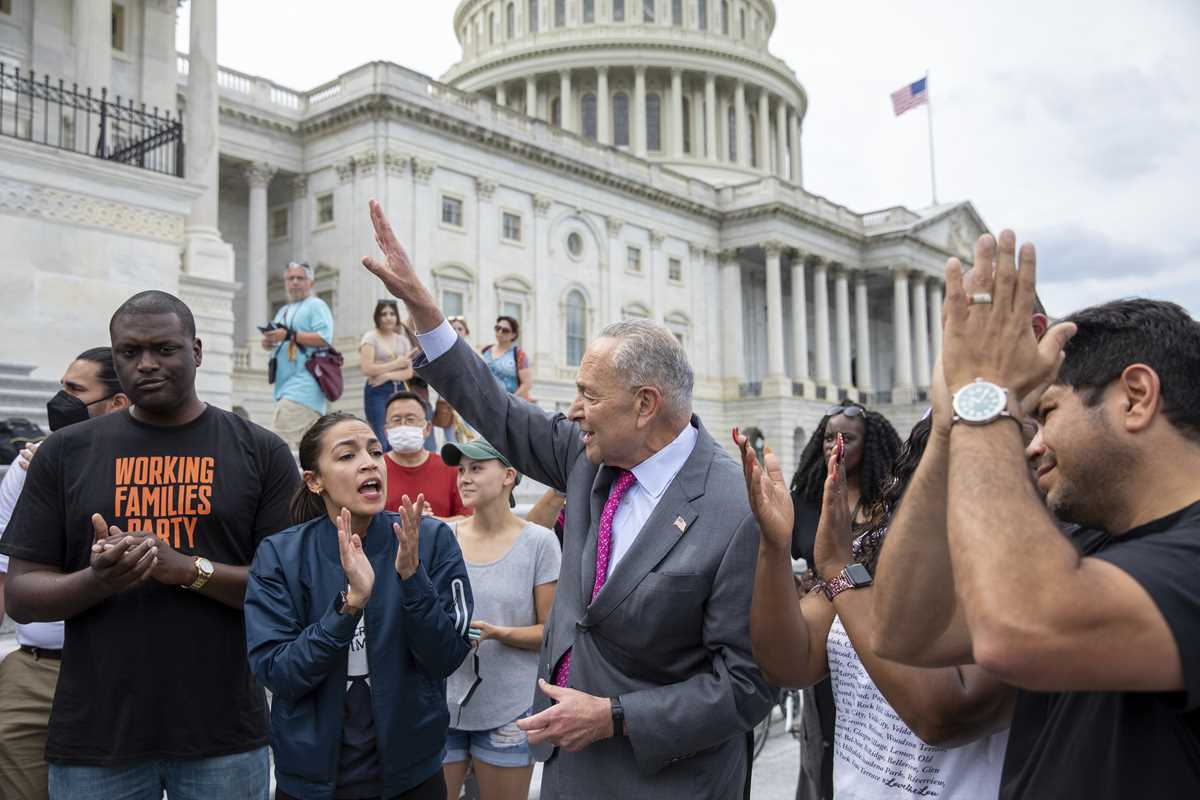 Rep. Cori Bush, D-Mo., second from left, sits with supporters advocating for reinstating the now-expired nationwide eviction moratorium sit outside of Capitol Hill in Washington on Tuesday, Aug. 3, 2021. Bush has been camped outside the U.S. Capitol in protest since the weekend. She was joined overnight Monday by Ocasio-Cortez, Rep. Jimmy Gonzalez, D-Calif., and others who gave her a brief reprieve so she could rest indoors. Bush also had a brief conversation Monday at the Capitol with Vice President Kamala Harris. (AP Photo/Amanda Andrade-Rhoades) 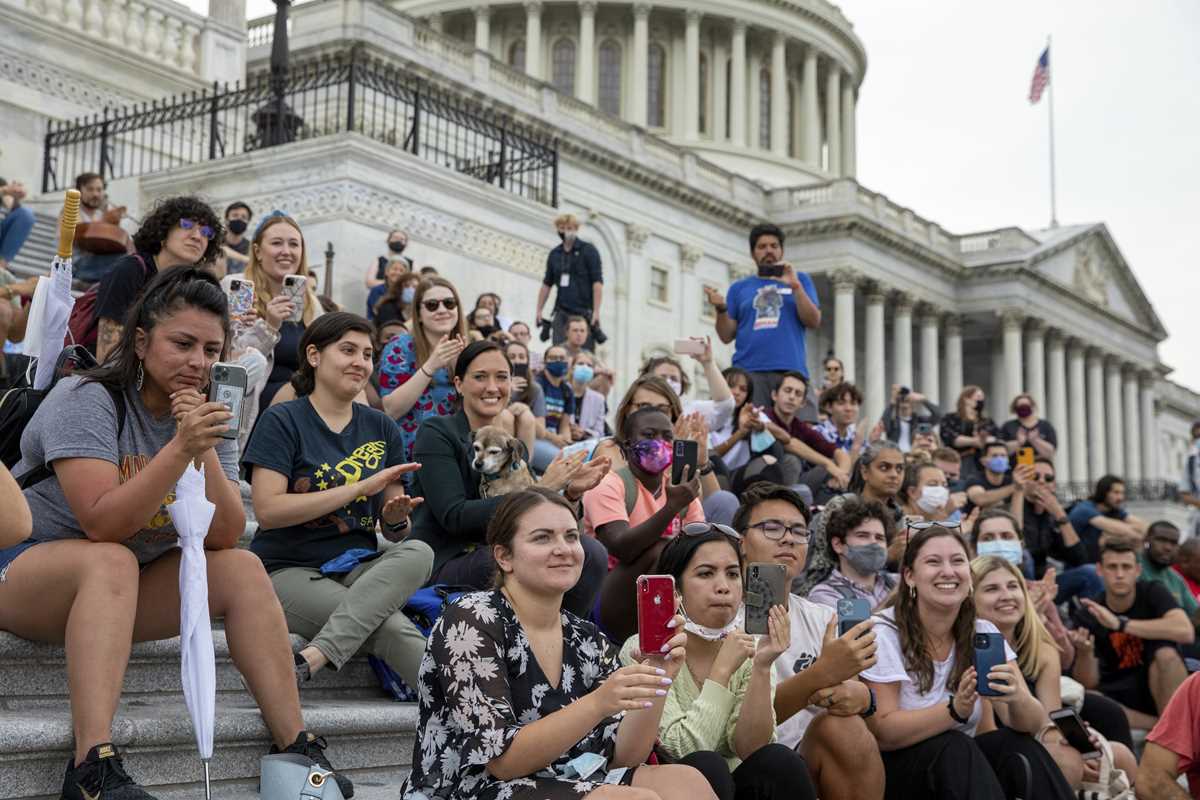 President Joe Biden answers a question from a reporter as he speaks about the coronavirus pandemic in the East Room of the White House in Washington, Tuesday, Aug. 3, 2021. (AP Photo/Susan Walsh) 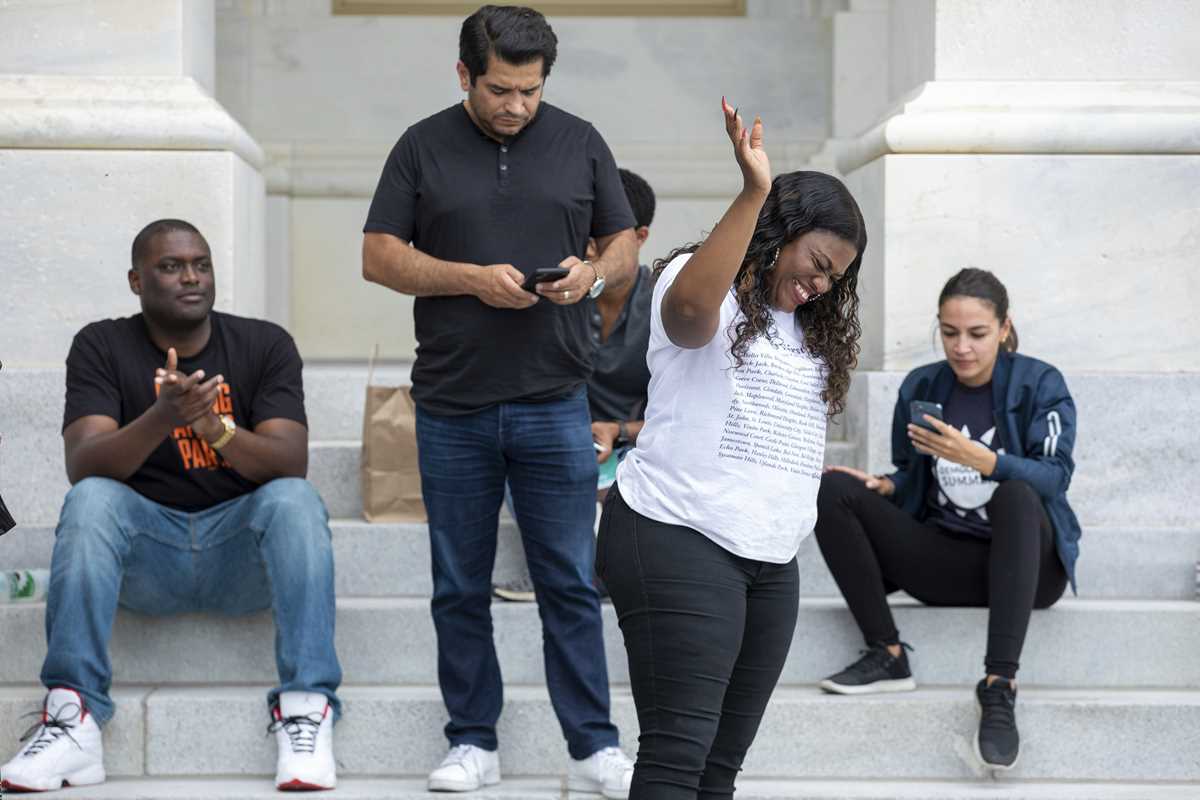 Casey Long and Adrienne, a service dog in training, sit on the steps of Capitol Hill in Washington on Tuesday, Aug. 3, 2021. Treasury Secretary Janet Yellen briefed House Democrats Tuesday on the administration’s efforts to prevent widespread housing evictions after a moratorium lapsed, but lawmakers protesting outside the U.S. Capitol said more needs to be done, intensifying pressure on President Joe Biden to act. (AP Photo/Amanda Andrade-Rhoades) 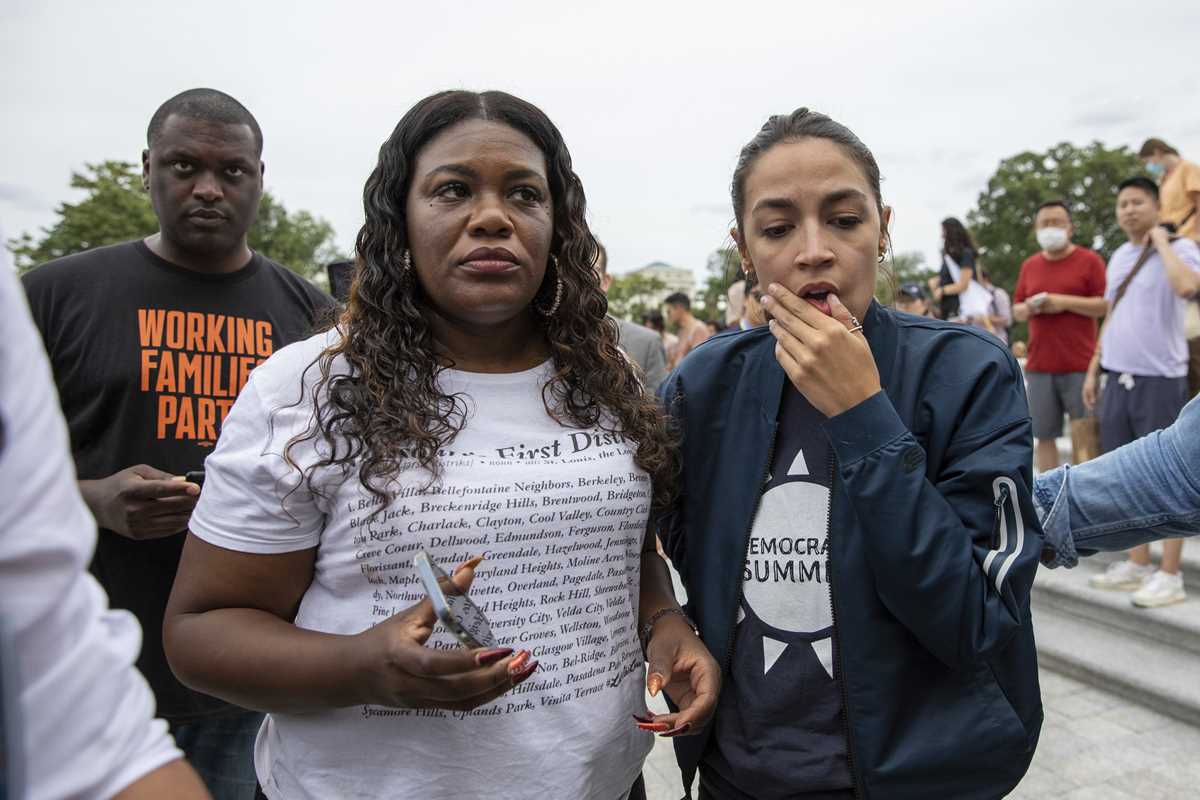 Supporters of Rep. Cori Bush, D-Mo., camp with her outside the U.S. Capitol, in Washington, Monday, Aug. 2, 2021, as anger and frustration has mounted in Congress after a nationwide eviction moratorium expired at midnight Saturday. (AP Photo/Jose Luis Magana)

WASHINGTON (AP) — The Centers for Disease Control and Prevention on Tuesday issued a new moratorium on evictions that would last until October 3, as the Biden administration sought to quell intensifying criticism that it was allowing vulnerable renters to lose their homes during a pandemic.

The new moratorium could help keep millions in their homes as the coronavirus’ delta variant has spread and states have been slow to release federal rental aid. It would temporarily halt evictions in counties with “substantial and high levels” of virus transmissions and would cover areas where 90% of the U.S. population lives.

The announcement was something of a reversal for the Biden administration after saying that a Supreme Court ruling prevented a moratorium. But the choice to impose a new measure in the face of legal uncertainty was also a win for the progressive lawmakers who pushed the White House to do more to prevent some 3.6 million Americans from losing their homes during the COVID-19 crisis.

President Joe Biden stopped short Tuesday afternoon of announcing the new ban on evictions during a press conference at the White House, ceding the responsibility to the CDC.

“My hope is it’s going to be a new moratorium,” Biden told reporters.

The extension could help heal a rift with liberal Democratic lawmakers who were calling on the president to take executive action to keep renters in their homes as the delta variant of the coronavirus spread and a prior moratorium lapsed over the weekend.

The new policy came amid a scramble of actions by the Biden team to reassure Democrats and the country that it could find a way to limit the damage from potential evictions through the use of federal aid. But pressure mounted as key lawmakers said it was not enough.

Top Democratic leaders joined Rep. Cori Bush, D-Mo., who has been camped outside the U.S. Capitol, the freshman congresswoman who once lived in her car as a young mother, leading a passionate protest urging the White House to prevent widespread evictions.

Read about the small cap that might make history with its nanotechnology.

“For 5 days, we’ve been out here, demanding that our government acts to save lives,” she tweeted. “Today, our movement moved mountains.”

House Speaker Nancy Pelosi said it was a day of “extraordinary relief.”

“The imminent fear of eviction and being put out on the street has been lifted for countless families across America. Help is Here!” Pelosi said in a statement.

Administration officials had previously said a Supreme Court ruling stopped them from setting up a new moratorium without congressional backing, saying states and cities must be more aggressive in releasing nearly $47 billion in relief for renters on the verge of eviction.

The president said he sought input from legal scholars about whether there were options and said the advice was mixed, though some suggested, “It’s worth the effort.” Biden also said he didn’t want to tell the CDC, which has taken the public health lead in responding to the pandemic, what to do.

“I asked the CDC to go back and consider other options that may be available,” he said.

The CDC has identified a legal authority for a new and different moratorium for areas with high and substantial increases in COVID-19 infections.

Biden also insisted there is federal money available — some $47 billion previously approved during the COVID-19 crisis — that needs to get out the door to help renters and landlords.

“The money is there,” Biden said.

The White House has said state and local governments have been slow to push out that federal money and is pressing them to do so swiftly.

Treasury Secretary Janet Yellen briefed House Democrats Tuesday about the work underway to ensure the federal housing aid makes it to renters and landlords. She provided data so that lawmakers could see how their districts and states are performing with distributing the relief, according to a person on the call.

The treasury secretary tried to encourage Democrats to work together, even as lawmakers said Biden should act on his own to extend the eviction moratorium, according to someone on the private call who insisted on anonymity to discuss its contents.

Yellen said on the call, according to this person, that she agrees “we need to bring every resource to bear” and that she appreciated the Democrats’ efforts and wants “to leave no stone unturned.”

As the eviction crisis mounted, the White House frequently said Biden was doing all he could under legal constraints. The administration had repeatedly resisted another extension because the Supreme Court appears likely to block it. When the court allowed the eviction ban to remain in place through the end of July by a 5-4 vote, one justice in the majority, Brett Kavanaugh, wrote that Congress would have to act to extend it further.

As the initial moratorium expired, the administration emphasized many Americans will be able to stay housed with money already approved for aid and other efforts underway. The White House noted that state-level efforts to stop evictions would spare a third of the country from evictions over the next month.

Still, Biden faced stinging criticism, including from some in his own party, that he was was slow to address the end of the moratorium. Some people were at immediate risk of losing their homes.

Pelosi had called the prospect of widespread evictions “unfathomable.” The Congressional Black Caucus, the Congressional Hispanic Caucus and other progressive lawmakers intensified pressure on the White House to issue an immediate extension.

Late last week, Biden announced he was allowing the ban to expire, pushing Congress to act, but lawmakers were unable to swiftly rally the votes as even Democrats questioned prolonging the eviction ban for a few more months.

The CDC put the initial eviction ban in place as part of the COVID-19 response when jobs shifted and many workers lost income. The ban was intended to hold back the spread of the virus among people put out on the streets and into shelters.

Democratic lawmakers said they were caught by surprise by Biden’s decision to end the moratorium, creating frustration and anger and exposing a rare rift with the administration. The CDC indicated in late June that it probably wouldn’t extend the eviction ban beyond the end of July.

Rep. Maxine Waters, the powerful chair of the Financial Services Committee, has been talking privately for days with Yellen and urged the treasury secretary to use her influence to prod states to push the money out the door. But Waters also called on the CDC to act on its own.

After the CDC’s announcement Tuesday, Waters released a statement thanking Biden “for listening and for encouraging the CDC to act! This extension of the moratorium is the lifeline that millions of families have been waiting for.”