In this Aug. 13, 2020 file photo, fashion designer Stella Jean wears a face mask to curb he spread of COVID-19 as she holds fabrics during an interview with the Associated Press, in Rome. A digital runway show by five Italian fashion designers of African origin opens Milan Fashion Week on Wednesday, Feb. 24, 2020, one tangible result of a campaign launched last summer by the only Black Italian designer belonging to the Italian fashion chamber. (AP Photo/Andrew Medichini, file) 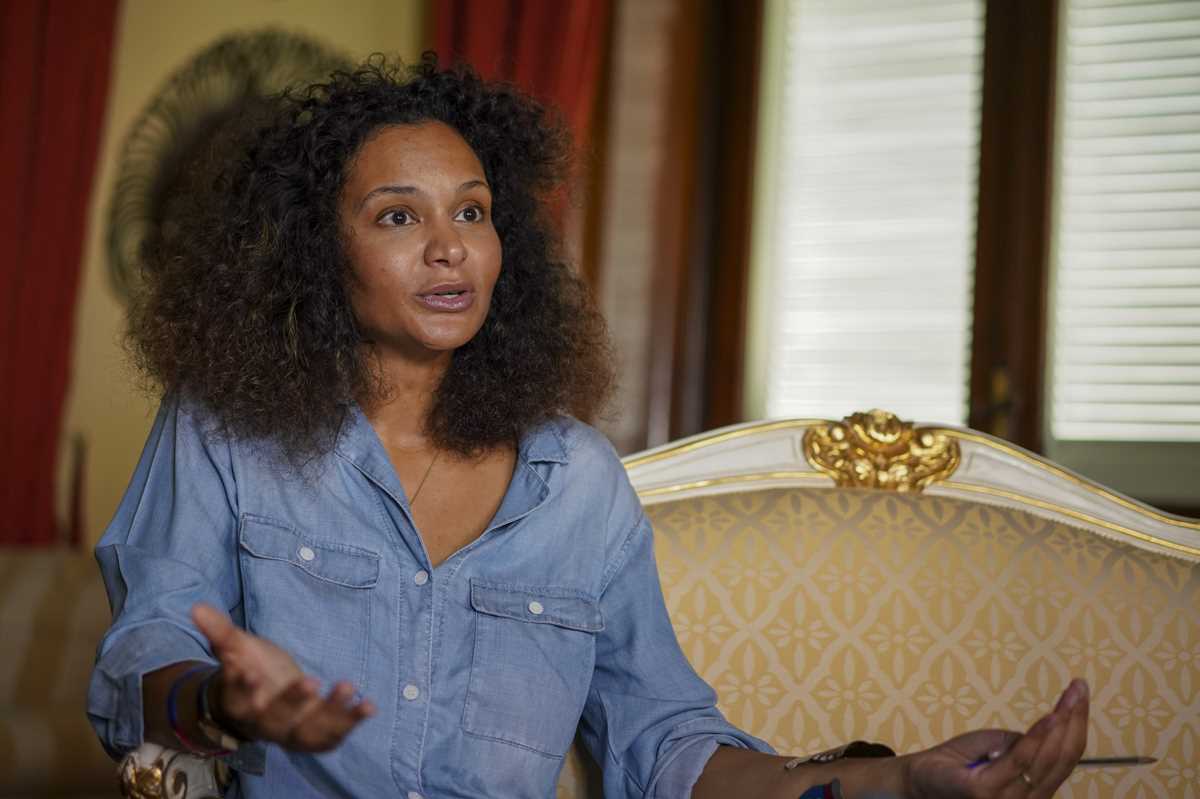 In this Aug. 13, 2020 file photo, fashion designer Stella Jean talks during an interview with the Associated Press, in Rome. A digital runway show by five Italian fashion designers of African origin opens Milan Fashion Week on Wednesday, Feb. 24, 2020, one tangible result of a campaign launched last summer by the only Black Italian designer belonging to the Italian fashion chamber. (AP Photo/Andrew Medichini, file)

After some initial resistance and a slow start, designer Stella Jean credits the Italian National Fashion Chamber with “a lot of goodwill” in pushing through an enhanced collaboration with five young designers, including financing and partnerships with Italian suppliers.

“When you want to do something, you can do them immediately,’’ said Jean, one of the founders of the Black Lives Matters in Italian Fashion campaign. “I have been working hard to overcome this gradualism that is part of the mentality of a certain part of the Italian fashion world.”

She launched the campaign with designer Edward Buchanan and Afro Fashion Week Milano founder Michelle Ngomo after fashion houses expressed solidarity with the Black Lives Matters Movement on Instagram, demanding that they put action behind their social media pledges. Jean, who got her break when Giorgio Armani invited her to show in his theater in 2014, said putting the spotlight on Italians of African origin is important to combat one of the first obstacles the campaign ran up against: claims that there were no Black designers in Italy.

The collaboration with the Italian fashion council will continue in September, when five new designers from Italy’s minority communities will be featured during fashion week. And Jean also is creating an event featuring designers and artisans from Africa, with the goal of creating partnerships between Italian fashion houses that can learn sustainable production methods in exchange for training in the global fashion system.

“You speak about sustainability ad nauseam here, and what I see is anything but sustainable, believe me. In the countries where I work, people are working 99% sustainably, as a result of necessity, of restriction or desire,’’ Jean said.

Jean is also working on a database of African artisanal techniques, fabrics, motifs and other cultural references. The Italian-Haitian designer sees the move as a bulwark against cultural appropriation that does not economically benefit Africans and a way to prevent racist gaffes.

Valerie Steele, director of the Fashion Institute of Technology’s museum, said many of Jean’s ideas could be replicated in the United States and elsewhere.

Steele, who has some of Jean’s creations in the collection, recorded a conversation with the Italian designer for Black History Month, which will be released on FIT’s YouTube channel on Thursday to highlight Jean’s role in shaking up Italian fashion.

Steele said Black designers are also under-represented in the United States, despite the role Black culture has had on inspiring fashion there.

“When a few years ago we did an exhibition on Black fashion designers, which was an international show Stella was in, we were very shocked to realize that on the Vogue.com, something ridiculous, like 1% of the designers who were featured were Black,” Steele said.

Despite their disagreements (real or imagined) on almost everything, Democrats and Republicans alike love infrastructure projects. These are easy wins for Congressional leaders seeking re-election. And they typically spur job creation, which contributes to economic growth.

With that in mind, it’s ironic that, in the last four years, the United States Congress did not pass an infrastructure bill.

Nevertheless, even with (and maybe because of) the gridlock that looks to be in the country’s future, the infrastructure looks to be on the front burner again. The economic recovery is still far from complete. Unfortunately, neither are America’s roads, energy grid, telecommunications systems, and the like. That means that it would seem like a good policy for a Biden administration to look at an infrastructure bill.

Biden will be under pressure to endorse the $1.5 trillion infrastructure package that the Democrat-controlled House of Representatives passed in July. But the package may need to be tweaked a bit since it currently includes climate change initiatives that have kept the bill from advancing through the Senate.

However, it appears that the economy will need some significant juice after whatever this winter brings in terms of the virus. And if calmer heads prevail (we can always hope), there may be a major infrastructure bill to stimulate job creation. And we’ve identified seven stocks that should bear watching if this comes to pass.

View the “7 Infrastructure Stocks That May Help Rebuild America”.

GBP/CHF Up 10 Pips Over Past Hour, in an Uptrend Over Past 30 Days; Bearish Engulfing Pattern Present

Why Did Xtant Medical Holdings Spike Over 100% Today?