In this June 8, 2021, file photo, Tracy Stone-Manning listens during a confirmation hearing for her to be the director of the Bureau of Land Management, during a hearing of the Senate Energy and National Resources Committee on Capitol Hill in Washington. West is facing pressure to withdraw over her ties to environmental activists convicted of spiking trees to sabotage a national forest timber sale more than 30 years ago. (AP Photo/Alex Brandon, File) 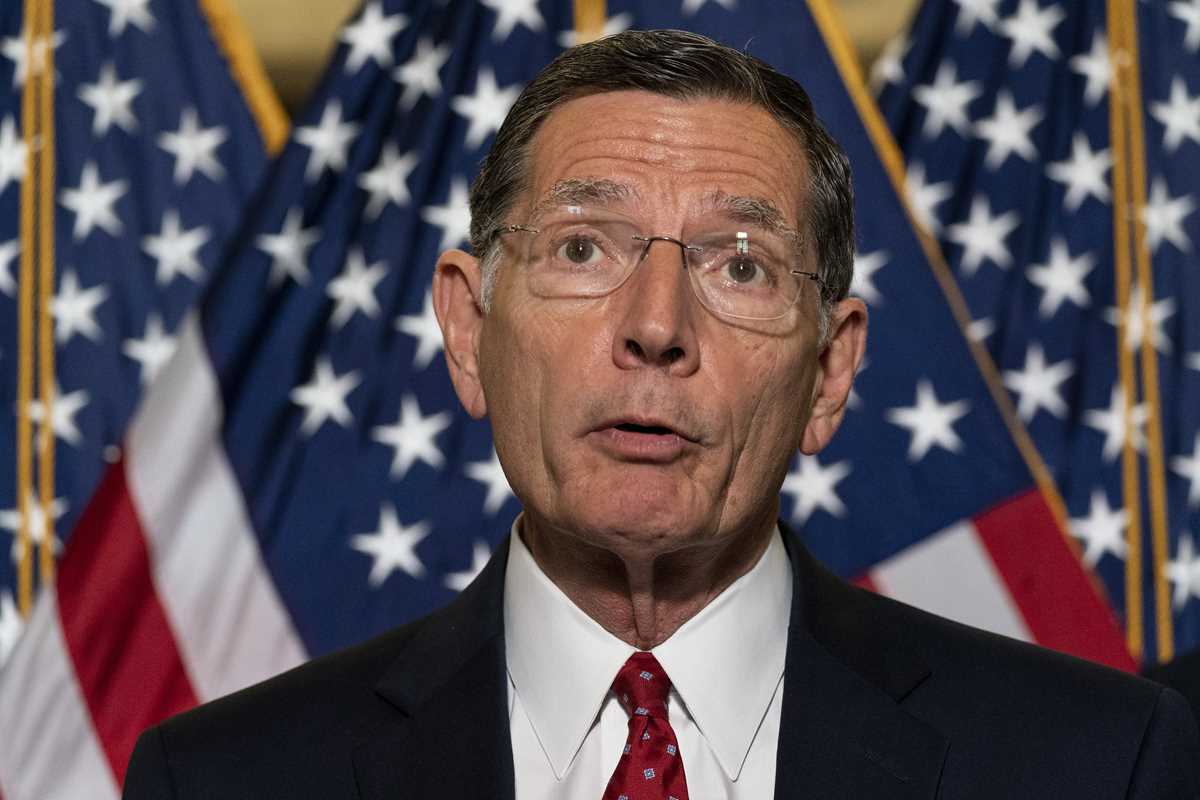 In this June 8, 2021, file photo, Sen. John Barrasso, R-Wyo., speaks with reporters after a Republican caucus luncheon on Capitol Hill in Washington. Barrasso said Friday, June 11, 2021, that U.S. Bureau of Land Management nominee Tracy Stone-Manning should be disqualified over her links to “extreme environmental activists” when Manning was a graduate student in the 1980s. (AP Photo/Alex Brandon, File)

BILLINGS, Mont. (AP) — President Joe Biden’s nominee to oversee federal lands in the U.S. West is facing Republican pressure to withdraw over her ties to environmental activists convicted of spiking trees to sabotage a national forest timber sale more than 30 years ago.

U.S. Sen. John Barrasso, the ranking Republican on the Senate energy committee, said Friday that U.S. Bureau of Land Management nominee Tracy Stone-Manning should be disqualified for her collaboration with “extreme environmental activists.”

As a 23-year-old graduate student at the University of Montana, Stone-Manning sent a letter to federal officials in 1989 saying spikes had been inserted into trees in Idaho’s Clearwater National Forest. The profanity-laced letter warned “a lot of people could get hurt” if logging proceeded, according to court documents obtained by The Associated Press from federal archives.

Spiking trees involves inserting metal or ceramic rods into trunks so they can’t be safely cut down, and the tactic has sometimes been used to halt timber sales.

Stone-Manning testified against two friends who were convicted in the case, saying she mailed the letter at the request of one of them and to prevent people from getting hurt. She was given immunity to testify and was never charged with any crimes.

The case received extensive media coverage at the time, and Stone-Manning years later had to explain her involvement to Montana lawmakers prior to her confirmation to lead the state’s environment agency under former Gov. Steve Bullock.

Its resurfacing comes as some Republicans have sought to undermine Stone-Manning’s nomination, characterizing her as a partisan Democrat and environmental radical.

Barrasso, of Wyoming, said after seeing the documents in the case that Stone-Manning’s participation should disqualify her from heading the Bureau of Land Management, which regulates grazing, energy drilling, logging and other activities across 245 million acres (100 million hectares) primarily in the West.

According to one Wall Street Legend, “for those who take early action, it could make 2021 one of your best years ever”.

“Tracy Stone-Manning collaborated with eco-terrorists,” Barrasso said in a statement. “She worked with extreme environmental activists who spiked trees, threatening the lives and livelihoods of loggers. While she was given immunity from prosecution to testify against her companions in court, her actions were disgraceful.”

Stone-Manning did not respond to telephone and text messages seeking comment.

An administration official who asked not to be identified said officials knew about the criminal case and Stone-Manning’s testimony prior to her nomination.

She ‘”has always been honest and transparent about this matter, which has been covered by the media for decades,” said the person, who asked not to be identified because they were not authorized to discuss a pending nomination.

During a Tuesday hearing before the Senate Energy and Natural Resources Committee, GOP lawmakers including Barrasso grilled Stone-Manning over her record as a senior official at the National Wildlife Federation, where she was a frequent critic of the Trump administration’s pro-industry agenda.

The animosity toward her nomination reflects anger among some Republicans over Stone-Manning’s role in the 2020 election. She served as treasurer and board member of the environmental group Montana Conservation Voters, which ran ads against Montana Republican Sen. Steve Daines when Bullock unsuccessfully challenged him in November.

“It seems like from your heart, you really don’t care for Republicans,” Republican Sen. Bill Cassidy of Louisiana said to Stone-Manning in the hearing.

Bullock told the AP during an interview on Friday that “the election is over” and Republicans were grasping at events from 30 years ago to try to sink her nomination.

The former Democratic governor said he knew about the tree spiking case when he hired Stone-Manning. One of the friends she testified against was sentenced to 17 months in prison on federal charges.

“She helped send a guy to prison 30 years ago when she was a college kid,” Bullock said. “It’s never been a secret at all.”

At the time of the tree spiking, Stone-Manning was a recently arrived environmental studies graduate student in Missoula. She also worked during that time as an informal spokesperson for the loose-knit environmental group EarthFirst!, whose members gained notoriety in the 1980s for espousing “direct action” such as blocking timber sales to protect the environment.

As part of her involvement, she helped edit a newsletter called the Wild Rockies Review and participated in satirical skits aimed at drawing attention to timber sales, according to a transcript of her 1989 testimony.

In 2013, when she was questioned by Montana lawmakers about her involvement with EarthFirst!, Stone-Manning responded that she had left because the group’s members were “angry.”

“Anger doesn’t do much. It doesn’t solve problems. What I do is solve problems,” she said, according to an article in the Missoulian.

Beginning in 1999 Stone-Manning directed a nonprofit group that pushed cleanup of one of the country’s largest contaminated Superfund sites, Montana’s Clark Fork River. She later worked as an aide to Sen. Jon Tester and chief of staff for Bullock.

Tester introduced Stone-Manning during the Senate hearing and defended her after Barrasso criticized her environmental record.

The vote on her nomination has not been scheduled. It would take every Senate Republican plus at least one Democratic lawmaker to block her nomination.

Featured Article: What are gap-up stocks?

Synthetix Came Into Today Up 1.63%

Japan keeps budget goal intact for now but aims to reassess it later Reuters via biedexmarkets.com