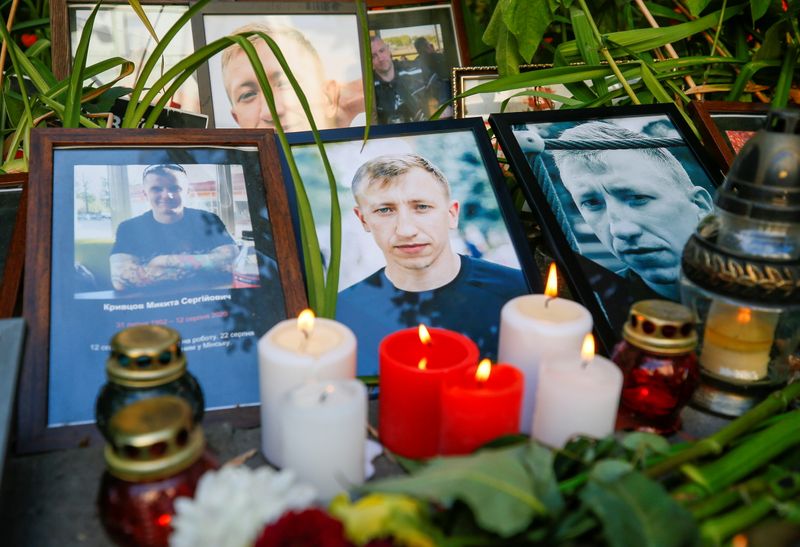 © Reuters. Candles are placed next to the portraits of Vitaly Shishov, a Belarusian activist living in exile who was found hanged in a park near his home this morning, during a commemoration rally next to the Belarusian Embassy to Ukraine in Kyiv, Ukraine August 3,

KYIV (Reuters) – Vitaly Shishov, an exiled Belarusian activist who was found hanged in a park in Kyiv in what police say could have been a murder, was an outspoken critic of the government in Belarus and staged rallies against it in Ukraine’s capital.

After leaving Belarus last autumn during huge anti-government protests that he took part in, the 26-year-old set up and led a Kyiv-based organisation that helped Belarusians fleeing a sprawling crackdown on dissent.

Shishov, who was sporty and a boxing enthusiast, was sure he was under surveillance in Kyiv and he outed purported Belarusian agents at rallies, friends and colleagues said.

“He would photograph the person, film him and after that it wasn’t too hard to find him online,” Denis Stadzhi, a Belarusian journalist and diaspora member, told Reuters.

Police say his death was either a suicide or a murder made to look like a suicide. His colleagues accuse the Belarusian security services of murdering him. Authorities in Minsk have not commented.

Shishov was a fierce critic of Belarusian leader Alexander Lukashenko whose declared win at last year’s elections sparked mass protests. Shishov described him in one post as a “bloodthirsty monster” and a “dictator”.

In Kyiv, he set up the Belarusian House in Ukraine (BDU) together with a Latvian national. The group helps fleeing Belarusians find accommodation, jobs and legal advice. Kyiv has become a haven for Belarusians fleeing the crackdown.

Shishov’s group staged rallies and were involved in opposition events like a sit-in outside the Belarusian embassy and an event to commemorate Belarusian post-Soviet independence.

Ihor, 24, a group member who declined to give his surname, said the group had written manuals to help Belarusians settle in and legalise themselves.

“He didn’t shy away from anything. He advised people on how to leave Belarus, he organized food aid… He wrote posts with information, articles. He did everything,” he said.

“Vitaly was being followed… There was a case when a car followed him straight out of Kyiv. They noticed the tail, made a detour and saw that it really was following them,” he said.

Yuri Shchuchko, a close friend and activist, told Reuters that Shishov had run several channels on Telegram messenger that Belarus has labelled “extremist”. He said some of those related to a movement that “intended to struggle against the Lukashenko regime using not the most peaceful methods”.

Shishov was reported missing by his partner on Monday after failing to return home from a run.

“When a man is a warrior, he is ready for death,” Shchuchko said. “Judging from what I know about Vitaly, he was ready for the fight, he was a warrior, he suppressed his fear and that’s why went out for jogging (in the wood).”

Shchuchko said he had identified Shishov’s body and that a police officer at the site had said Shishov had a broken nose.

Police later said he did not have a broken nose, but there were abrasions on his nose and knee. It said a proper examination was needed to determine if he had been beaten.