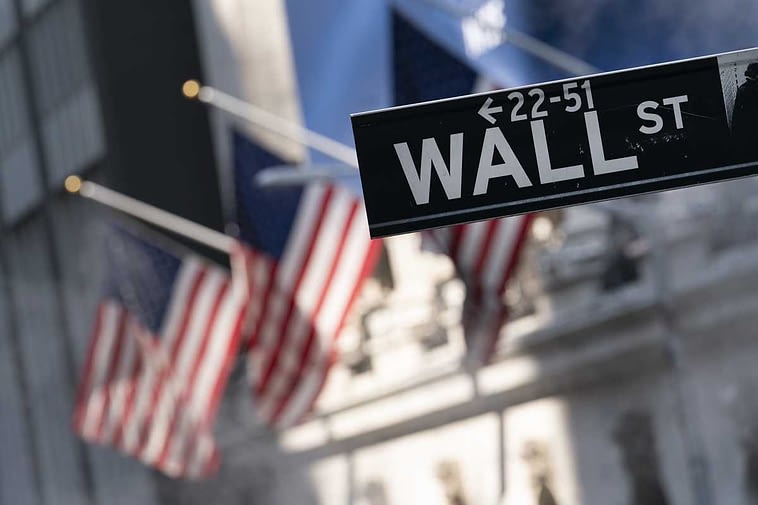 A sign for Wall Street hangs in front of the New York Stock Exchange, July 8, 2021. Stocks are edging lower on Wall Street in early trading Tuesday, Aug. 31, 2021 a day after the S&P 500 and the Nasdaq hit their latest record highs. The S&P 500 slipped 0.2% and the Nasdaq gave back 0.3%. Traders are keeping their eye on a final trickle of company earnings and looking ahead to Friday, when the Labor Department will release its monthly jobs report. (AP Photo/Mark Lennihan, file)

BEIJING (AP) — Asian stock markets were mixed Wednesday as investors weighed the economic impact of the spread of the coronavirus’s delta variant and Wall Street ended August with a gain for the seventh straight month.

Wall Street’s benchmark S&P 500 declined 0.1% from the previous day’s record but ended August with a 2.9% gain.

Investor optimism about stronger U.S. corporate profits and that the Federal Reserve will keep interest rates low is being tested by data showing the delta variant is weighing on economic activity.

Powell’s comments are “slowly being overshadowed by mixed economic data” as the virus impact “becomes more obvious,” said Venkateswaran Lavanya of Mizuho Bank in a report.

On Tuesday, a U.S. business group, the Conference Board, reported consumer confidence fell sharply in August. Most of the decline was tied to the delta variant, which has inundated hospitals with patients.

Also Wednesday, a survey found Chinese manufacturing decelerated in August as demand weakened and factories struggled with supply disruptions. The monthly purchasing managers’ index by business magazine Caixin fell to 49.2 from July 50.1 on a 100-point scale on which numbers above 50 show activity growing.

Investors are trying to figure out which industries gain and which will lose as they grapple with supply disruptions, the spread of the more contagious variant of the virus and signs of possible consumer caution.

On Friday, the Labor Department is due to report U.S. employment conditions in August.

In energy markets, benchmark U.S. crude rose 33 cents to $68.83 per barrel in electronic trading on the New York Mercantile Exchange. The contract fell 71 cents on Tuesday to $68.50. Brent crude, used to price international oils, gained 28 cents to $71.91 per barrel in London. It fell 42 cents the previous session to $72.99.

7 Stocks That Cathie Wood is Buying And You Should Too

If you’re an investor that likes to go with the “hot hand,” then they don’t get much hotter than Cathie Wood. The founder and CEO of ARK Investment Management delivered returns of over 100% in all five of her firm’s exchange-traded funds (ETFs) in 2020.

The names of her funds showcase some of the hottest emerging growth trends in the market: financial technology (fintech), genomic revolution, innovation, autonomous technology/robotics, and next generation internet.

As you would expect, these funds contain some of the hottest growth stocks from the past year. And in the aftermath of the tech selloff, Wood is not backing away. In fact, she’s doubling down on her strategy. It might not be exactly a matter of being greedy while others are fearful; perhaps more like being prepared while others are distracted.

But the other thing about Wood’s selections is that many of them are not obscure names. These are companies that were among the hottest names in 2020. Wood simply believes that they still have room to run. And that’s one reason you should consider making them a part of your portfolio.

In this special presentation, we’re giving you just seven of the stocks that Cathie Wood is buying or has bought recently. We’ve attempted to pick out at least one stock from each of the ARK ETFs. As with any investment decision, it’s important that you perform your own research before making a decision.

View the “7 Stocks That Cathie Wood is Buying And You Should Too”.