Home - Stockmarkets - Apple Stock Is Near Perfect, So Trade it With Confidence

Apple Stock Is Near Perfect, So Trade it With Confidence

Investment styles vary but the homework always requires the same vital elements: a viable thesis inside a healthy macroeconomic condition. The methods to implement these ideas are not as important as their validity. This concept is fading fast as meme stocks like AMC (NYSE:AMC) and GameStop (NYSE:GME) hog the headlines. There’s hardly any investing happening, and it’s all about the quick buck off lunatic price action. That is not the case in Apple (NASDAQ:AAPL) stock.

There are very few hardcore critics of the state of this company. The income statement speaks for itself and the expert opinions don’t matter. They sell out of every widget they make, and at a premium price. Their clientele does not mind overpaying, so it doesn’t get much better than that.

Furthermore, competition is not an issue judging by my son’s decision this week. He opted for an older and used iPhone 11 over a new 5G android. Even though mine had twice the memory, much larger battery and one-third of the price.

My only problem is that AAPL is still an iPhone company. I give them credit for diversifying the sales mix away from the handset. The services contribution is doubling fast, but almost all of them still revolve around the iPhone.

Eventually they will need another source of income that doesn’t need an iPhone.

Buy the Dip in AAPL Stock

For now, every major correction in Apple stock is most definitely a buying opportunity. Do your homework, set your levels and wait for the opportunity to pounce. I am leery about AAPL ripping through current levels because of history. In the past 12 months, the zone near $128 per share has been very pivotal (circles on chart). This also repeats at $132 and $136 per share. Each of those lines will be resistances until the bulls can take them out. Then, they turn into mini catalysts to lead to the next challenge ahead.

As good as the bullish thesis is, Apple is down 5% this year. In contrast, the S&P 500 is up 13%. Don’t feel too bad for it because AAPL is up almost twice as much as the S&P over 12 months. Companies this size don’t usually rally 53% in 12 months, 167% in two years, and 413% in five. The fundamental metrics are not currently cheap relative to its history. The price-to-earnings ratio of 28 is not a travesty but it is 10 points higher than normal. The new sales mix could explain this, but I reserve my judgement for later.

From a technical perspective, investors may have a much cheaper entry point into Apple stock in the next few months. The bulls and bears are battling it out inside a relatively tight range between $128 and $122 per share. The breach of either of these two sides will result in momentum carrying forward in that direction. Given that the indices are at their all-time highs, I give better odds for the downside scenario.

This is not reason enough to short the stock outright given its fundamental strength. But it does warrant exercising restraint and limiting the enthusiasm. There is resistance for the next $8 above current price. Conversely, the fans have defended the support vigorously at least three times since May. Moreover it was a huge battle zone coming out of the February-March correction. Pivots like these become solid footing.

Even a Near Perfect Stock Carries Risk 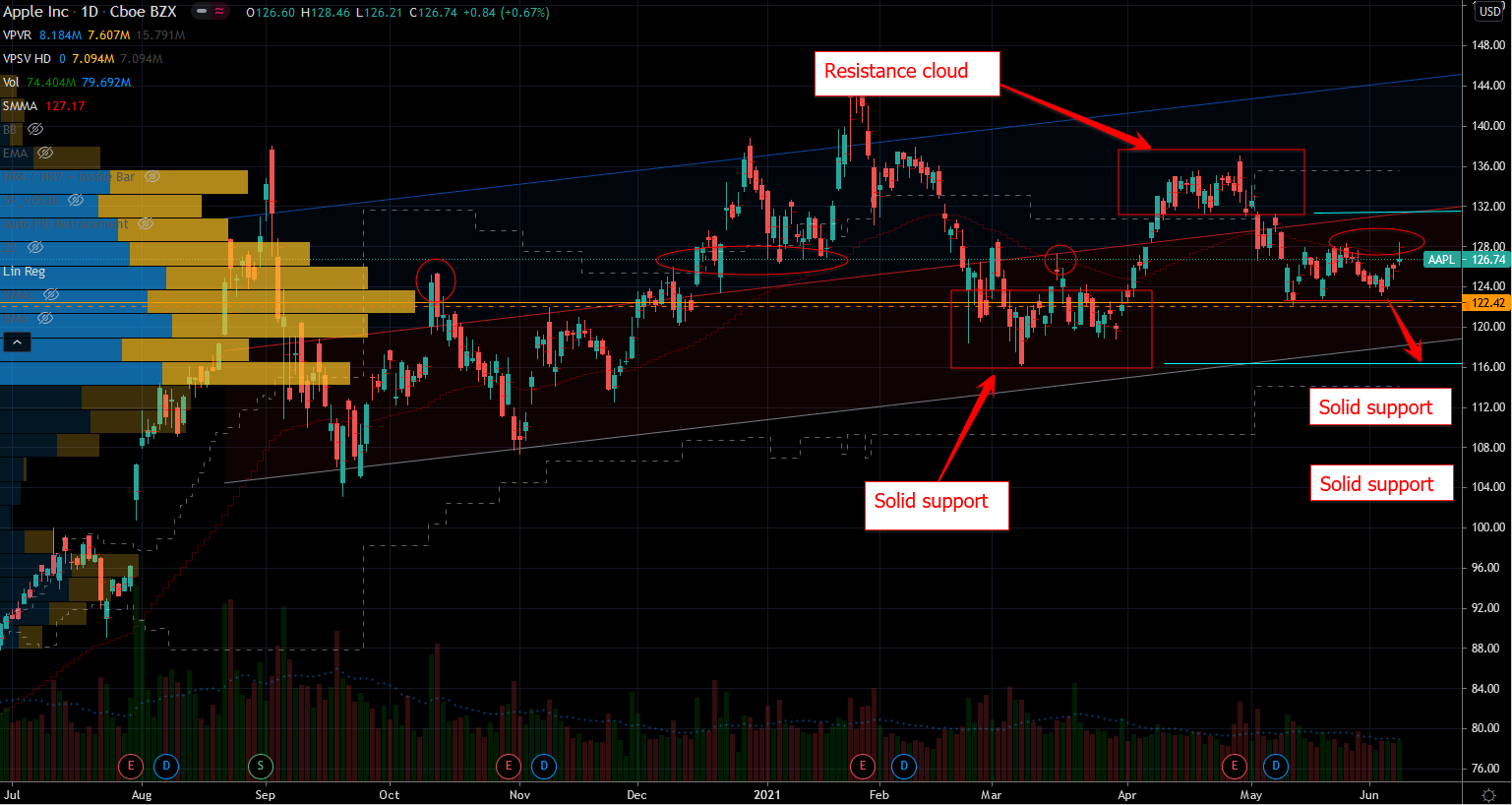 If the markets remain bullish into the summer, then AAPL can gain 10%. The decision to take a position now depends on the time frame of the investor. I would rather wait at least two weeks. At the very worst I would only take a small starter position to relieve the itch. I am not seeking a perfect entry point, but I always try to find the strongest possible base. Nobody wants to start out red in a position even if it’s for the long term.

This next paragraph is going to upset a few Apollonians. I preface it by saying that this is not my forecast but it is a viable scenario. If AAPL stock loses its $122 prop, it could lose another 7% from there. This is a purely technical comment, and one that would open a wonderful entry point.

I have had great luck adding longs when the markets are freaking out. My prior action levels were at $117, $112, and $104 per share. My conviction in those positions grows the deeper the correction. If the downside scenario does not play out, I am OK missing out on a few upside bucks. Options traders can deploy bullish strategies now and leave plenty of room for error. Contrary to popular belief, selling puts to own shares at a lower price gives investors in margin of error.

In this article I blurred the line between investing and trading on purpose. Apple stock is a rare one that allows this hybrid approach. What we learned this year is that this is the time to evolve our investing strategies. I don’t mean hop into a Reddit room and chase wild tickers to the moon. Using very basic chart observation can improve everyone’s decision making process.

On the date of publication, Nicolas Chahine did not have (either directly or indirectly) any positions in the securities mentioned in this article. The opinions expressed in this article are those of the writer, subject to the biedexmarkets.com.com Publishing Guidelines.