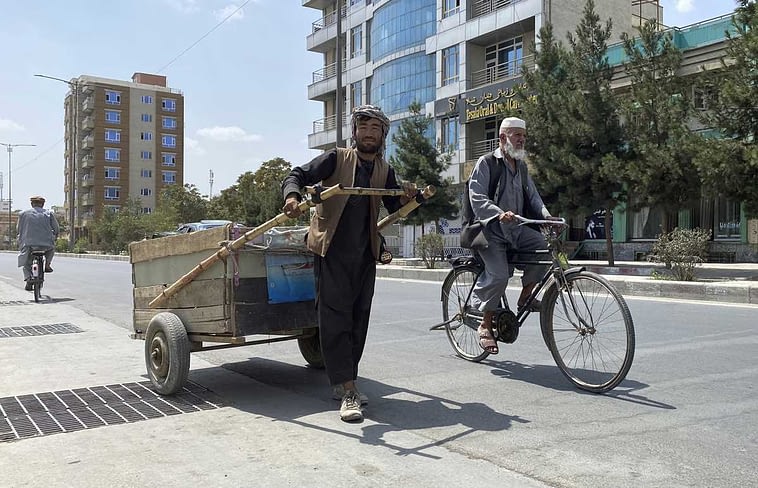 Sal Mohammad, 25, an Afghan man who gathers pieces of iron from the street to sell for scrap, pushes his handcart in Kabul, Afghanistan, Tuesday, Aug. 31, 2021. (AP Photo/Sayed Ziarmal Hashemi) 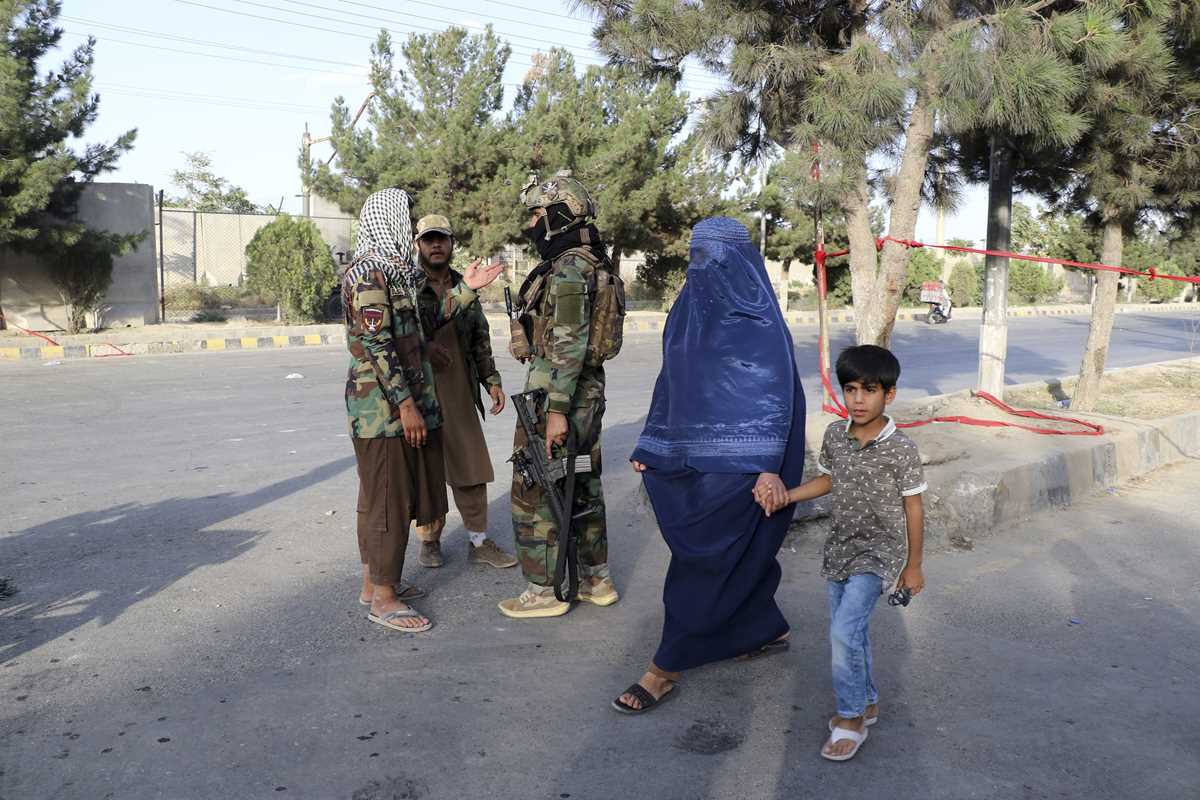 Taliban fighters stand guard at a checkpoint near the gate of Hamid Karzai international Airport in Kabul, Afghanistan, Saturday, Aug. 28, 2021. The Taliban have sealed off Kabul’s airport to most would-be evacuees to prevent large crowds from gathering after this week’s deadly suicide attack. The massive U.S.-led airlift was winding down Saturday ahead of a U.S. deadline to withdraw from Afghanistan by Tuesday. (AP Photo/Wali Sabawoon) 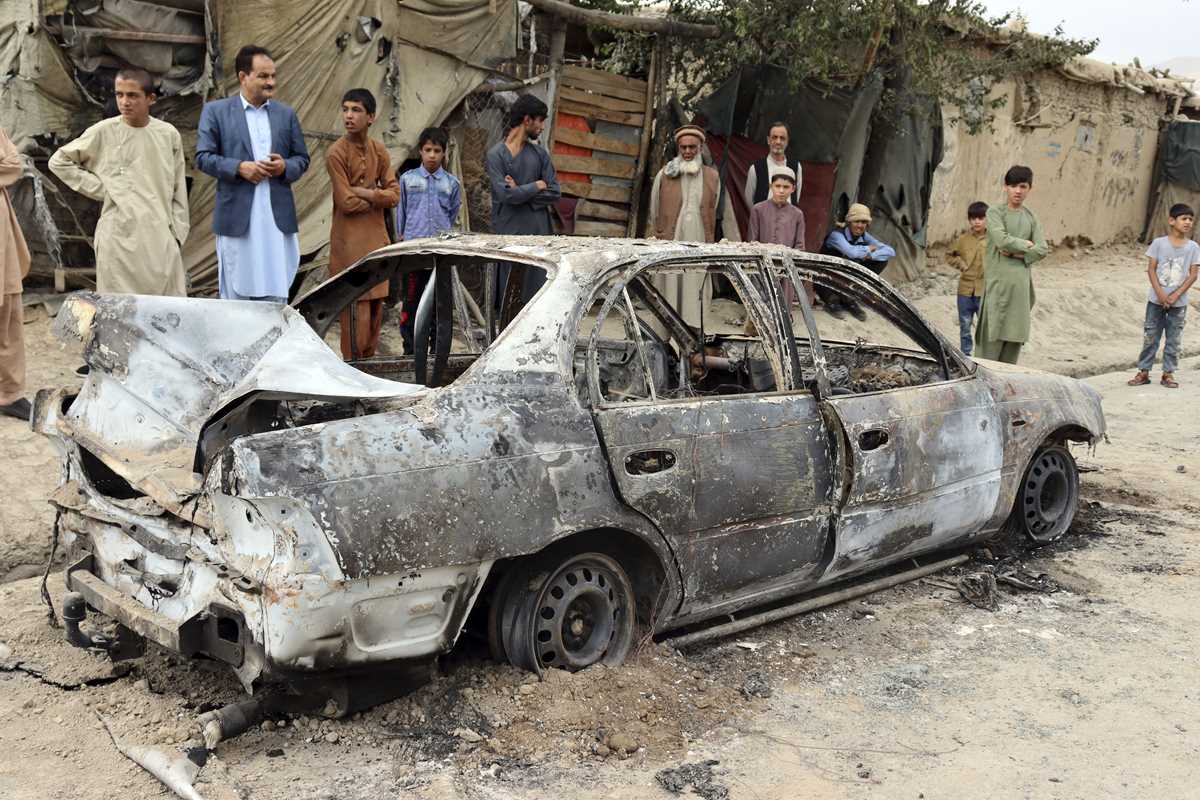 Locals view a vehicle damaged by a rocket attack in Kabul, Afghanistan, Monday, Aug. 30, 2021. Rockets struck a neighborhood near Kabul’s international airport on Monday amid the ongoing U.S. withdrawal from Afghanistan. It wasn’t immediately clear who launched them. (AP Photo/Khwaja Tawfiq Sediqi) 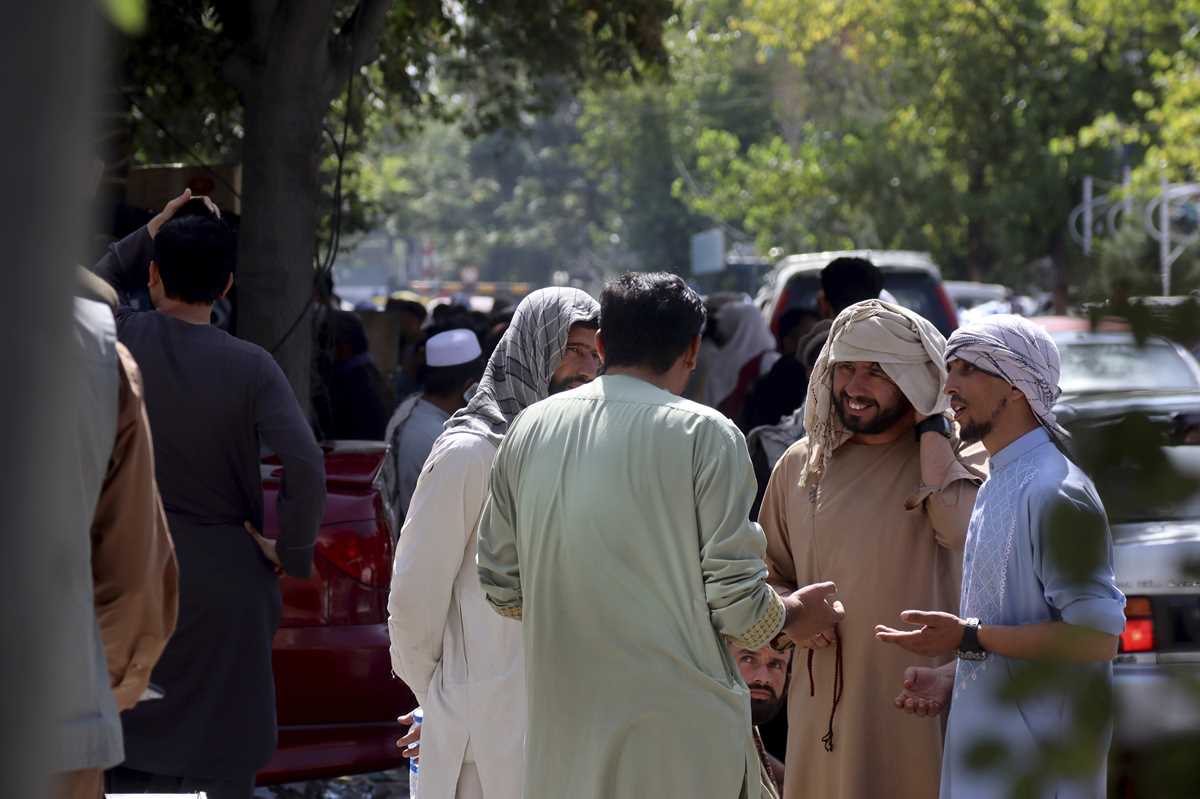 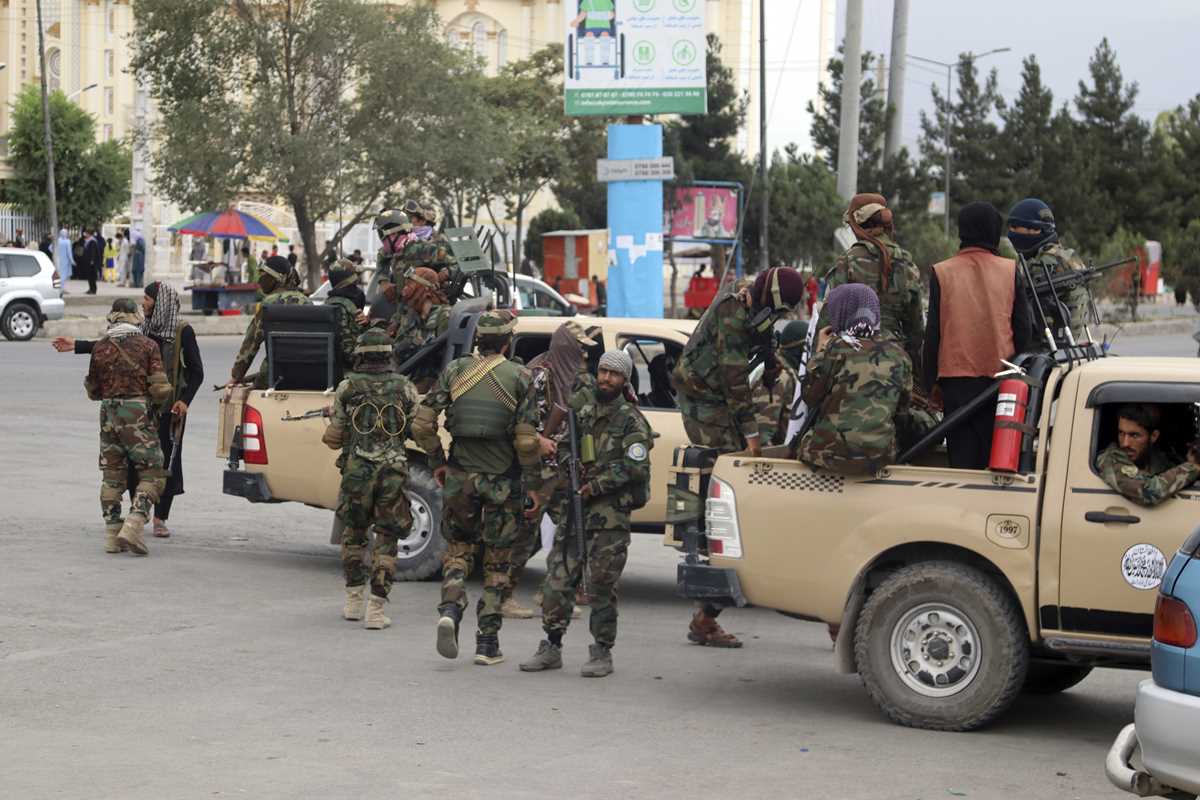 Taliban fighters arrive outside the Hamid Karzai International Airport after the U.S. military’s withdrawal, in Kabul, Afghanistan, Tuesday, Aug. 31, 2021. The Taliban were in full control of Kabul’s airport on Tuesday, after the last U.S. plane left its runway, marking the end of America’s longest war. (AP Photo/Khwaja Tawfiq Sediqi) 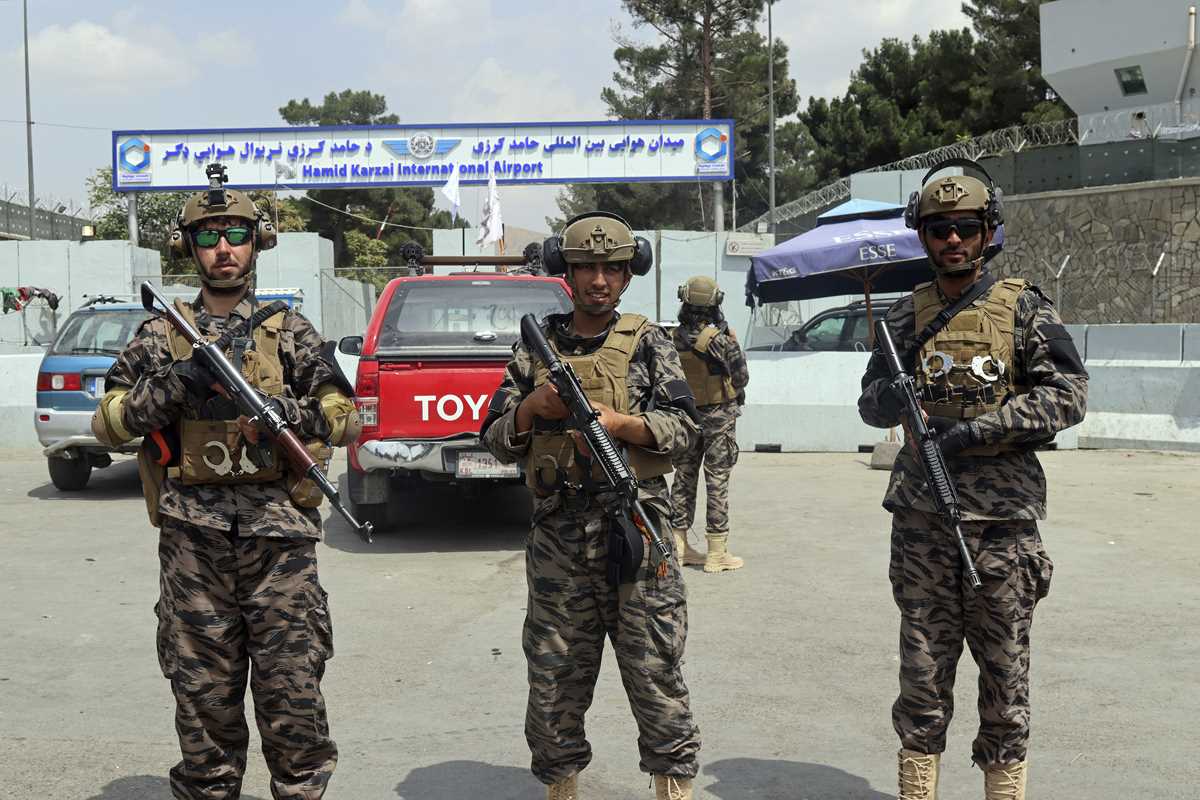 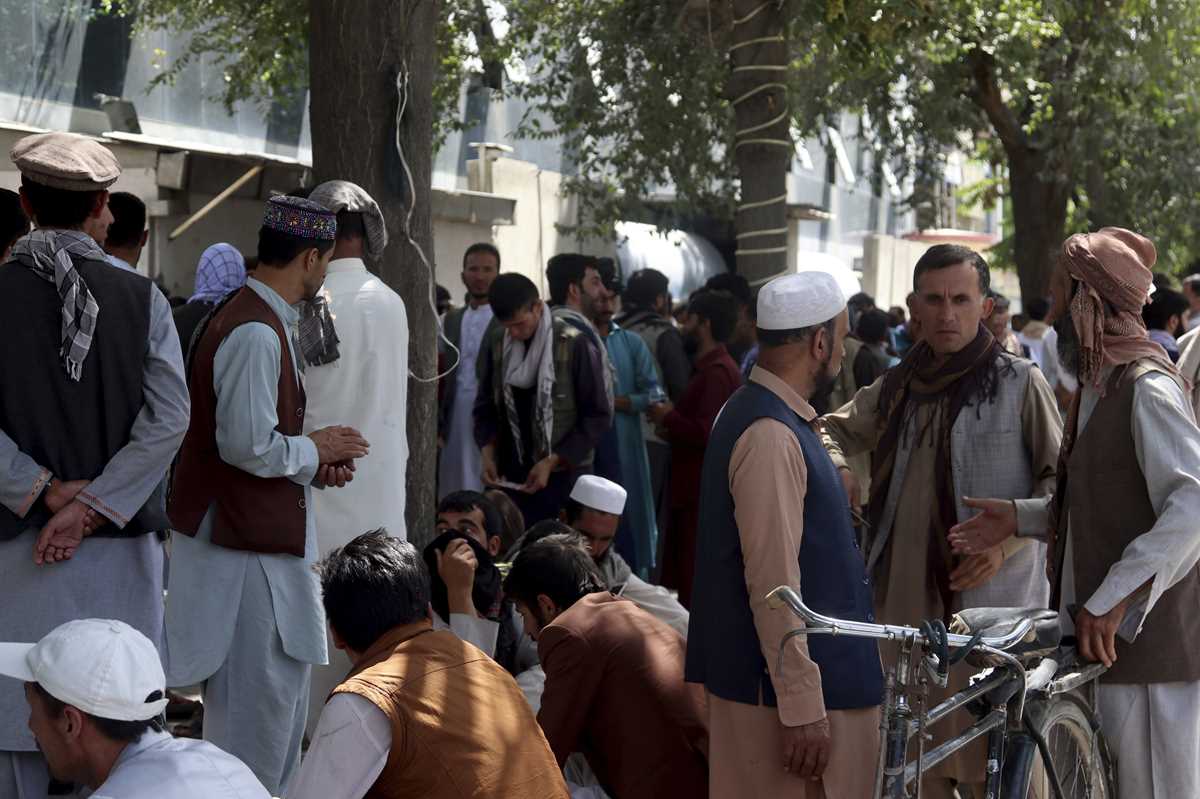 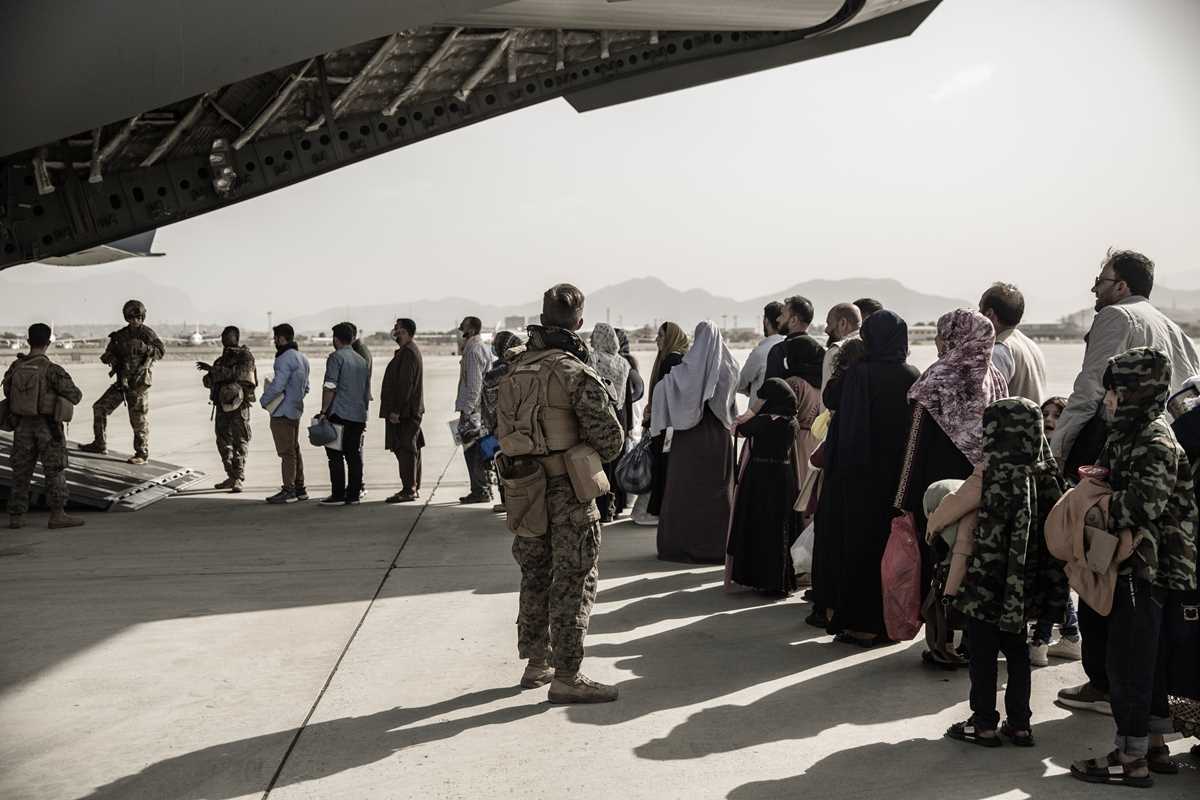 In this image provided by the U.S. Marine Corps, evacuees wait to board a Boeing C-17 Globemaster III during an evacuation at Hamid Karzai International Airport in Kabul, Afghanistan, Monday, Aug. 30. 2021. (Staff Sgt. Victor Mancilla/U.S. Marine Corps via AP)

KABUL, Afghanistan (AP) — The U.N.’s stockpiles of food in Afghanistan could run out this month, a senior official warned Wednesday, threatening to add a hunger crisis to the challenges facing the country’s new Taliban rulers as they endeavor to restore stability after decades of war.

About one third of the country’s population of 38 million doesn’t know if they will have a meal every day, according to Ramiz Alakbarov, the U.N.’s humanitarian chief in Afghanistan.

The U.N.’s World Food Program has brought in food and distributed it to tens of thousands of people in recent weeks, but with winter approaching and a drought ongoing, at least $200 million is needed urgently to be able to continue to feed the most vulnerable Afghans, he said.

“By the end of September, the stocks which the World Food Program has in the country will be out,” he told reporters at a virtual news conference. “We will not be able to provide those essential food items because we’ll be out of stocks.”

Earlier, U.N. officials said that of the $1.3 billion needed for overall aid efforts, only 39% has been received.

The Taliban, who seized control of the country ahead of the withdrawal of American forces this week, now must govern a nation that relies heavily on international aid and is in the midst of a worsening economic crisis. In addition to the concerns about food supplies, civil servants haven’t been paid in months and the local currency is losing value. Most of Afghanistan’s foreign reserves are held abroad and currently frozen.

Mohammad Sharif, a shopkeeper in the capital of Kabul, said that shops and markets there have supplies, but a major concern is rising food prices.

“If the situation continues like this and there is no government to control the prices, that will cause so many problems for local people,” he said.

In the wake of the U.S. pullout, many Afghans are anxiously waiting to see how the Taliban will rule. When they were last in power, before being driven out by the U.S.-led invasion in 2001, they imposed draconian restrictions, refusing to allow girls to go to school, largely confining women to their homes and banning television, music and even photography.

They buy gold stocks and get the inflation-proof benefits of gold, with a chance at better returns. And there’s one stock that gave investors a 2X return over gold the last 5 years.

But more recently, their leaders have sought to project a more moderate image. Schools have reopened to boys and girls, though Taliban officials have said they will study separately. Women are out on the streets wearing Islamic headscarves — as they always have — rather than the all-encompassing burqa the Taliban required in the past.

The challenges the Taliban face in reviving the economy could give Western nations leverage as they push the group to fulfill a pledge to form an inclusive government and guarantee women’s rights. The Taliban say they want to have good relations with other countries, including the United States.

Many Afghans fear the Taliban won’t make good on those pledges and also are concerned that the nation’s economic situation holds little opportunity. Tens of thousands sought to flee the country as a result in a harrowing airlift.

But thousands who had worked with the U.S. and its allies, as well as up to 200 Americans, remained in the country after the efforts ended with the last U.S. troops flying out of Kabul international airport just before midnight Monday.

President Joe Biden later defended his handling of the chaotic withdrawal and evacuation efforts, which saw spasms of violence, including a suicide bombing last week that killed 13 American service members and 169 Afghans. He said it was inevitable that the final departure from two decades of war would be difficult.

He said he remains committed to getting the Americans left behind out if they want. The Taliban have said they will allow people with legal documents to travel freely, but it remains to be seen whether any commercial airlines will be willing to offer service.

Bilal Karimi, an official member in the Taliban spokesman’s office, said Wednesday that a team of Turkish and Qatari technicians arrived in Kabul to help get the airport up and running again. Alakbarov, the U.N. humanitarian official, said that the United Nations is asking for access to the airport so it can deliver food and other supplies directly to the capital.

The Taliban also have to contend with the threat from the Islamic State group, which is far more radical and claimed responsibility for the bombing at the airport. The Taliban have pledged they won’t allow Afghanistan to be used as a base for attacks on other countries — a key U.S. demand since the militants once harbored the al-Qaida leaders who orchestrated the 9/11 attacks.

Army Gen. Mark Milley, chairman of the Joint Chiefs of Staff, said Wednesday that it was “possible” that the U.S. will have to coordinate with the Taliban on any counterterrorism strikes in Afghanistan in the future.