A policy announcement from Jackson Hole?… what Louis Navellier thinks about tapering… we just passed a milestone in this bull market

This week, all eyes will be on Jackson Hole, Wyoming, for clues about Fed policy direction.

Historically, the symposium has been an occasion in which Fed Chairs have announced policy changes. Some analysts believe we could see Fed Chairman Powell hint at what’s become one of the most significant issues overhanging markets today – the tapering of $80 billion in Treasury securities and $40 billion in mortgage-backed securities.

To taper, or not to taper, that is the question. And, unfortunately, the Federal Reserve does not yet have an answer.

As you may recall, at the Federal Open Market Committee (FOMC) meeting in June, Fed members kicked the “tapering” can down the road, as they want to see “substantial further progress” in employment before adjusting their quantitative easing policy.

This focus on employment numbers has come at the expense of a significant overshoot in inflation targets.

You’ll recall that the Fed had a target inflation number of 2%. Actual inflation has blown past that figure and remains elevated.

This has forced the Fed to massage its position on the “transitory” nature of today’s inflation.

***Based on these inflation numbers, we’re seeing some Fed hawks begin to push for tapering

Back to Louis for these details:

Given the rising inflation here in the U.S., the Fed is starting to experience some pushback from its more hawkish committee members, like Dallas Fed Presidential Robert Kaplan, who would like the Fed to begin tapering in the fall.

Interestingly, Democratic Senator Joe Manchin would also like the Fed to begin to tap the brakes and tried to put the central bank’s feet to the fire with a letter to Fed Chairman Jerome Powell.

He wrote, “With the recession over and our strong economic recovery well underway, I am increasingly alarmed that the Fed continues to inject record amounts of stimulus into our economy.”

He is also concerned that the Fed’s money printing “will lead to our economy overheating and to unavoidable inflation taxes that hard working Americans cannot afford.”

But if you believe this means that Powell is going to announce a tapering at Jackson Hole later this week, don’t be so sure.

Not only does Louis believe the Fed won’t taper this year, he doesn’t believe the official discussion will even begin until December.

Fed Chairman Jerome Powell is up for renewal in early 2022 and the Biden administration is still proposing spending trillions of dollars in the wake of its $1 trillion bipartisan infrastructure bill.

If the Fed started tapering just before the federal budget deficit soared, then it could complicate future Treasury auctions.

Louis might be right, but many economists are expecting otherwise.

The Federal Reserve will announce a plan to taper its asset purchases in September, according to a solid majority of economists polled by Reuters who also said the U.S. jobless rate would remain above its pre-pandemic level for at least a year.

Either way, we’ll be monitoring what happens in Jackson Hole and will bring you the outcome here in the Digest.

***Meanwhile, Friday marked a milestone in this bull market

Last Friday was the 200th session in the S&P 500 without a drawdown of 5% or more from a recent peak.

That’s the longest stretch since 2016, when the market went 404 sessions without falling by at least 5%.

Runs like these are rare. In fact, they have only occurred on only eight occasions in the S&P 500.

This can generate some anxiety – after all, logic would suggest that so much bullishness has to give way to bearishness at some point.

Here’s MarketWatch with more, analyzing what’s happened in past bullish runs like this:

The data set is very small but the S&P 500 has mostly climbed on a median basis, falling 1.2% in the following year but producing a median gain of 17.6% in a two-year period and 55% in the ensuing five-year period. 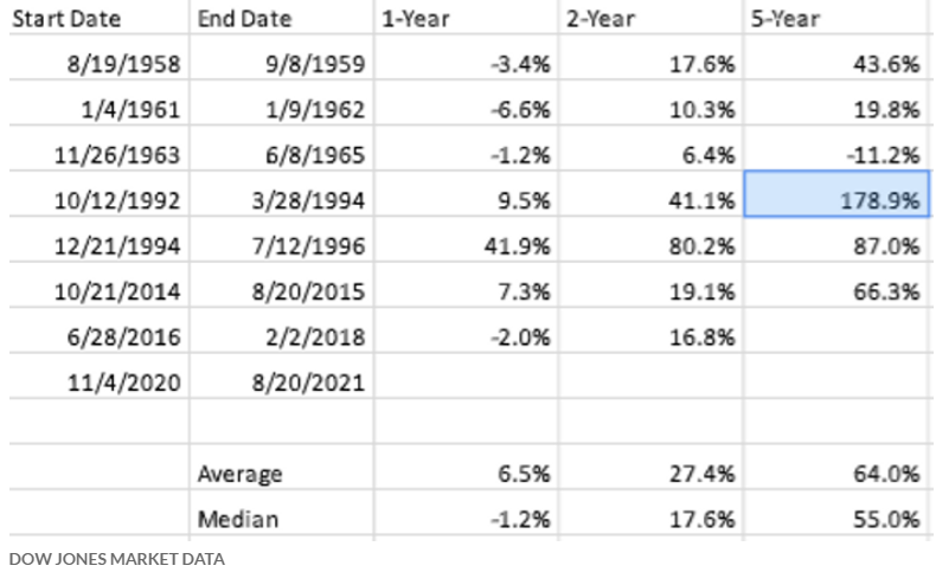 But do these numbers change at all when the market isn’t just bullish, but is hitting all-time highs?

As a market historian, Meb ran a backtest to determine what happens when you buy at all-time highs.

Is buying stocks at an all-time high a good idea?

No, it’s not a good idea, which should surprise no one.

The fact that it is a GREAT idea, well, that should surprise everyone.

Most investors fret when markets hit new highs, but should they?

The below is inspired by our friend Jake @ Econompic, who examined the following query:

“What if you bought stocks at all-time highs, otherwise you sat in the safety of government bonds?” Jake found that it turned out you actually OUTPERFORMED just sitting in stocks all the time.

I don’t think the takeaway is really that this is a system anyone would want to implement, but rather, an acknowledgement that all-time highs are nothing to be afraid of.

Bottom-line, the market is still showing lots of strength and upward momentum. It won’t always be this way, so let’s take advantage while we can.

Less than two weeks ago, on August 12, we highlighted the altcoin, Ada. It’s from a decentralized, public blockchain platform called Cardano. Ada (which we’ll refer to as “Cardano” for ease, since that’s the name most investors use) enables peer-to-peer transactions.

We highlighted Cardano because it was surging in the wake of news about its upcoming hard fork. Without getting too technical, a hard fork is basically a radical change to the way a blockchain network works, resulting in “the old way” and “the new way” – like a fork.

Though the gains were already huge, we suggested more were likely on the way.

Cardano was one of the original altcoins recommended in our cryptocurrency service, Ultimate Crypto. Subscribers who initiated a position according to the original recommendation back in January of 2020 are now sitting on a 7,580% return.

This is the highest return in this portfolio. But for additional context, the average return across the entire group of 15 altcoins is now 992%.

It increasingly looks like this crypto rally is the real deal, and that we could be in the early innings of a huge breakout like what we saw in 2013, 2017, and 2020.

We’ll keep you updated here in the Digest.